We now find ourselves in a unique media period: after the midterm election digestion, and before every news outlet begins twenty-four hour coverage of the 2012 election. So, this seems like a good time to talk about age-related voting patterns.

One of the most striking observations about the composition of voters in the midterm election was how few young people turned out, relative to their numbers in 2008. In 2008, about 18% of the voters were under thirty; about 16% were over 65. This time around, those under thirty made up closer to 11% of voters, and those over 65 made up closer to 23% of voters. (For context, the under 30 figure is close to the 2006 midterm participation of voters under 30 which was 12%– younger people do not relish midterm participation.) A widely circulating idea was that if young people had voted in the same proportions in 2010 as they had in 2008, the Democrats would not have suffered the magnitude of the defeat that they did. Underlying this statement was an assumption that younger people are more liberal and are thus more likely to vote for Democrats, while older people are more conservative, and thus more likely to vote for Republicans. This assumption prompts a question: are younger people are more likely to vote liberal because they are young, and when they age, they too will become more conservative (what demographers refer to as an “age effect”), or are they more likely to vote liberal because they belong to a new generation of voters which is at its core more liberal than previous generations were at that age (a “cohort effect”). (Another possible cause for differences in voting patterns is an event that affects everyone regardless of age (for example, 9/11), in a similar manner– a “period effect.”) 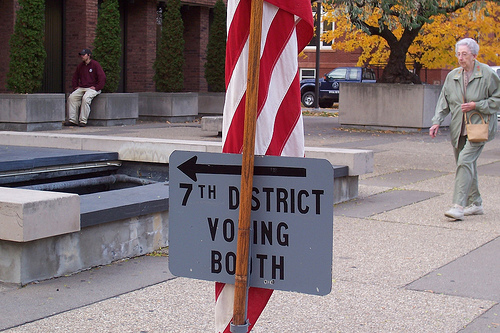 So what empirical evidence is there regarding the relationship between age and voting patterns? (I focus on research on the nature of how people vote over their lifetimes and across generations, instead of whether they vote, for which there is also a large literature.) The evidence is not definitive, at least in part because of the both geographical and temporal variety of the data used, and the lack of longitudinal data, but in general, the time during which you grew up (your generation or cohort) matters quite a bit for your later voting patterns.

There is limited support for the idea that voters necessarily become more conservative as they age.  Instead, most argue that much of the difference between older and younger voters should be attributed to cohort effects; people who grew up during a certain period (e.g. during the depression and WWII) are more likely to be conservative than those who grew up during a different period (e.g. post-WWII affluence) (see Braungart & Braungart 1986). Most likely, the effect age and generation on voting proclivities are interactive. Big events affect how age and generation matters: the voting patterns of individuals in eight post-Soviet countries in the elections of 1989 or 1990 reveal disproportionately conservative (in the sense of preserving the status quo) voting among older voters.  Younger voters, even wealthier younger voters who presumably enjoyed the benefits of previous Leninist regimes, selected change-oriented political parties at a much higher rate.  Schatz (2002) argues that this finding is due to a generational effect during the profound political transition; the effects of the Communist-era socialization of older voters were magnified in the context of the rapid social change.

Like many things, the effects of age and generation on voting patterns may not be consistently predictable and may differ by political context. A study comparing the voting patterns of British and West German voters in data from 1958 to 2002 finds a more nuanced picture that takes into account the nature of the electoral system. Goerres (2008) argues that age and generational effects are not alone sufficient to explain the voting patterns of older voters, because the extent to which these factors matter depends on the nature of the electoral system in which they participate (he discusses dealigned and proportional electoral systems in particular). (For reference, the study does not find evidence that voters choose more economically conservative parties as they age.)

What of the state of affairs in the U.S.?  A 2008 report from the New America Foundation uses data trends from 1972 on voting and political identity and finds a general age effect in previous generations where voters become more conservative as they age, but argues that there is a cohort effect for the “millennial” generation (which they define as those born between 1980 and 1986) such that millennials are substantially more liberal than earlier generations were at the same age).  For the effects of this generational shift, stay tuned…

Read more about determinants of voting behaviors here: Fabrigar & Krosnick on VOTING BEHAVIOR, in The Blackwell Encyclopedia of Social Psychology