What does ‘disruptive innovation’ disrupt? 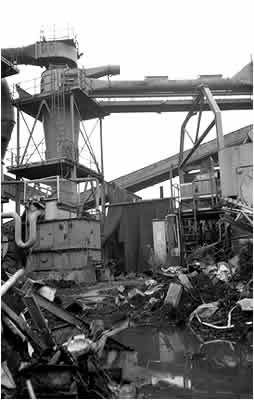 Image (c) Tim Edensor
“But if we look deeper, we see that our real technological style is dilapidation”   – Lee Vinson, Thesis #87

At the end of last week, Ellen MacArthur’s second Disruptive Innovation Festival came to a close, having dedicated the first three weeks of November “to exploring the ideas and innovations which are shaping our changing economy, connecting participants directly with the world’s most forward-looking start-ups, entrepreneurs, designers, thought-leaders and policymakers via a unique collaborative online format.” While the Festival was in full swing (although not apparently in response to it), Lee Vinson, a Science & Technology Studies professor at Stevens Institute of Technology (‘The Innovation University®’) published his wonderful, searing attack on innovation–babble, ‘95 Theses on Innovation.’ Innovation, argues Vinson, is the central ideology of our age. The innovation ideology presents technological change as the “key to both economic growth and quality of life,” and reaches its most pernicious form in Clayton Christensen’s ‘disruptive innovation’ concept, the apparent inspiration for MacArthur’s Festival.

Christensen’s work originally focused on ‘disruptive technologies’ before turning to ‘disruptive business models’, and more recently he has allied himself with Stuart L. Hart’s work on ‘Base of the Pyramid’ approaches to market–led development. Disruptive innovation, claim Hart and Christensen, is about creative creation and not creative destruction. Developing countries are the ideal place for disruptive innovators to ply their trade because the usual “stringent hurdles” for product innovation success do not apply where “nonconsumption is the alternative”. In fact, Vinson suggests, Christensen’s examples of disruptive innovation do not even fit his own criteria: “Christensen and his disciples dealt in snake oil for the innovation age”. Not only this, but anecdotally, ‘business school–types’ suggest that readers of Christensen’s work were more concerned with preventing disruption of their own businesses than they were with being ‘disrupters’, behaviour that would seem to support Thorstein Veblen’s contention that sabotage (and not innovation) is behind the prosperity of a great many businessmen.

Vinson echoes Evgeny Morozov and The Baffler’s John Summers and Corey Pein when he points to innovation ideology (rather than ‘neoliberalism’) as the principle or promise around which both Left and Right politicians have been able to unite (not to mention cyber libertarians), advancing policies in the name of fostering entrepreneurship which nonetheless tend to exacerbate inequality. Never mind that a great many impactful and profitable tech innovations have been incubated by government funding, what the poor really need is technical education – or perhaps development of the ‘non–cognitive’ skills or ‘character’ that can make anyone a (disruptive) innovator. But, on the bright side, a change may already be underway. “Smart speakers”, writes Vinson in his 94th Thesis, “know that if they say ‘innovation’ their listeners will burn red with embarrassment and guffaw behind their backs.” Although, perhaps not at the Disruptive Innovation Festival. So precisely what kind of ‘disruptive innovation’ is the Festival peddling, and what relation does it have to the manner in which contemporary sociologists have written about (or used the concept of) ‘innovation’?

If you were to single out a session from the DIF that seems to provide a ‘proof’ for Vinson’s Theses, it would perhaps be Nicolas Forsans’ Business in Times of Disruption: Disruptive Innovation and its Impacts (available online until 28/11/2015). “Technology,” we are told, is “disrupting all areas of business in all industries…In a few years time I bet all of us will have a 3D printer in our kitchen.” Entrepreneurial capitalism is replacing managerial capitalism and the tech revolution is making firms themselves outmoded, since anyone can access the innovators they need through online markets. (News, perhaps, to Royal Dutch Shell, 26th on the FT Global 500 with a 150 billion Euro market capitalization and proud winner of 4th place in Citi’s July 2015 survey of Disruptive Innovations).

A techno–utopianism or ‘solutionism’ similar to Forsans’ was in evidence during Ellen MacArthur’s closing speech, albeit tempered by an awareness that technological innovation itself does not provide for an image of the good society: “we can pretty much do what we like…if we can build anything using a 3D printer, if we can design anything, if we can solve any problem using artificial intelligence, then where do want that to take us?” Elsewhere in the festival, panels were held on issues of significant and immediate concern for social policy and social justice, such as ‘disrupting’ monetary systems, and universal tax credits – the slightly more conservative cousin of basic income. But what is gained, and what is obscured, by gathering these discussions together (along with those on the Internet of Things, the Circular Economy, and freelance business consultancy through online platforms) under the rubric of ‘disruptive innovation’?

Before there was ‘disruptive’ innovation, there was just innovation, and that, we were also told, was a good thing. Nobel laureate Robert Merton, who contributed to the development of the Black–Scholes option pricing model in the 1970s, wrote in 1995 that financial innovations were “the force driving the global financial system towards its goal of greater economic efficiency. In particular, innovations involving derivatives can improve efficiency by expanding opportunities for risk sharing”. Today, looking back at 2008, Merton’s vision looks bewilderingly naïve. In response to an awareness that not all financial innovations are quite so beneficent, Margaret Armstrong and her colleagues have written about the possibility of using the New Product Committees that are increasingly required or recommended by financial regulators to develop a “more responsible way to handle financial innovation.” Among their recommendations is the introduction of procedures similar to public forums in which the risks of new technologies are debated and discussed. Along these lines New Product Committees would welcome branch employees or retail investors who might be “indirectly impacted by a financial catastrophe generated by the innovation” – although this, they suggest is “a maximalist view, probably an impractical one”. And it is immediately apparent that even in this ‘maximalist’ view, a fairly narrow net is cast around those to whom financial innovators must be responsible (those who might be ‘indirectly impacted’).

Christensen’s ‘disruptive’ innovations often proved to be nothing of the sort, and acted as lessons for those seeking to avoid the disruption of their profit–generating enterprises, and it seems that ‘responsible innovation’ discourse and policy in Europe has taken a similar course. Stevienna de Saille has recently described how an originally broad, participatory vision of ‘responsible innovation’ policy in Europe was narrowed to the point where ‘society’ and ‘the public’ have been conflated with ‘the market’, and there is a tendency “to assume that successful uptake of a product or service proves that it is socially beneficial.”

This, as Julie Froud and her colleagues have argued, is a deeply problematic assumption. Froud et al. use the notion of ‘social innovation’ precisely to upset the conventional association between economic ‘innovation’ and welfare– or efficiency–increasing processes, and suggest that “finance as privately led social innovation has failed”. The so–called ‘democratisation of finance’ in the USA during the 1990s involved a great deal of innovation in credit products that found a market in low–income families whose social security needs (such as pension provision) were not met by a state welfare system, and whose incomes were insufficient to allow for savings that would smooth their earnings over the life–course. These credit products often involved creating more precarity and indebtedness (leasing cars rather than buying them is cheaper, but leaves the lessee with no car to sell at the end, more debt, and a worse credit rating), which served as a spur to develop some of the ‘innovative’ securitisation techniques implicated in the crisis. Thus, Froud and her colleagues argue, “Social protection should include constraints on finance as social innovation.” Not all innovations – however disruptive – are to be celebrated.

Equally, of course, innovation is not necessarily bad. But the fetishization of innovation (and disruption) to the exclusion of questions about whether ‘disruptive’ innovations are necessarily the product of nimble, flexible private sector entrepreneurs (rather than the ‘patient capital’ provided by state agencies), whether they ‘disrupt’ anything at all (rather than accelerate existing economic processes), and whether disruption is necessarily a positive thing (is fracking not enabled by ‘disruptive’ technical innovations? Is not Amazon’s approach to its employees part of a ‘disruptive’ business model?), is certainly disturbing. And as Vinson so rightly points out, much of what social commentators have gathered together as ‘neoliberalism’ (self–responsibilization, labour de–regulation, tax breaks for ‘innovative’ firms) is animated and enabled by apparent enthusiasm for ‘innovation’ across the party political spectrum. One consequence is that there is an apparent unwillingness to acknowledge that which geographers like Caitlin DeSilvey, Tim Edensor and Bradley Garrett point us towards: ruination, decay and obsolescence reveal far more about our political and technological organisation than innovation–babble might. Indeed, Vinson suggests that “if we look deeper, we see that our real technological style is dilapidation. Our technological values are best embodied by collapsing buildings, rotting bridges, and abandoned, trash-strewn lots.” In her closing speech at the DIF, Ellen MacArthur praised all the makers, ‘doers’ and entrepreneurs at the Festival. We may wish to temper her enthusiasm with reference to Vinson’s Thesis #82, by asking why it is that “Our culture degrades those involved with maintenance and repair. Innovation is for the great ones. Taking care of what already exists is for losers, burnouts, slackers.”