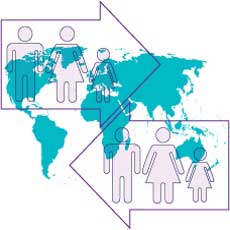 The relationship between gender and migration is a hot topic in the social sciences and humanities. Increasingly, more books and articles, as well as conferences and working groups of scholars, tackle how gender intersects with migratory processes. For example, I am part of a group of 2011 Social Science Research Council (SSRC) Dissertation Proposal Development fellows, all of whom situate their work in the field of “gender and migration.” The rise of this type of work can be attributed to the acknowledgement of feminist theory in mainstream social sciences and humanities. In terms of this particular field, scholars recognized that works on migration had a masculine bias; the research overlooked women’s experiences. In response, we have seen a proliferation of works that address both male and female (though mostly female) migrants and the gendered components of their movements.

Yet, despite the increase in these works, Stephanie Nawyn, in her 2010 Sociology Compass article Gender and Migration: Integrating Feminist Theory into Migration Studies , explains that mainstream sociological migration studies has not fully acknowledged a feminist theoretical perspective. Most works from the mainstream describe the economic motivations and push/pull factors of migration; these are topics that surely have a gendered component, but few works adequately incorporate gender into their analyses. In fact, Nawn explains that we still know very little about why people migrate (theories of migration) and how migrants improve their social statuses (theories of assimilation) from a feminist perspective.

Nawyn’s discovery is not surprising. This is certainly not the first time that scholars have pointed out that feminist theory is missing or undervalued in sociology. Stacey and Thorne’s article, The Missing Feminist Revolution in Sociology, comes to mind. But what I found most interesting about Nawyn’s article was her suggestion for future directions. Rather than looking at gender as an individual status or attribute, she suggests that scholars analyze gender as “a system of power relations that permeates every aspect of the migration experience.”

How might migration scholars move past conceptualizing gender as a binary variable measuring an individual’s status to analyzing gender as a system of power relations? Nawyn suggests that ethnographic work is particularly useful for parsing out gender as a dynamic concept that shapes experiences of migration at the structural and individual level. But Nawyn is not convinced that ethnographic research is enough. She also wants quantitative research with large scale, macro data sets. While quantitative researchers generally utilize gender as a binary variable (measured as male or female, man or woman), Nawyn would like to see researchers take a feminist approach when designing their studies. For example, a feminist perspective predicts that the presence of children will have different impacts on men’s and women’s migration experiences. Since childrearing is a gendered phenomenon, men and women will have different responsibilities and roles with regard to their children, and thus men and women will have different earnings in the migration process. A feminist perspective would allow researchers to choose appropriate variables and ask the right questions when investigating gender and migration.

Nawyn, therefore, suggests that we need better survey research on gender and migration. I am not a survey methodologist and so I am curious to know how other people think that we can achieve Nawyn’s call for analyzing gender as a system of power relations through macro-level quantitative analysis. What questions could a researcher ask to achieve Nawyn’s goal?