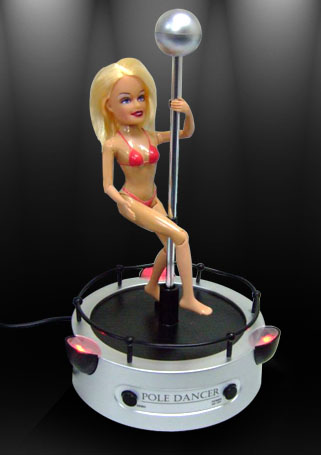 Despite such clubs being banned elsewhere, the student pole dancing club was recently soliciting new members at my university’s freshers’ fair. The toxic effects on gender relations of pole dancing’s explicit objectification of women within the sex-industry have been extensively discussed elsewhere – see the Object campaign for example. Pole dancing has been adopted into the body-sculpting repertories of fitness clubs; it is, however, impossible to decouple it from its problematic sex-industry heritage.

Southampton’s student intake, as a Russell Group university, is predominately middle class. Without evidence, I’m unable to say however, whether the  pole dancing society exists as ironic fitness pursuit offering a frisson of transgression for affluent students or an opportunity for those students desperate to meet the rising cost of university fees to acquire a valuable skill for free.  I can say the society’s presence is evidence of the normalisation of pole dancing – a process that is reinforced by the idea sex industry pole dancers are empowered women parting silly lascivious men from their cash. The purpose of this post is to use sociological research to help expose this as a myth and contextualise pole dancing’s power relations in terms of social class.

The reality, as a paper in the British Journal of Sociology (Sanders & Hardy (2012)) shows, is somewhat different. The paper’s authors describe the recent history of the strip industry. Initially, a relatively small number of clubs in the UK such as Stringfellows in London that peddled expensive fantasies of exclusivity and luxury.  These were strip clubs “coded with messages to suggest class, sophistication and style” where the relatively high cost of alcohol helped “deter the working-class drinker” (p524). Back then Sanders & Hardy argue, for at least some women, stripping was indeed a lucrative job. Since the turn of the century, favourable market conditions and licencing laws transformed nocturnal town centres into leisure destinations. A nationwide expansion of strip clubs – there are now over 250 in the UK including chains – met the demand for young men keen to spend their disposable income on aspirational hedonism such as champagne and private dancers.

But this proliferation of clubs combined with a drop in living standards for the majority of Britons meant dwindling door receipts even for market leaders. In response, clubs abandoned many of the pretences of exclusivity, downgraded the cost of a ‘luxury night out’ and encouraged custom from a broader socio-economic demographic. This means club owners today continue to reap financial rewards by exploiting the powerless; the dancers who have seen a dramatic erosion of their occupational status, conditions and pay (Sanders & Hardy, 2012).   Having been denied any bargaining power by market conditions the dancers have, more than ever before, become disposable commodities – particularly economic migrants and students who are unable to rely on their parents for money. In other words people who lack the forms of capital associated with higher social class are exposed to the all the risks.

This is class in microcosm; in today’s neoliberal volatile job markets the less people have to fall back on in terms of education and training, savings and social contacts:  the fewer forms of capital they have available the more exposed they are to risk. As Curran (2013) said in his recent critique of Beck, risk “follows the contours of class”: this is never more apparent than in the sex industry. Far from being empowered neo-feminists pole dancers, the evidence tells us, have taken their place in the Britain’s “precariat” class (Savage et al., 2013) and the university pole dancing society highlights an uncomfortable contrast between those who possibly pole dance for fun and those who definintely pole dance to make ends meet.