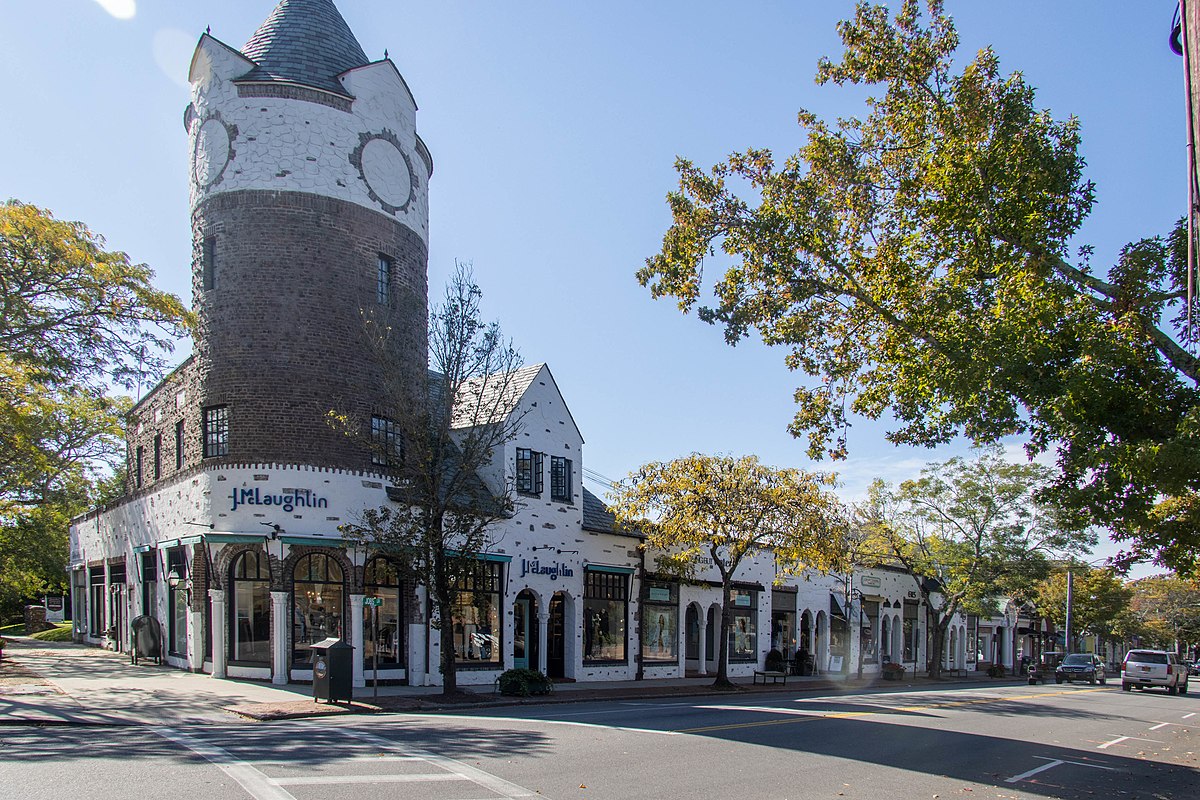 The shopping district in Southampton, New York. While the town provides some affordable housing, retailers cater to affluent residents and visitors.
https://commons.wikimedia.org/wiki/File:Southampton_Village_Historic_District_Tower_01.jpg

More than fifty years after passage of the Fair Housing Act, many Americans continue to live in neighborhoods that are segregated by race/ethnicity and class (Loh et al. 2020). How does this spatial separation come about, and what would it take to meaningfully integrate neighborhoods? Is providing affordable housing enough, or do we need to think about other dimensions of belonging within a community, such as shared opportunities for recreation, consumption, or making friends? Questions like these are of central importance to sociologists, and are crucial to those who live in communities characterized by social class segregation, gentrification, and other residential patterns that result in differential allocation of services, civic engagement, and quality of life.

The experience of Liza Coppola, a housing services worker and musician living in Southampton New York, begs precisely these questions. Recently profiled in The New York Times’s “Renters” series, Ms. Coppola lives in the Sandy Hollow Cove Apartments, a subsidized development for Southampton residents who earn less than 80% of the area’s median income. While Ms. Coppola considers herself fortunate to have secured an affordable unit in this expensive enclave, finding housing has not meant that she has access to all the community has to offer. The area’s private beaches require membership fees outside of her budget, and goods at local grocery stores and farm stands are priced out of her reach. “I’m not paying $15 for a quart of strawberries,” she said. “Not doing it.” Social relationships, too, have been difficult to develop, and she misses both her family in Queens, and her former community in another part of Long Island (Gibson, 2022).

The challenges described in the Times profile reveal ways that economic and class segregation work in US communities. Neighborhoods, and even entire towns and cities, are often home to households of similar economic status. As we detail in our article “On Place and Privilege: Varieties of Affluence in Cities and Neighborhoods,” (Paulsen & Stuber, 2022) this is frequently by design. Suburban developments were created, in part, to create homogeneous enclaves where white, affluent households could escape early cities’ crowding, diversity, and unpredictability. Deed restrictions and restrictive covenants dictated who could live in many of these areas, barring racial, ethnic, and religious minorities from both elite enclaves and middle-class suburbs. Development practices and zoning codes further encouraged segregation: building lots were sized and priced to exclude poor and working-class residents, and apartments and other affordable housing types were explicitly prohibited in favor of single-family homes. These types of practices, referred to as exclusionary zoning, are among the forces that created and sustain economic and racial segregation in the US. Many of these practices persist today.

Enclaves such as Southampton, where Ms. Coppola lives, and Bedford, where geographers James and Nancy Duncan studied planning practices and exclusion, have median household incomes nearly twice that of the state of New York, and do not reflect its racial and ethnic diversity: each is about 70% non-Hispanic white, compared to 52.5% for the state. In some of these locales, affluent residents have organized to limit the visibility of immigrants and people of color—for instance, by restricting where day laborers can gather to seek work, discouraging soccer games, or pursuing evictions of overcrowded or substandard housing, which is often the only available housing option (Dolgon, 2005; Duncan & Duncan, 2004).

That low-wage workers find themselves with limited housing choices is no surprise given the housing types common within these enclaves. In Southampton, for instance, only 16.5% of occupied properties are rentals, and the median home purchase price is over $1.6 million (US Census, n.d.). Scarce rental housing is a common feature of affluent communities. As a result, the workers who provide these places with important services—landscapers, childcare workers, and housecleaners, but also teachers, first responders, and government employees—cannot find or afford housing near their workplaces. Some low-wage workers secure housing in distant but more affordable communities, then face long, and often expensive, commutes. Writing about Aspen, Colorado, Jenny Stuber (2021) describes the two-hour (each way) bus journey made by Latino service- and construction workers who are crucial to the town’s economy, but cannot afford to live there. This spatial mismatch, in which workers live in one place and hold jobs in another, poses challenges not only to employees and jobseekers but also employers. 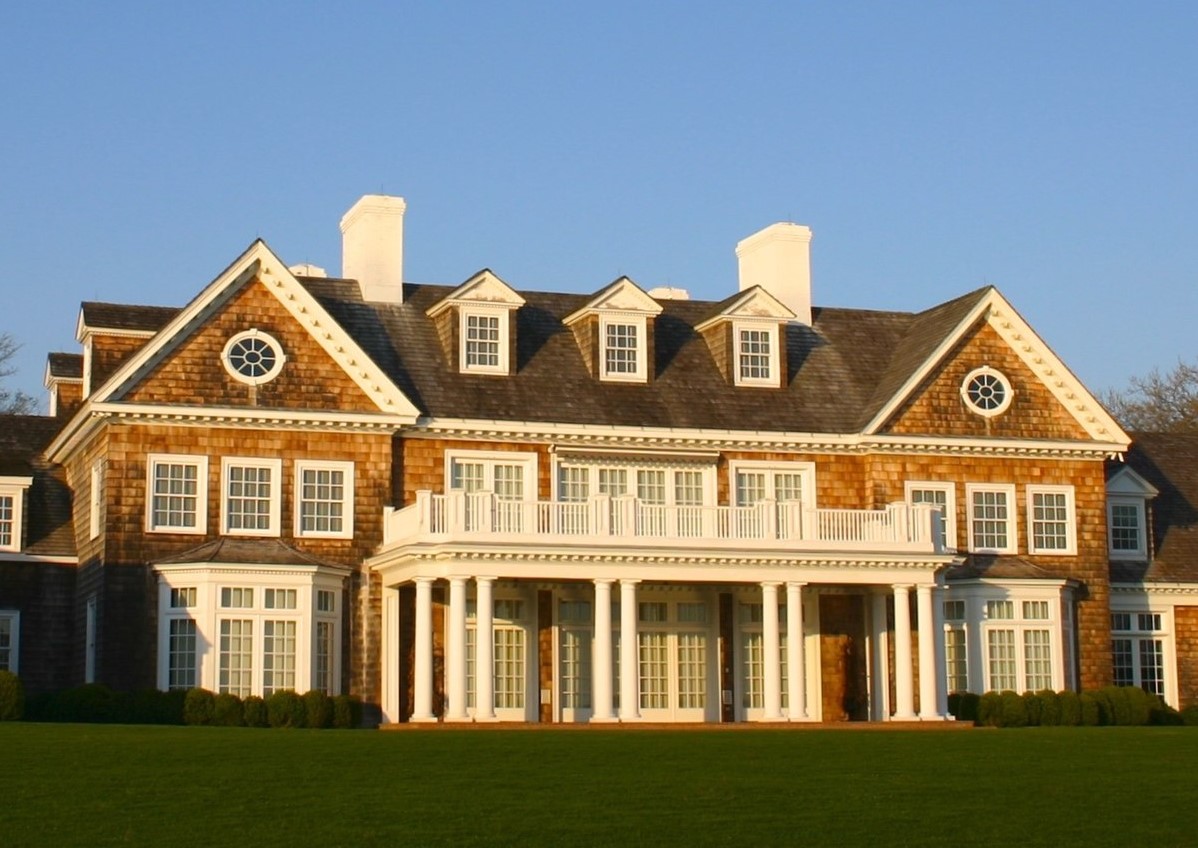 Southampton, Long Island, is an enclave known for luxurious homes like this. Affordable dwellings are hard to come by, and lower income residents may not have access to important aspects of community life.
https://commons.wikimedia.org/wiki/File:Longview_-_Garden_Facade_-_Southampton_NY.JPG

One solution to this problem is to incorporate affordable and workforce housing within or near elite enclaves. This is no easy task: proposals to build affordable housing in affluent areas, whether subsidized units, or multi-family rentals, are routinely opposed by current residents who fear declining property values, increased crime, or other diminishments to quality of life (Koebel et al., 2004; Manville & Monkkonen, 2021). Stereotypical ideas about the people who would reside in affordable units can motivate residents’ concerns and opposition to construction (Tighe, 2012). Residents may approve of affordable housing in principle, but still not want it nearby: a phenomenon that has been dubbed NIMBY, or “not in my backyard.” Indeed, this was the response of many of the Bedford, New York, residents in Duncan and Duncan’s study, who saw the need for affordable units but supported their construction only in marginal areas of town (Duncan & Duncan, 2004). While studies and media accounts suggest that introducing affordable housing does not negatively impact communities (Eligon, 2020; Massey et al., 2013), residents’ organized opposition can still delay, alter, or prevent their construction (Nguyen et al., 2013; Scally & Tighe, 2015).

Another approach is to address the legacy of exclusionary zoning through new initiatives that would allow buildings other than single-family homes. Some cities are encouraging construction of accessory dwelling units (ADUs)—small, independent dwellings constructed on the same lot as a single-family home. ADUs can serve as affordable rentals, and the income they generate can benefit homeowners in expensive markets. Other approaches are more comprehensive and ambitious. For instance, in 2021, California passed legislation that would allow for increased housing densities throughout the state, including small multi-family structures like duplexes in areas once limited to single-family homes (Dougherty, 2021).

When successful, affordable housing programs can ensure that lower-wage workers are able to live near their jobs. For their children, living in more affluent communities can significantly enhance their chances of social mobility. The decades-long Moving to Opportunity studies show that when lower-income kids move to higher-income neighborhoods prior age 12, they are more likely to graduate high school, have higher earnings, and more likely to marry (Chetty, Hendren, and Katz 2016). This was true, even when their own parents did not substantially improve their incomes. This research provides clear support for inclusionary zoning and mixed-income housing.

But Ms. Coppola’s case raises important questions about the degree to which residents who live in affordable units are fully included in their communities and what it means to belong. Living in a community is not only about having a residence, it’s also about being able to participate in community life. Access to public spaces—parks, beaches, even street corners—is an important element of belonging. The privatization and regulation of public spaces can effectively exclude lower income residents, and can prove especially hostile to people of color. Consumption is another important element of belonging. Residents connect to places as they enjoy a meal out, gather with friends at a bar or coffee shop, and purchase routine necessities like groceries, clothes, or a haircut. If residents cannot afford these activities locally, their places of residence are no longer as useful to them, practically or socially. We might also see in these communities lower levels of place attachment, the “emotional or affective bonds between people and places” that are created as people engage in routines of daily life (Paulsen, 2019).

Observations like these continue to complicate sociological understandings of how socioeconomic inequalities impact community and a sense of place. Instead of a simple story of class exclusion in a super-affluent place like Southampton, we see that socioeconomic integration and class segregation can exist side-by-side within the same community.

Dolgon, C. (2005). The End of the Hamptons: Scenes from the Class Struggle in America’s Paradise. NYU Press.

Gibson, D. W. (2022, May 9). The Apartment Is Affordable, but the Neighborhood Sure Isn’t. The New York Times. https://www.nytimes.com/2022/05/09/realestate/renters-shinnecock-southampton.html

Stuber, J. (2021). Aspen and the American Dream: How One Town Manages Inequality in the Era of Supergentrification. Univ of California Press.