The Black Keys: Keeping It Real 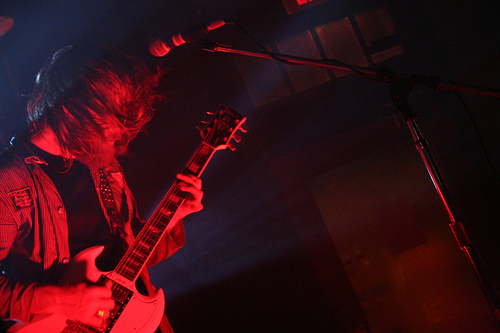 Dan Auerbach of The Black Keys, from Wikimedia Commons

The Black Keys are one of the most familiar bands in rock music right now. In addition to being popular and well-liked in indie rock and hipster circles, their moody sound is ubiquitously present in an array of TV ads (like Zales and Cadillac) and film (Twilight Saga: Eclipse) soundtracks. In a recent Fresh Air episode (January 31, 2011) host Terry Gross asks the two members of The Black Keys, Dan Auerbach and Patrick Carney, if they had been accused of “selling out” as a result of their willingness to allow their music to be used in the hocking of commercial products like underwear or big budget vampire films. What struck me as Sociologically interesting in this question is the assumption that The Black Keys, as opposed to Sting or Katy Perry, should experience the commercialization of their music as problematic.

The tension here is the perennial specter of authenticity that marks so many youth subcultures. The notion of authenticity—that is, an individual or group’s status as a genuine and committed member of the subculture—is one that sociologists of culture have grappled with for decades. Starting with Dick Hebdige in 1979, authenticity has routinely been linked in one way or another to a demonstrated opposition between the subcultural and the mainstream. Although punks and mods are less visible these days the newly emergent umbrella terms “alternative” and “indie” rock have come to represent some level of hostility to pop music, including its practice of licensing songs for use in commercial advertisements.

In the case of rock subcultures, authenticity is generally measured by the Do-It-Yourself (DIY) approach to making music that generally involve lo-fi recordings and small record labels. In these regards, The Black Keys can espouse details that support their claim to an indie aesthetic: their first several records were on independent labels and their albums continue to be relatively gritty in production style and overall sound. In their interview with Terry Gross they also affiliate themselves with authentic, oppositional rock subculture with stories about practicing in a basement, smoking hash in a hostel, peeing in their tour van, and playing for empty rooms. Yet these aspects of their band’s philosophy and experiences are glossed over, The Black Keys claim, by their willingness to help sell mobile phones with their songs. Patrick Carney, from the Terry Gross interview…

We’ve been accused by a lot of 17-year old boys of being sell outs lately on Facebook, I’ve noticed… What they don’t see is that we made [Brothers] in a cinderblock building in the middle of nowhere in Alabama, with five microphones and a guitar amp and a drum set… [I]t’s an honest way of approaching making music.

As Ryan Hibbett (2005) noted in his work on indie rock that in addition to the integrity of the process there is a premium on (the perceived) obscurity of the musical products. This principle appears to have been brought under fire as the commercial viability of indie rock has increased. The tension between playing music for a subcultural audience and making money, however, is not a universal issue. Hip hop subculture, for instance, is riddled with its own concerns about authenticity although they center less on doing it yourself and more on “keeping it real.” An art form produced in the context of racial oppression and poverty—as opposed to the middle-class malaise that drove much of punk’s early development—hip-hop was less about shunning the mainstream than challenging it to accept a new voice into its ranks. In hip-hop, the integrity of the musical process has more to do with representing one’s origins pridefully rather than remaining tethered to them.

When Carney cites “driving around in a 1994 Plymouth Grand Voyager” and living in a “modest apartment” as his band was approached with licensing offers, he supports an image of himself as hailing from the lower/working class. Dan Auerbach reinforces this claim, stating that their first advertising deal was worth “more money than, you know, both of our parents make a year combined.” For them, making music on their own terms in a log cabin, and then being offered a lucrative living for making those records, does not appear to be a contradiction. Their talent serves as an entrée into the mainstream. Further, both Carney and Auerbach acknowledge in their interview that more so than even a shared interest in blues or punk it was a common affinity for hip-hop legends Wu-Tang Clan that first drove their attempts to make music together. They also are known for collaborating with artists like RZA, Q Tip, and Mos Def. Their albums are not produced by Steve Albini or James Murphy but by Danger Mouse. Perhaps The Black Keys represent an emerging model of indie rock credibility that is more firmly established in the hip hop subculture’s image of authenticity.

Can a band that has sold over a million records, won a Grammy, and graced dozens of Television ads be authentically indie or alternative? Are we starting to see a shift from a simple refusal to engage with the mainstream, to a more coy and opportunistic willingness to play for pay?

Fresh Air with The Black Keys