Religion, Abortion, and the Law in the United States 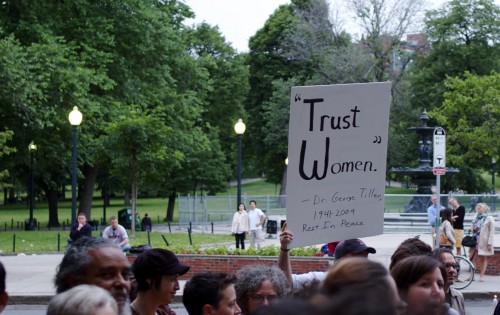 If one’s religion teaches that abortion is murder, is the believer then obligated to stop abortions from happening, by any means necessary? Today, a Kansas judge decided that this is not a viable defense strategy under the law. On May 31, Kansas resident Scott Roeder is accused of shooting and killing Dr. George Tiller.

Roeder had wished to use something that has been termed the “necessity defense,” which would justify using lethal force. Although the judge’s reasoning for not allowing the defense is not spelled out, a guess would be that it would open the door for other potential killers to use such a defense. Also this week, an Oklahoma judge temporarily blocked the implementation of a new law that would require women to answer a number of demographic and relationship questions, the answers to which would be posted on a publicly-accessible website. Critics argue that, while the information is ostensibly anonymous, those living in small towns could be identified.

It is becoming increasingly difficult for anti-abortion advocates to use laws to advance their agendas. With the separation of church and state in the U.S., they must use other tactics. In the murder case, the judge likely did not wish to set a pro-murder precedent. In the Oklahoma case, the information was supposedly going to be used to identify those populations at risk for unwanted pregnancies. Yet anyone familiar with ethical social science methodologies would never gather information that would cause potential harm to human subjects (in this case, identification and negative outcomes that could result).

Unraveling Religious Worldviews: The Relationship between Images of God and Political Ideology in a Cross-Cultural Analysis by Paul Froese and Christopher Bader