Learning to Fail or Failing to Learn 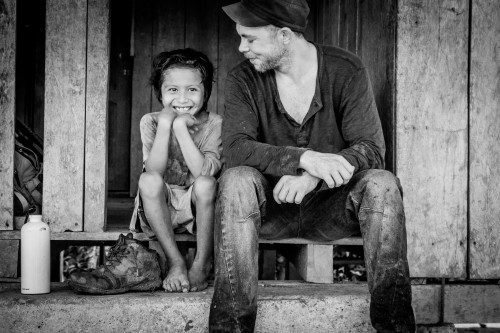 Here is a picture of me and a Sapara boy taken on my camera by a girl in Jandiayacu, the Sapara community where I began my research.

Nobody really talks about how or why his or her research failed, or what you are supposed to do when you can see that the fieldwork you are in the middle of might be doomed. Those who decide to leave their research uncompleted rarely write up their experiences, and so the lessons that can be learnt about what not to do during your research, and how to avoid a similar outcome, are forever lost in the private notebooks of the ‘failed’ researcher (Wolcott, 2005, p. 214). I am sure I can’t be the first person to be six months into their fieldwork and be seriously doubting the entire process and already wondering if it is salvageable. So I have decided to write a post about why I think my research is going wrong.

I expect a lot of people will read this and think that what I am experiencing is normal: self-doubt, a lack of confidence, or some form of impostor phenomenon (which seems to be pervasive among academics; see e.g. Fraenza, 2014). Yes, I do experience all of these, as I think most PhD researchers do, but it isn’t what I am referring to here. It is a real concern. Attrition rates of PhD programmes are estimated to be between thirty and fifty per cent, meaning that up to half of all research students will never complete their course (Morrison, 2014), but information about what really went wrong for those who were unable to complete is difficult to find. Until recently, my own research seemed to be going well, but I have begun to worry that I might need to start all over again from scratch, which I definitely don’t want (and can’t afford) to do.

A few months ago, I began working with an NGO (initially as a volunteer and then as a ‘technical assistant’), which I saw primarily as a means of gaining access to, and beginning to build relationships with, a ‘hard-to-reach’ [1] community. As part of this, I took part in a research project on behalf of the NGO (see my earlier post), the methodology, research questions, budget and timescales of which had all been designed prior to me joining. My role was to assist the local project coordinator in conducting the research and then to work with them on producing a number of written ‘products’. Unfortunately (as I explained in the earlier post), the methodology, timescales and budget were not suitable for research in the community and some of the products requested were, I came to realise, entirely unfeasible.

It soon came to light that I was not an ‘assistant’, but rather was expected to conduct the research alone. The three-day workshop turned into two separate visits, during which I attempted (unsuccessfully) to apply the prescribed methodology. One month turned into two… then three, and I still couldn’t provide the products requested by the organisation. In the end, I did the research as best I could, managed the budget and the logistics of the workshops, wrote a 10,000-word report and travelled to Peru to present my findings at a conference. My main findings, however, were that the project itself was seriously flawed from a methodological perspective. It was culturally insensitive, heavily restricted by budgetary and time constraints, and appeared to me to be a continuation of colonial approaches to working with indigenous communities (see e.g. Smith, 1999). Ironically, the imposition of ideology and external ideas of ‘development’ was precisely what the research was supposed to be questioning. Yet, in practice, the methodology sought to extract ‘useful’ information and then advise the community how to go about dealing with complex socio-political issues (i.e. how to negotiate with the UN REDD+ project) by an outsider (me) writing up a two-year work plan. I was simply not in a position where I felt I could or should do this. So I didn’t. Consequently, I didn’t provide some of the products outlined in my contract and the research project was, in my mind, a failure.

This has had a major impact on my own longer-term research, and particularly my relationship with the community with which I intended to work. Though I had been positioned as an ‘expert’, I am certainly not an expert on Sapara culture, history and politics (I will be discussing experts and impostors in more detail in my next post). What I do have, though, is some knowledge of the methodological issues associated with research. Yet when I raised these issues with the NGO it had little impact; the important thing was the product, not the process, and because the products have not been provided, I have not been paid. Though this is not ideal, I can (begrudgingly) understand it, as in the end I did not fulfil my contractual obligations. A bigger issue, though, is that because I have not provided the products, the community leaders that have participated in the research might not be fully compensated for their time in the way they were expecting. Of course, this has had an impact on my relationship with the community. I feel as though I have let them down, I am concerned that they might feel that they have been taken advantage of, and I am worried that they might think I have lied to them.

I don’t think this outcome is unusual. All NGOs in the development industry (and it really is an industry) operate within a highly competitive market. They must produce report after report and write one funding bid after another just to stay afloat. Sadly, though, proving your worth to donor organisations and other funders does not necessarily translate to genuine efficacy at the community level. Instead, it can often be a major drain on the funds the NGO has worked so hard to secure in the first place as it contributes to the excessive amount of NGO resources that are spent on administration and fund raising. Moreover, it means that donors end up deciding (by providing funds or not) which projects are legitimate and which are not, while the opinions of the people who are directly affected are treated as less important (Crack, 2013, discusses some of the issues relating to accountability deficits in more detail).

From a personal perspective, this setback has affected my confidence and has caused me to become even more critical of the role of research in indigenous communities, which in turn has had an impact on my motivation. However, Atkinson, Coffey & Delamont (2004, p. 56) argue that this type of difficulty in fieldwork should not really be viewed as failure because it provides “concrete examples of more general processes at work, revealing the self as intimately part of, rather than adjunct to, fieldwork […] They are not even joined at the hip – they share the same spaces”. What I have experienced here is just that; an example of the perpetuation of violent colonial approaches to research that prioritise written reports and securing future funds over real impact, and, though I could see this happening at the time and knew that it was unethical (and despite being the supposed ‘expert’ in the situation) I felt powerless to do anything about it.

I think many people in a similar situation might have either abandoned this research, or just provided the products the organisation wanted in order to maintain a good working relationship and to get paid, even if the products were of a low standard. The first of these is one of the reasons why we, as researchers, often do not learn from our mistakes, choosing instead to pretend the failed research never happened and strategically leaving it off CVs because it ‘doesn’t really count’. The second is worse, it reinforces the legitimacy of types of research that are unethical, that provide inaccurate information, and that serve (primarily) the organisations that fund the research, rather than the communities that the research is being conducted on. This is something I am not willing to do. I would prefer to learn from my failures.

[1]There are a number of issues with the term ‘hard-to-reach’, not least its origin in social marketing which claims all people can be reached by marketing if the right approach is adopted (Kalathil, 2013, p. 122), but it academic research it is now generally used to describe any group that is ‘innaccesible to most traditional and conventional methods’ (Whitnell, 2004, p. 8)

Fraenza, C. B. (2014). Anxiety and the Imposter Phenomenon Among Graduate Students in Online Versus Traditional Programs (Doctoral dissertation, WALDEN UNIVERSITY).

Morrison, L. (2014). Why do people drop out of PhD programmes? Retrieved from the website  http://www.gradschools.com/article-detail/phd-drop-out-rates-2242