Marriage and “A Fair Shot”

I found the following quote from one of Obama’s speeches on his campaign website:

“We are greater together than we are on our own. I believe that this country succeeds when everyone gets a fair shot, when everyone does their fair share, and when everyone plays by the same rules.”

After reading this quote, I wondered if the discourse of “a fair shot” is a useful way to put forth a political agenda.  On one hand, this is a standard political line designed to offend no one.  After all, virtually no one is against a fair shot.  Voters can also read this as support for whatever definition of fairness they adhere to and apply it to any topic they desire.  On the other hand, the malleability of such statements leaves the public without much concrete information about a politician’s positions or their values.  Beyond vagueness, however, I find the framework often reduces our understanding of opportunity to possibility rather than likelihood.

I realize Obama’s speech refers to economic opportunity, but here I am going to interrogate “a fair shot” using the “cultural” issue of marriage.  Voters will decide ballot questions on same-sex marriage in several States this election year.  Both sides can argue their positions while adhering to the “fair shot” rhetoric.  For example, a same-sex marriage proponent could view Obama’s statement as support for everyone, regardless of sexual orientation, to have the right to marry whomever they might wish to marry.  Of course, those opposed to same-sex marriage would object.  Those opponents have long argued that a fair shot at marriage already exists – as long as you define marriage as a union between one man and one woman.  Opponents of same-sex marriage point out that there is no law preventing consenting adults from choosing such an arrangement.

Pundits classify the heated debates surrounding these contests as part of a “culture war.”  Yet, both sides value marriage as a positive goal for two people.  In addition, both sides focus on the possibility of marriage rather than the likelihood.  Obviously, the likelihood that a gay couple will marry is irrelevant in a State where it is illegal.  However, when we agree, across a “culture war” that marriage is a positive outcome, we should also ask why some social groups have different likelihoods of marrying.  For homosexuals the answer is obvious.  Homosexuals are less likely to marry because most States don’t recognize their preferred relationships.  But, how do we explain the disparities by social class? 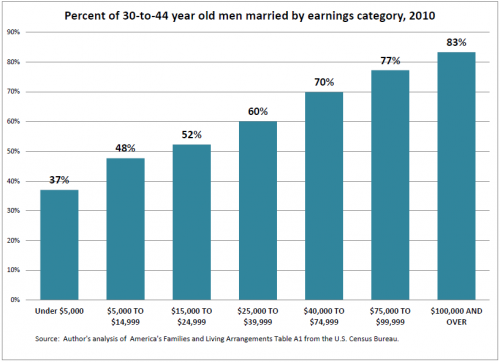 Unlike marriage disparity between homosexuals and heterosexuals most Americans believe that the disparities by social class constitute a social problem.  The federal government has intervened to promote marriage among the poor through welfare reform initiatives.  While politicians promote marriage and government programs now encourage marriage, Randles (2012) points out that the poor are less likely to feel that they are ready for marriage as the “economic bar to marriage” rises.  Low-income couples increasingly cite a lack of financial stability “as one of the main reasons they delay or avoid marriage” (Randles 2012).  While members of every social class have the same opportunities to marry, the varying degrees of financial stability lead to a marriage gap.  Many view that marriage gap rather than the financial disparities that underlie it as the primary social problem.

From a right-wing think tank

After all, at the most superficial level, everyone has, regardless of social class, a “fair shot” at marriage.  The failure to take this shot implies, for many, that the unwed have not done their “fair share” in working toward a committed relationship and perhaps they want to play by a different set of rules.  Conservatives have consistently cited such an attitude as a key factor contributing to poverty.  However, as Radling (2012) points out, “Instead of thinking that marriage can prevent poverty, as marriage promotion policies advocate, the sociological research on why the poor marry less urges us to reverse this reasoning: poverty prevents marriage.”  When we view poverty as the cause and low marriage rates as the effect, poverty prevents a “fair shot.”

Randles (2012) does see some signs that the government has begun to “take a more comprehensive approach.”  However, I wonder how much traction such programs can get without deepening our understanding of fairness. 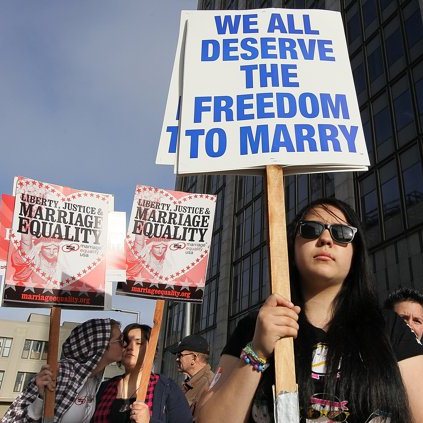 is freedom more than just a possibility?

The freedom to marry will likely further be extended to same-sex couples after 2012.  However, if we value marriage for our citizens (and I’ve never heard a politician say s/he does not) then we might want to broaden our concepts of freedom and fairness.  Is the existence of the possibility of a stable marriage (or the possibility of a living-wage job) how we should measure fairness?  And how much should freedom be dependent upon the likelihood that one will exercise a right?