Yes, Criticising Russell Brand for Supporting the New Era Estate is Snide, and if He is a Hypocrite, We All Are 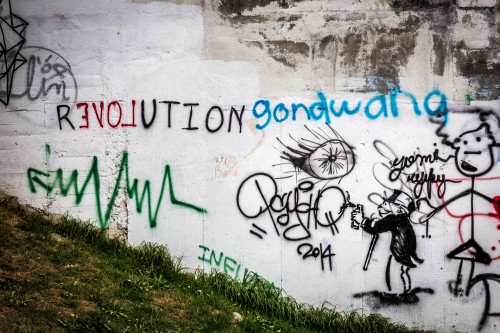 I found this Russell Brand inspired graffiti in my neighbourhood, which is a small Barrio of Quito, Ecuador, called Guápulo,

To ask a person how much their apartment is worth (as Channel 4 reporter, Paraic O’Brien, did to Russell Brand yesterday), or how much they pay in rent when they are attending a march in solidarity with less fortunate and more marginalized people is manipulative and dishonest, and, yes, it does make you a ‘snide’. It was an attempt to surreptitiously undermine the actions of Brand and paint him as a hypocrite simply because he happens to be richer than the people he is trying to help. This type of logic suggests that anyone who is rich either cannot or should not use their position of power to help people who have found themselves at the wrong end of a grossly inequitable social and economic system.

Today, the front page of The Sun, which carried the headline ‘Rants about high rents and tax avoidance, but pays £76k a year to tax-dodge landlords. HYPOCRITE’, is just ridiculous. Luckily, though, people have picked up on the logical fallacy, which has been followed by numerous satirical tweets under #TheSunLogic .

I have been confronted in similar ways regarding my own attempts to understand the various issues surrounding climate change and how this affects the people who are most at risk from its impact.  Usually, it starts with someone asking me why I am in South America, which is followed by me attempting (and usually failing) to summarise my research goals. This is often followed by a response along the lines of ‘Well, if you really cared about the environment you wouldn’t even be here, do you know how much carbon trans-Atlantic flights produce?’ (yes, I do, and here is a New York Times article about it).  Sometimes people seem to think that because I can afford a high quality  laptop or don’t live in a hovel that I can’t really care that much- the indication being that I should give all my money to poor people.

Unfortunately I don’t have as much money as Russell Brand, but comparisons can be drawn between the two criticisms. Brand summarised it well while being interviewed by Jeremy Paxman (who has also been criticised for not voting) last year when he pointed out that ‘When I was poor and I complained about inequality people said I was bitter, now I’m rich and I complain about inequality they say I’m a hypocrite. I’m beginning to think they just don’t want inequality on the agenda.’ What is implied when people question Brand’s right to ‘complain’ about social injustices is that you can only do so if you are a faultless person and/or are willing to give all that you have to people who have less. By this logic, almost everyone living in Europe is a hypocrite. We make up less than 10% of the global population, yet control over 25% of the world’s wealth.

The argument is absurd, not least because having privilege is precisely the reason some people’s voices are louder than others. It is because Russell Brand is rich and famous that he is able to force the otherwise deaf ears of the political elite to listen to (or at least acknowledge) people who are being forced out of their homes. As Lindsey Garrett from the New Era Estate (you can find out more about the campaign and sign the petition here), who leapt to Brand’s defence during the short interview outside 10 Downing Street, stated ‘at least Russell is prepared to help people, David Cameron isn’t. At least Russell Brand is standing up, regardless of how big is house is and is coming down here and helping ordinary people. Let’s see if David Cameron is prepared to do that’.

When the ‘intelligent’ critiques of Brand’s attempt to do something positive fall short (as they often do) criticisms tend to descend into personal attacks. It seems like every time he appears in public the media picks one thing he has said or done, takes it out of context and uses it to try to humiliate and discredit him, which simultaneously diverts attention from the real issues. When he criticized the role of voting in a ‘democracy’, suggesting that people not vote (this isn’t a new idea, and there are valid reasons to question the way in which voting legitimizes a system that is really not democratic at all), he was treated like a pariah (and called idiotic by John Lydon) and more recently he was attacked for appearing in an old photograph with Julien Leblanc, who happened to become a famous misogynist.

Paxman’s interview in 2013 started with the question ‘Who are you to edit a political magazine?’, the sentiment of which is the crux of the argument used by numerous people against Brand. These range from those that take a generally patronizing tone (such as this article by Hadley Freeman) to more extreme examples such as a Fox News ‘debate’, where presenter Sean Hannity described Brand as a ‘D list actor, better known for his failed marriage to Katy Perry’ and ‘dumb and ignorant’, while one of Hannity’s panel said ‘he looks like he cooks meth and sleeps in his car’.

Another recent post on the Independent’s website entitled ‘Official: Russell Brand Now Worse than Jeremy Clarkson’ showed a graph (Brand doesn’t have time for graphs, as he pointed out in his second News Night interview) that claimed Brand’s contribution to political debate is perceived by 46% percent of the British population as ‘negative’, while only 41% saw reason to be concerned by Jeremy Clarkson’s political opinions. The writer of the article (Dina Rickman) also deemed it important to point out that only 29% of the public think Russell Brand is funny. Though this might say more about the general public than it does about the man himself, I am not convinced it is a fair representation of either. #TheSunLogic shows that people see how illogical the criticisms really are, and if you go to any of the articles on major news sites that attempt to undermine or ridicule Brand, the comments appear to be overwhelmingly in defence of him, with many people commenting that he has inspired them to take an interest in politics. To my mind, this can only be a good thing.

Of course, I am not saying that Russell Brand is perfect and he, like everyone, should not go uncriticised (there are many interesting articles about his views on women and feminism, for example). But what is refreshing about him for me is that he seems to be aware of this too. In the Paxman interview he stated that ‘It’s easy to attack me, I’m a right twerp, I’m a junkie and a cheeky monkey, I accept it, but that doesn’t detract from the incontrovertible fact that we are living in a time of huge economic disparity and confronting ecological disaster.’ And this is why he is inclined to defer to the knowledge of others, such as guests on his Youtube show, The Trews, that include George Monbiot, Naomi Klein and Helena Norberg-Hodge, and instead he focuses on using his fortunate position to draw attention to some of the most important social and political issues that we face today.

To those who dislike Russell Brand’s public persona, I suppose that is just a matter of taste. But to people who work in the mainstream media and continue to go out of their way to try to remind Brand (and anyone who is inspired by him) that he is just some idiotic, uneducated celebrity, a plebby web that has no place in politics, your time could be much better spent. Why not instead criticise those wealthy celebrities and powerful politicians, or the business elite that lurk behind them, those who go through their lives ignoring the inequality and injustice that surrounds them? Why not ask yourself what you have done recently to use your position of power or privilege to do something positive?  As for Russell Brand, I would say keep doing what you are doing. If you are rubbing this many people up the wrong way by pointing out that there is something wrong with the current political system, you are all right by me.