Childcare and Work: The Privilege of Choice 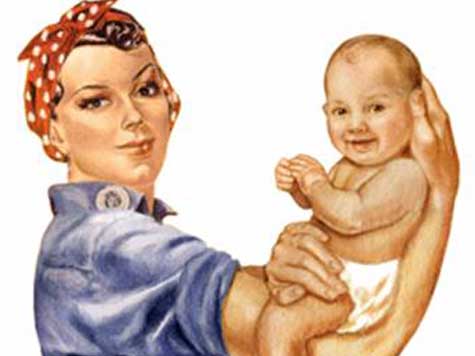 “If you don’t believe that childcare is work, then try telling your parents or whoever took care of you that raising you was not work.  I don’t imagine that would go over well.”  I say this in my social problems class as a counterpoint to the assertion that welfare-recipients are lazy and immoral.  Most recently the sentiment was employed to defend wealthy “stay-at-home mom,” and wife of presidential candidate, Ann Romney.  The sentiment that childcare is work is fairly uncontested when referring to the non-poor.  In class, I urge students to consider whether the sentiment is equally valid for their (likely) non-poor parents and for poor parents.  I make this statement in the context of welfare to point out that both the ability to stay at home and the status of “stay-at-home mom” are class privileges and not merely reflections of moral or ideological choices.  Indeed, even for women who have privilege the vernacular meaning of “choice” rarely applies.

After Mrs. Romney’s defense of stay-at-home moms, those on the left were quick to point out the Romney campaign’s inconsistent stance on childcare and work.  Mitt Romney had argued a few months earlier that mothers on welfare needed the dignity of work.  Combined with his wife’s statements, the Romney campaign gives voice to the popular, but often unstated, view that those with financial support from individual men have earned a form of dignity through their husbands and thereby earned the non-deviant designation of “stay-at-home mom.”  The status remains unavailable to single mothers who must contend with accusations of irresponsibility.

The rhetoric of personal responsibility and independence dominated much of the 1996 welfare reform overhaul.  The reform bill itself was titled, the “Personal Responsibility and Work Reconciliation Act.”  Despite talk of independence, Mink (2001) argued that welfare reform’s work requirements are alternatives to marriage not welfare – a dependency shift not independence.  She asserts that the work requirements and marriage initiatives cast work as a punishment for women’s independence from men.  While both spousal and state financial support are each forms of dependence or more accurately forms of interdependence, a valuable contribution, in the form of childcare, is, however, only recognized for married women.

Ann Romney did not cite her dependence, or everyone’s dependence on others, but instead defended her “choice” to be a stay-at-home mom.  In doing so, she presented staying home as akin to a consumer choice and guided by personal preference, morality, and/or ideology.  In response, editorials pointed out that the choice to stay home with children is not one that most mothers (or fathers) can make.  Mrs. Romney had, therefore, decontextualized her choice.

Even for those for whom the option is available, the word “choice” is too simple.  As Stone (2007) notes the rhetoric of choice regarding so-called “opting-out” among white college-educated professionals masks the social context of such choices.  For example, the women in Stone’s study noted “supportive” husbands who recognized that staying home or working was a women’s choice and were prepared to accept their decision.  However, Stone points out that saying “it’s your choice” is also another way of saying “it’s your problem.”

Due to cultural norms regarding work and mothering as well as the structural constraints of inflexible work environments such choices are not as free as they seem.  Even a woman as privileged as Ann Romney are caught in the double-bind between work as a source of dignity and the ethic of intensive mothering.

However, I can’t muster much sympathy for Mrs. Romney.  Not because of her level of wealth, but because her political statements deny the role of social factors in shaping motherhood.  Such a stance is troubling from a presidential campaign that does not support changing the workplace to accommodate breast-feeding or leaves of absence without penalties, or equal pay protections and enforcement or seems willing to consider a caregiver income.

That last one means paying women (or men) to take care of their own children.  To be fair, I haven’t seen any Democrat support such a policy either.  However, a caregiver income is not as radical as it sounds.  Our society already subsidizes out-of-home childcare (through direct subsidies and tax write-offs), a 1,000-dollar per child tax credit, a higher tax deduction for dependents, public schools etc.  We could raise taxes, on people like the Romneys (and Obamas), and expand resources for childcare.  At the very least, both campaigns should avoid propping up the phony “mommy wars” and acknowledge the social and economic factors surrounding childcare in contemporary America.  After all, Obama and Romney are competing for votes on the basis that they can change some of those social and economic factors.