Cracking Down in Schools: Criminalizing Discipline

In January of 2010, the New York Civil Liberties Union, along with the national ACLU and law firm Dorsey & Whitney, filed a class action lawsuit against the City of New York, for NYPD School Safety division practices of seizing and arresting middle and high school children. In particular, the NYPD officers allegedly arrested students for minor, non-criminal activities, handcuffed students and locked them in seclusion rooms without teacher or parental consent, and took students to hospitals for psychiatric evaluations, again without teacher or parental consent.

The ongoing case epitomizes a phenomenon that has proliferated in the last two decades, according to professors Paul Hirschfield and Katarzyna Celinska in their January 2011 review in Sociology Compass: the criminalization of school discipline. In the late 1970s, there were reportedly fewer than 100 police officers in schools; by 2007, almost 70 percent of schools had security guards and/or police officers (Dinkes et al. 2009), despite the fact that rates of school violence have been declining since the early 1990s (see, for example, graphs here). There is no consensus among scholars about what, exactly, constitutes the criminalization of discipline in schools; studies examine the use of “zero tolerance” policies, school police or resource officers, metal detectors, drug sweeps and surveillance cameras. 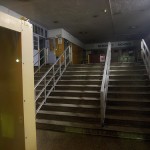 Hirschfield and Celinska focus in particular on evidence regarding the social distribution of such practices, the causes underlying such a transformation in disciplining students at school, and the effects of the transformation. (Throughout, they note that the empirical evidence regarding the criminalization of discipline is far behind theoretical formulations of the issue.) There is mixed evidence regarding which types of schools are more likely to use criminalized discipline. Urban, suburban and rural schools all use police and surveillance cameras, and suburban school police are more likely to be armed, and to conduct lockdowns and drug sweeps. One qualitative study of four schools found that arrests were standard only at the most privileged of the schools. Regardless of the percentage of non-white students across the four schools, black students within those schools were more likely to be suspected and monitored, in part because they did not have powerful parents to protect them.

Other evidence, however, suggests that urban schools with large non-white populations have greater rates of criminalized disciplinary practices. For example, urban schools constitute only 15 percent of middle and high schools nationwide, but comprise 75 percent of schools that carry out daily metal detector scans of students. Another study found that the percentage of black students in a school was the only predictor of the use of “extreme disciplinary measures” (Welch and Payne 2010). In a parallel finding, Torres and Stefkovich (2009) observe that schools with small minority student populations have lower rates of criminalization of discipline.

The authors point to two theoretical traditions to explain the origins of such practices in schools: a social fear account—that criminalization of schools is a social and political response to fears about school crime, and a social and political structure account—that changing macro-structural features have contributed to the growth of such practices. This latter account argues that industrial decline and its associated population movement to the suburbs left certain areas with concentrated poverty and greater youth violence. At the same time, the explosion of mass incarceration (see Bruce Western’s Punishment and Inequality in America– a selection of which is here— or Michelle Alexander’s The New Jim Crow) changed the political calculus around the distribution of resources. Hirschfield (2008) argues that it was advantageous for legislators to funnel money into the penal industry, mostly located in rural areas, which left urban schools with fewer resources. This left less money for non-criminalized types of behavioral control, including more teachers and better facilities. Hirschfield (2008) also notes that the growth of the criminal justice profession around mass incarceration promoted school criminalization, as these professionals peddled their wares—both advice and technology—to schools.

While the empirical evidence regarding the effect of criminalization on school climate is rather sparse, there are plenty of reasons to think that these practices weaken community at a school by placing authority in the hands of police who often do not understand nor care about students’ problems, eroding student trust. One study finds that schools with criminalized disciplinary measures have lower attendance rates than similar schools without those measures (Brady et al. 2007). Students often see zero tolerance policies as unfair, as they fail to provide due process or they are unevenly enforced, which may highlight social divisions within a school. Zero tolerance policies may have the effect of teaching students that they have few rights, and they have little recourse if those rights are violated. On the other hand, a number of studies find that student often welcome more policing, as some students are so disruptive that they significantly impede learning.

Paradoxically, the trend of state anti-bullying legislation may not help the situation. Many of these laws include extremely punitive measures against both students who harass other students (heavy on the use of suspensions and expulsions) and against schools who fail to adequately curb bullying (the New Jersey law is an especially punitive one). There are exceptions; the New York anti-bullying law, the Dignity for All Students Act, attempts to limit the amount of police involvement in punishment, and acknowledges the importance of emotional and psychological help for both the subjects of harassment and the perpetrators. (And, as more and more studies are pointing out, the line between these two is often not clear; an example.) The lawsuit and this legislation is part of the ACLU’s program challenging what they call the “School-to-Prison Pipeline.” The criminalization of discipline may not only participate in this pipeline, but it may obscure the boundaries between these two institutions.

“Beyond Fear: Sociological Perspectives on the Criminalization of School Discipline”