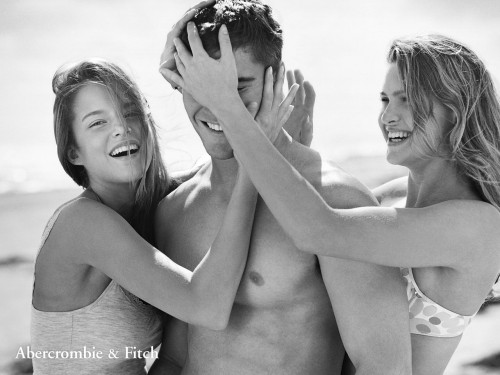 The CEO of Abercrombie and Fitch, Mike Jeffries, is up-front about his marketing and sales strategy: appeal to “cool” and “popular” kids to make the brand distinctive and desirable. While anybody can wear other brands, only those who fit an ideal body type can have the privilege of sporting Abercrombie and Fitch tees and jeans. How does Jeffries achieve this goal? The Abercrombie and Fitch advertisements use models who are “all American” (white and skinny), the stores employ similarly small and fit workers, and the largest size available for women is a size 10. Jeffries does have all of his bases covered: no one will mistake Abercrombie and Fitch as a brand that markets to the masses.

Not surprisingly, Jeffries has been widely criticized for these tactics. In an era of increasing eating disorders among people of all ages, and bullying of children and teenagers who do not fit the norm, such a marketing strategy has potentially serious consequences. By presenting a skinny and white body type as the ideal “cool” and “popular” person, Abercrombie and Fitch perpetuates a body image that is unrealistic for many men and women. While this brand is certainly not the only one to expound these ideals of beauty, it is probably fair to say, at least, that Abercrombie and Fitch capitalizes on the problem.

Much of the criticism targets the tactics aimed at women. The female models are too skinny and, because of the exclusionary sizing techniques, a woman of average weight from the U.S. could not fit into the clothes. These critiques follow a long tradition of feminist and academic works that expose the social constructions of beauty for women and their problematic effects. In this sociology lens post, though, I want to focus on the body image standards set for men and the potential consequences.

is the ideal “cool” and “popular” man represented by Abercrombie and Fitch? A quick google image search of Abercrombie and Fitch ads show that he is white, lean, and muscular. Ironically, he wears no shirt, not even one with the Abercrombie and Fitch logo. He is popular with women, displaying his heterosexual prowess. In other words, the brand relies on racialized and sexualized images of masculinity to market their products.

While much of the body image literature historically focuses on women, scholars now recognize that men are also held to unrealistic body standards. Diagnoses of eating disorders are becoming more prevalent in the male population. Men turn to exercise dependence to achieve a muscular body type. In other words, research shows that men, too, feel bad about their bodies, in part because of media representations of the ideal man.

Companies like Abercrombie and Fitch rely on the insecurities that result from racist, sexist, and heterosexist cultural images of beauty. Ideally, companies will stop invoking these standards and let their products speak for themselves without employing exclusionary tactics. Until then, let’s avoid Abercrombie and Fitch.