‘Two in five trans [1] people (41 per cent) and three in ten non-binary people (31 per cent) have experienced a hate crime or incident because of their gender identity in the last 12 months.’ (Stonewall Trans Report 2018). If you add to this the levels of criticism and “debate” present on social media ranging from Piers Morgan [2] to Paula Radcliff [3] about the trans community it makes for a pretty dire situation. I contend that a way to improve this situation is to tackle the criticism with informed, reasoned and affirmative research involving the trans community.

The consultation on the Gender Recognition Act (GRA) was a focus of some of the current conversations surrounding transgender identities. The GRA is the statue that outlines the process that trans people who wish to legally change their gender (as it appears on their birth certificate) have to go through. The Government recently consulted on this process and asked for comments on some potential changes to this process, the most significant being a possible shift towards self-determination. This means that trans people would not have to be diagnosed with the medical condition gender dysphoria before applying for a Gender Recognition Certificate. Some people who identify as feminists saw this as a potential threat to cis women’s rights. Some of the other foci for criticism have been, the treatment of trans children, trans people in prisons, trans people in sport for example Caster Semenya and the judgement on her testosterone levels.[4]

Here are five reasons why doing trans research at this point in time is so important:

My interest in trans research began in May 2016 at a talk on ‘Gender in the 21st Century’ as part of the Writing on the Wall Festival. On the panel for this discussion were authors Juno Dawson, Abigale Tarttelin and drag queen The Vivienne. After this panel I wondered what would happen if a trans student wanted to play university rugby.  I spoke to the student union who said they would refer to the British Colleges and University Sports (BUCS) regulations who said they would refer to the Rugby Football Union’s regulations, which at the time consisted of a scant half a page of A4. It struck me that there was no way this could address the intricacies of different trans identities or the different levels and formats of rugby. Thus, my undergraduate dissertation was born, looking into the barriers to trans participation in sport. In this thesis writing, I made some suggestions about ways in which governing bodies and universities could make their sports more accessible to trans or gender-non-conforming people.

My research interest then continued into my masters; my dissertation looked at the level of recognition given to trans relationships by different EU counties. I thought and still think the idea that a couple’s marriage could transform simply by getting on a plane was just bizarre. In this research, I sent questionnaires to the equivalent of the Minister of Justice in all EU member states to establish the level of recognition their state affords to trans people. The surprising outcome of this research was that recognition appeared for many states to hinge on whether the couple were perceived to be heterosexual. Therefore, it appeared that sexual orientation was more of a defining factor than gender identity or gender history. This research also formed the basis of the award-winning poster I presented at the Socio-Legal Scholars Association Conference in April 2019. 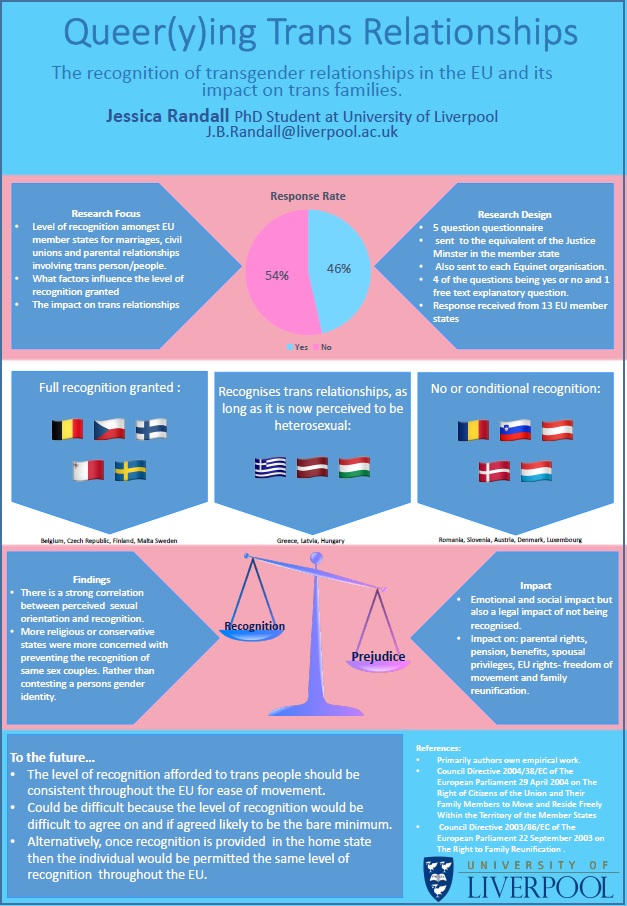 I am now 7 months into my PhD looking into the impact s.2(c) of the Gender Recognition Act 2004 (the clause that requires trans people to remain in their acquired gender until death) has on trans relationships and non-binary people. I want to explore this element of the legislation to see if this one clause was deterring or preventing people from being legally recognised in their correct gender. It also seemed odd to me that if the state can cope with citizens changing other elements of our identity such as name or marital status regularly, then why not legal gender? Professor Nicola Barker and Professor Marie Fox are supervising this research in the Law school at the University of Liverpool.

[1] Throughout this article trans is defined in its widest sense in that it included any gender identities outside of the binary cis gender identities. I.e. anyone that does not identity, some or all of the time, with the gender they were assigned at birth. This includes non-binary people, gender fluid and queer people.

[2] There are many examples of Piers Morgan’s transphobia, but here are a few examples: https://www.attitude.co.uk/article/piers-morgan-slammed-for-transphobic-comments-on-good-morning-britain/19187/  and https://www.independent.ie/entertainment/television/tv-news/watch-piers-morgan-asks-nonbinary-trans-couple-if-he-can-identify-as-a-black-woman-says-their-gender-is-a-fad-35725774.html accessed on 16th May 2019

Jessica Randall is a PhD candidate in the School of Law and Social Justice, University of Liverpool, UK.