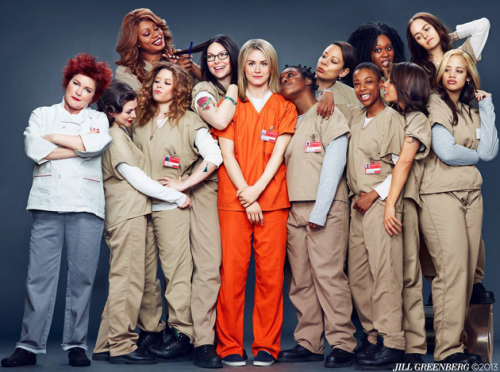 **Spoiler alert: This post includes plot points from throughout the first season of “Orange Is the New Black.”

On July 11th, Netflix released its newest original video-streaming series, Orange Is the New Black. Based on Piper Kerman’s memoir chronicling the 13 months of a 15 month sentence she severed at a minimum security prison in Danbury, Connecticut for money laundering and drug trafficking, Orange has had the highest first week ratings of any Netflix original series.

The overarching plotline is focused on Piper’s character, a stereotypical upper-middle-class white woman adjusting to the conditions of prison life.  However, each episode also focuses on the lives of one of the diverse women living within the prison walls along with her, highlighting numerous sociological issues including race, class, gender, sexuality, power structures, mental health, and the structure of civic systems.

As more newspapers, magazine and bloggers began commenting on the series, I started to notice a pattern among reviews.  Critics regularly commented on the “graphic nature” of the series.  My initial response to this pattern was to question the ways in which we continue to hold women to a different set of standards with regard to themes of the body, sexual desire, promiscuity and violence than men in similar positions.  I figured I would investigate what graphic situations were so problematic that they warranted these “warning labels.”

Throughout my search several reviews struck an uneasy chord with me. In a Washington Post review Hank Stuever describes Kate Mulgrew’s character, Red, as “a Russian inmate who runs the kitchen and serves Piper a used-tampon sandwich out of initial spite.” This is immediately followed by the statement, “Warning: The show is full of gross and intentionally unsettling moments; it is prison, after all.  With any luck, the sandwich will be the worst of it.”

Piper does not eat the “egg mctampon.”  She just stares at it while the other inmates snicker in the background.  However, something about this three second shot is shocking to critics.  An article in the July 3rd, 2013 edition of the Wall Street Journal provides a fairly detailed description of the breakfast sandwich followed by the words “don’t ask.”  Ironically, in a later episode correctional officer Mendez, played by Pablo Schreiber, urinates in a large vat of gravy, which is tasted by one of the inmates.  I found no commentary on that scene.

Another review by Emily Nussbaum in the July 8th and 15th, 2013 issue of the New Yorker, stated, “One sequence even slyly builds up the audience’s appetite for savagery, then upends it with something graphically sexual, in a sequence that is sure to gross viewers out.” The gross out scene is a facial close up of Big Boo, a butch lesbian played by Lea DeLaria, bringing herself to orgasm followed by a shot of a stolen screwdriver.  Nussbaum makes no reference to a scene in an earlier episode that also climaxed with the implication of masturbation.  However, that sequence focuses on male prison administrator Joe Caputo and his first interaction with Piper.

Netflix series are not restricted by the same ratings and viewer binds that impact the content and creative license of mainstream television shows; there is freedom to be a bit edgier, push boundaries, and instigate discussions on important but slightly taboo social issues. And writers of Orange do push viewers to the edge.  However, as I read review after review I was left wondering if reviewers were minimizing complicated and deep rooted gendered issues the writers of Orange are bringing to the forefront.  Upon further reflection, I began to realize these critiques are actually extremely useful as they highlight how cultural norms perpetuate in our society.  In other words, Orange Is the New Black can be seen as a unique tool for challenging viewers to (re)evaluate beliefs about race, class, and social institutions as well as gender, sexual orientation, and the presentation of human sexuality.  But the reviews are also critical as they point out exactly what those cultural beliefs are.

Stubbs, Margaret L. and Costos, Daryl. (2008). “Negative Attitudes Toward Menstruation: Implications for Disconnection Within Girls and Between Women.” Women & Therapy 27(3-4).