I See the Target: Social Media and the Accountability of Military Technology 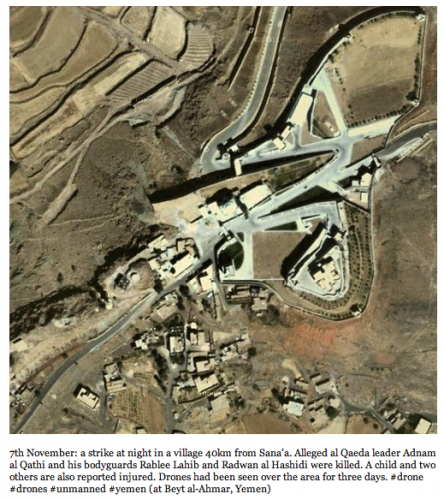 An image from Bridle’s Dronestagram

In a recent article, Brad Allenby and Carolyn Mattick argue that the ‘rule book’ of international warfare needs to be rewritten to include of the use of new technologies, in particular drones.[1] Drones sit in an ambiguous legal space because they are unmanned aerial vehicles that are often used to fly in a restricted airspace. Compounding this problem is that the use of drones is largely undocumented as a matter of national secrecy. Nevertheless another layer of technology, social media, is now providing a battleground for visual accountability. On the one hand, I want to draw attention to the use of Instagram to highlight the use of social media to inform – and critique – the use of drones through layered representations of their targets. On the other, and competing with this critique, we must look at the use of drone target visuals released by governments to communicate the drones precision and safety. These examples are a way of demonstrating how social media produces a visual politics that can be used to highlight the use of these new military technologies. This contestation for visual accountability may be the social inroads to in fact see the target. The target I am alluding to here is not what the drones see but the frameworks that that legitimatize the actions of these drones.

Image making has held a close relationship to the communication of the experience of war and violence. Susan Sontag wrote about the her experience of viewing pictures of concentration camps:

Nothing I have seen – in photographs or in real life – ever cut me as sharply, deeply, instantaneously. Indeed it seems plausible to me to divide my life into two parts, before I saw those photographs (I was twelve) and after, though it was several years before I understood fully what they were about.[2]

Here we have a powerful touchstone for how images can have a deep impact on the perception of events. It can make a conflict real in a way that is otherwise unimaginable. The images of war act as evidence and provide a context with which to critique and contest the actions of those participating in the war. Thus the presentation and transfer of these images (to whom and for what reason) become a critical place to examine not only the content of these images but the acts of war that they present.

In an account developed in October of 2012 called Dronestagram, journalist and artist James Bridle used Instagram to show the places that drone attacks had been carried out. In creating the images, Bridle gathered an interfacing collection of social information from The Bureau of Investigative Journalism and then used Google Maps Satellite to locate the exact places of the drone attacks. What seems to be the most effective aspect of Dronestagram is that the images from Google Maps Satellite give a birds eye view of the locations, as if taken from the drone itself. The captions (authored by Bridle) include information that further cements the nature of the images such as the number of people who died as well as the name of the location and the date of the attack.

According to Bridle, “these technologies,” as the interfacing set of digital media, “are not just for ‘organising’ information, they are also for revealing it, for telling us something new about the world around us, rendering it more clearly.”[3] Through Instagram and the images on Bridle’s account, we can see how social media and photographs can be used to highlight an aspect of political warfare that is largely unseen. Here the gaps both in physical distance from the attacks (which are largely in Pakistan and Yemen) and knowledge of the use of drones, are bridged through the visual and act as a critique of the use of these new technologies of warfare. Thus building a visual framework of evidence for understanding the use of drones in conditions of war.

At the other end of the visual accountability spectrum we have the use by governments to legitimize the use of drones. A recent example of this being the video of an Israeli drone hitting a car with one of the leaders of Hamas, Ahmed al-Jabari, inside. Revealingly these images were uploaded to YouTube by the Israeli Defense Force on the 14th of November, 2012.[4] As articulated by Gabriella Blum in an article by Wired, the video is aimed to deliver three messages:

A warning to militants in Gaza (we can get you anywhere, anytime); an appeasing message to the Israeli public (we will not remain helpless in the face of repeated rocket attacks), and a reassuring message to those concerned about the use of targeted killings, especially for its potential collateral damage (we can do this with utmost precision).[5]

Here, the images of war are taken to social media like never before (the use of drones by the U.S. is largely undocumented). The uploading of the drone video by the Israeli Defense Force acts as evidence to build the argument for the use of drones: their accuracy and precision. Therefore, assisting in building the framework that legitimizes the use of drones where there is no international law; it is the people’s court of social media.

For the social media generation, these visual contestations become the witnesses to the acts of war. Essentially the images uploaded by Bridle and the Israeli Defense Force are the same images (both aerial shots of locations of drone attacks). However, one was released by a government as in a supportive context, the other by an individual as a critique of the use of drones. These images have an effect on the perception of the events and the use of these new technologies. Where there is no law, there is the power of the visual battleground of images to build the framework of understanding and critique. The target is in sight, and with the knowledge of these visual frameworks through social media, we can understand the complexities surrounding the use of new technologies in warfare.

[1] Why We Need New “Rules of War”, http://www.slate.com/articles/technology/future_tense/2012/11/drones_cyberconflict_and_other_military_technologies_require_we_rewrite.html, Accessed: 11/15/2012

Other articles of interest:

The Tweets of War, http://www.newyorker.com/online/blogs/newsdesk/2012/11/the-tweets-of-war-israel-and-hamas-take-to-twitter.html?mbid=social_retweet