How About "Just Don't Rape?": On the Invention of Date Rape Nail Polish, Preventive Advice, and Women's Subordination (or Men's Empowerment) 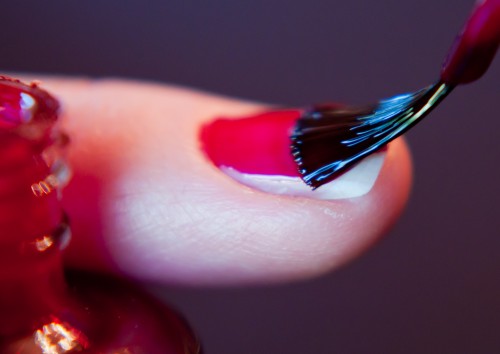 It is the same old tale, just spun with a different color thread: “Women: don’t get raped.”

Recently, four students (note that they are all male) invented Undercover Colors, a nail polish for women that changes color (like a mood ring) when it touches rape drugs commonly slipped into drinks. Now,  I do applaud the men for recognizing the all-too-common issue of rape and taking the initiative to do something about it. Only, what they did still places the blame on women.

First, for those who are unfamiliar, here is how the nail polish works: the female who is preparing to go out for the evening coats their nails with Undercover Colors. Then, when she is offered a drink, or returns to her drink that she has placed down, she discretely stirs her drink with her finger. If the nail polish changes color, then it has been drugged and she should (1) not drink the drink and (2) probably leave. According to the creators’ website:

“Through this nail polish and similar technologies, we hope to make potential perpetrators afraid to spike a woman’s drink because there’s now a risk that they can get caught. In effect, we want to shift the fear from the victims to the perpetrators. We are Undercover Colors and we are the first fashion company empowering women to prevent sexual assault.”

Let’s unpack that a bit. Yes, this invention has progressed old rape “prevention” advice quite a bit, recognizing that women (single or not) should be able to go out, drink, and enjoy themselves. This also recognizes that women are in control of their sexuality and can say no. Additionally, it tries to shift rape narratives from women to men, saying that men should think about their actions prior to slipping drugs into a woman’s drink.

But what does this also say? It also says that women should be feminine and wear nail polish. Fact! Not all women wear nail polish. I think specifically about non-feminine women, religious women, or women in occupations that strictly prohibits nail polish. This continues dichotomous gender role assumptions that only feminine women can be raped. Women who act like men, who are aggressive, who wear pants, or who date other women (or trans or gender non-conforming people) cannot be raped. Men, trans, and gender non-conforming individuals also are raped, though not at the same and alarming rates as women. Finally, while supposedly shifting responsibility towards men, the creators do not do anything about stopping rape, in fact it presumes that men will always rape. By making a product (that remains the responsibility of the target) that men must constantly fear about a person wearing, the perpetrator in this case is still planning on raping.

This goes along the lines of other preventive date-rape advice that I have received and heard over and over again: park near a street light and remember where you park, walk with your keys in your hand, take self-defense, “protect yourself” and be aware of your surroundings, don’t go anywhere alone ever (like that is feasible), avoid drinking, date people whose background is similar to yours (seriously, that is one!), carry Mad Money and mace. That isn’t to say that these are all bad pieces of advice, but they are all constructed so that the female does not get raped. Not so that the male doesn’t rape.

In a wonderful editorial about this issue, feminist blogger Jessica Valenti reminds us of other failed attempts to “help” women like the chastity belt, anti-rape underwear, and Rapex (a female condom that would hook the penis). All of these place the responsibility to protect themselves on women, just another thing to deal with on a daily basis. As Valenti states, “The problem is that simply being female in public remains an undue risk.” If these preventive steps aren’t taken, then it becomes the woman’s fault. Not the rapist’s. In an attempt to give women empowerment, we actually still are subordinating women to a patriarchal world where men are entitled access to women whenever, wherever, and however they’d like.

So, what should we do? How about teach our kids not to rape? Teach our boys (but really all individuals, because anyone can rape) that consent is mandatory. That sex can be pleasurable when all parties agree. How about taking the responsibility and blame and turning in on its head, and blaming the actual perpetrator? Because I sure don’t want to have to spend my money so I’m not raped.

If We Gave Men the Same Advice We Gave Women