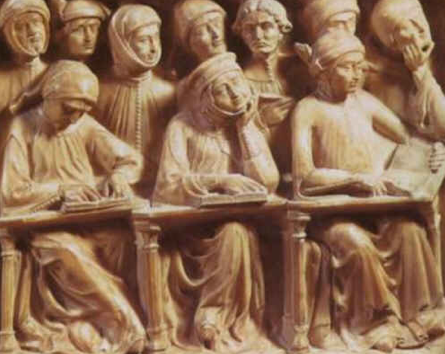 “When the entry of the answer occurs before the subject is completed, overlapping with it” Oxford Dictionary of Music.

Avery Gordon  introduces a unique musical device that is characteristic of fugal compositions in her discussion of the Mothers of the Plaza de Mayo.  One of the accomplishments of the Mothers was their ability to give voice to the silenced by interrupting the dominating discourse of the state. During the 1970s, the state systematically massacred thousands of young men and women while simultaneously denying the acts as both a means of covering their actions and as a mechanism for placing the population into a state of fear induced normalization.  These acts created a dialogue where the state would vocalize denial and citizens would respond with a façade of acceptance, although silently knowing the truth.  The Mothers of the Plaza de Mayo cut off the denying vocalizations of the state.  The Mothers protested peacefully around the main square of Buenos Aires with photographs of their missing children pinned to their hearts.  In fugal composition, a stretto is a way of magnifying tensions and increasing excitement.  In April of 1977, the mother’s stretto was a means of finding their disappeared children and demanding an end of military authority and economic repression.  In both cases the expected dialogue between voices is interrupted, the character of entry is changed and the composition takes on a new direction.

For  Gordon, haunting is method and at the same time, her work takes a fugal approach in both structure and content. The silences examined in Ghostly Matters serve as a mechanism to introduce the main thematic elements of her study but also serve as a voice in their silence.  By giving complex personhood to those whose voices have been silenced in the past, Gordon creates rich contrapuntal relationships between the voices of the social world and the ghosts that vocalize that which is not being said as a mechanism for creating a more just society.  Gordon structures these dialogues in a fugal form.  She creates complex subjects where multiple voices respond in imitation and contrast.  They can speak in entirety or can be cut off by each other creating numerous melodies and strettos.  Gordon’s attempt to find a new method for the production and consumption of knowledge creates a fugal space where she alternates between history, sociology and literature.  She ultimately determines that the interdisciplinary approach is the only means available to understanding the complex relationships between subjects and objects; facts and fictions; presence and absence; and  knowing and not knowing.

“Little tail… In a fugue an episodical passage between the appearances of the subject(s)” Oxford Dictionary of Music.

I’m writing a paper on how cultures flow.  The purpose of this paper is to position my proposal within the context of globalization and I’m somewhat confined to a sociological perspective.   However, I’ve been thinking about themes that are rarities within this academic discipline that I worked so diligently to enter. I want explore Tani Barlow’s concept future anteriority as it relates to the movement of objects across time and space.  I want to stress the need for unpacking history a genealogical manner as outlined by Michel Foucault prior to discussing how African American jazz became embedded within Parisian society in the 1920s.  I want to look apply Annemarie Mol’s concept of encroachment as it pertains to the globalizing of objects.  I’m gently told these are not issues for a graduate student.  They are things that need to be tucked away until I am a tenured professor.  I’m told this from more than one mentor and I believe they have my very best interest at heart.  I’m told this out of kindness, not because I’m incapable of making a complex theoretical argument.  So I agree.  I stick to how globalization has impacts cultural flows.  I don’t delve into future anteriority or genealogy or encroachment.  I outline world polity theory and instances of hybridity.  I should be disappointed but I’m not.  I’m afraid.  I’m not sure I’ll remember that I want to explore all these complex overlapping issues later.  I’m not sure I’ll remember that I want to open the gates when I stand in front of them guarding my disciplinary boundaries from overly excited graduate students with foggy ideas that may or may not ever come into focus.

“Thinking involves not only the flow of thoughts, but their arrest as well.  Where thinking suddenly stops in a configuration pregnant with tensions, it gives that configuration a shock, by which it crystallizes into a monad.  A historical materialist approaches a historical subject only where he encounters it as a monad.  In this structure he recognizes the sign of a Messianic cessation of happening, or put differently, a revolutionary change in the fight for the oppressed past.  He takes cognizance of it in order to blast a specific era out of the homogeneous course of history-blasting a specific life out of the era or a specific work out of the lifework” (Benjamin 1968, 263).

The works of scholars such as Djebar, Mol, Gordon and Benjamin all highlight the benefits of taking an interdisciplinary approach to the construction and comprehension of knowledge.  In mixing history with creative writing and memory, Assia Djebar opens the reader’s mind to the complexity of the past and the ways in which it is embedded within the present and future. Annemarie Mol illustrates the ways in which a more fluid and diverse body of literature is necessary to capture the complexities of the experiences of the patients, doctors and technicians at Hospital Z.  Avery Gordon moves beyond fluidity to give birth to a mechanism that is completely new and belongs to no discipline.

Any critical and curious graduate student would easily see the benefits of taking an interdisciplinary approach by examining the works of these three writers.  Within the academy today interdisciplinary projects often greeted with hostility, or at best skepticism, especially when graduate students produce them.  Since the university serves as the locus of training for scholars of the future, it is understandable and appropriate that graduate students be disciplined in their respective fields.  A scholar of sociology should be familiar with the work of Durkheim and Weber in the same way that a scholar of music needs to have a core understanding of Bach and Brahms.  However, the solid boundaries surrounding disciplines within the academy do create monads of knowledge limited in their perspectives and fiercely protected by those in power.

Even established scholars such as Djebar, Mol and Gordon face consequences for their visionary works.  It is not likely that Djebar’s Fantasia would be part of a historical course examining the 19th century French-Algerian conflicts.  Mol’s The Body Multiple is not required reading for vascular specialists.  Students in the humanities more often read Gordon’s Ghostly Matters than students of sociology, her own discipline.

Clearly, the gatekeepers of academia make taking an interdisciplinary approach difficult for both graduate students and established scholars.  This is one of the reasons why fugue as method could be beneficial to graduate students.  A fugue begins with an exposition that introduces the voices of the piece.  For the graduate student, the exposition is a critical moment where the key elements of the discipline can be articulated in complementary contrast to voices from other areas.  It is a place to establish the work as being clearly “sociological” or “historical” or “anthropological.”  This is the essential moment when the student grounds her work within the disciplined tonic.  It is also a place to introduce various voices from outside the discipline.  During the exposition, voices only speak in the harmonic relations of fifths, fourths,  thirds, or unison.  There is no tension, no augmented or diminished chords.  Voice relate in harmonic contrast through amicable points and counterpoints.

The exposition can be followed by an episode that serves as a connective tissue between the introduction and the first entry.  This is another place where connections across disciplines can be made; the student can begin to bring in a quotes from literature in a historical article or an anthropological references in a biological study.  In musical compositions, one of the functions of the episode is to provide a space for the modulation to related keys.  This is the place for gentle movement.  It is the place where the student can begin leaning into interdisciplinary scholarship without ever removing the work from its tonic core.

The entries that follow provide an opening for the student to explore the subjects proposed in the exposition.  In addition to subject, the student could highlight an alternative voice as a counter-subject that serves as underlying secondary theme throughout the work.  In the musical form, it is common for various voices to respond, or answer the calls of the subject and counter-subject producing rich layers of points and counterpoints.

Of course, there will be moments when the student finds some of the most convincing means of exploring their data comes from outside of their discipline.  This is a moment where she can apply the stretto.  In musical compositions, this often occurs in later entries.  There is an overlapping of the subject.  Voices no longer wait for the previous voice to finish.  In the fugue as method approach, it can be the moment when voices from outside the discipline move from the periphery into the focal point.  What makes this device useful is the eventual return to a tonic center.  The tension is released and the writer returns to her core discipline.  One of the most common means of bringing a musical fugue to an end is by using a device called a pedal, where the various voices sound over the sustained tonic.  In this way the listener (or reader) is reminded of the complexity of the voices as they relate to the primary key. For in the end a sociological study is not about biology or literature, and it must be rooted within the tradition of sociology.