Unist’ot’en action camp: the importance of autonomy in resistance 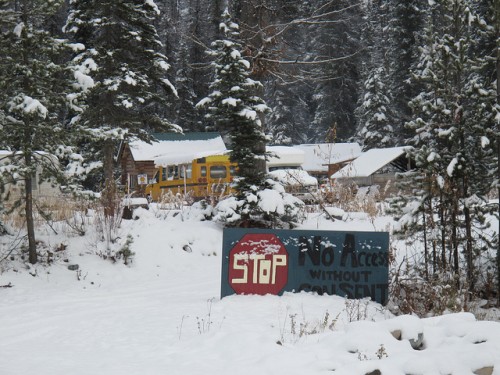 As the Midwest and Northeastern United States thaw out from our early January “Polar Vortex,” I can’t help but wish governments and corporations would make self-improvement resolutions like so many people do during this time of year. Corporations are, after all, afforded the rights of “personhood,” so why not? What would their lists include? In my dream scenario these bodies would resolve to abolish themselves but, assuming this won’t happen any time soon, I significantly lower the bar. Perhaps something like, “This year, I resolve to stop exacerbating climate change. I will try really hard to protect the earth and respect the people who live on it.” Sadly, such self-initiatives are also unlikely. Fortunately, collective action has a history of forcing governments and corporations to halt their rampant destruction.

Right now, a particularly inspiring example is occurring in British Columbia, as indigenous groups resist the resource extraction and building of pipelines on their land. In July 2010, a group of Wet’suwet’en people seized drilling equipment, built a roadblock, and set up the Unist’ot’en action camp directly in the proposed path of pipelines that would carry gas extracted through hydraulic fracturing. This process, known as “fracking,” involves pumping millions of gallons of water, sand, and toxic chemicals into shale with extreme force to release methane gas. Fracking poses health risks as the process has been known to poison drinking water and pollute the air, as the carcinogenic dust released in fracking fields can cause respiratory diseases. Studies have also documented negative social impacts, known as the “Boomtown Effect,” in cities targeted by the fracking industry that include “increases in crime, drug and alcohol abuse, sexually-transmitted infections and domestic violence.” If all this isn’t bad enough, the building of these pipelines on indigenous unceded territory means the Canadian government is actively involved in treaty violations. This conflict, in particular, underscores the spirit underlying the struggle: that of autonomy.

Over the past three and a half years, Unist’ot’en camp community members have had success in halting pipeline development, confronting drillers and demanding that they leave. They refuse to compromise with the Canadian government and claim complete control over the land. Their goal is to become self-sustaining one day. In a press release, they now speak of the blockade differently, imbuing it with deeper meaning and revealing the radical desires beneath their aims: it is “a gateway into understanding truth and meaningful decolonization.”

Struggles such as this do more than merely resist social injustice and environmental destruction. Jerome E. Roos (2013), in his essay “Autonomy: An Idea Whose Time Has Come?” highlights the importance of current movements that reject change-through-institutional-reform, recognizing that political structures don’t possess the power to reverse the neoliberal course. He explains that the creation of autonomous communities serve as a “lesson in democracy” for those involved, stimulating psychological shifts in what is possible, while developing alternative social, political, and economic forms “which may one day come to form the organizational bedrock of the autonomous society” (16).

The Unist’ot’en camp interferes with profit-driven environmental destruction while claiming and defending the space necessary to preserve ways of life – and practice new ways – that don’t operate from the same logic as capital and the state. Since 2011, we have been seeing a re-emergence of the focus on space occupation by social movements for such purposes. As this year unfolds, it will be interesting to see if the trend continues.

Fractured Land, a film in the making, that tells a story of resistance to the oil industry in northeastern British Columbia.