The Postmodern Politics of the Sanity Rally 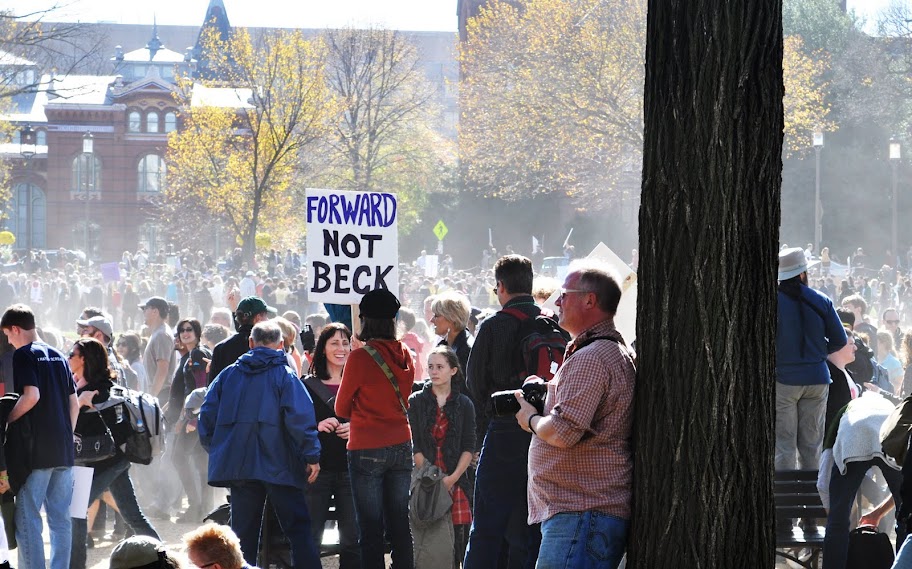 I’ve watched mass gatherings with great interest while living in Washington D.C. From Obama’s election night and inauguration to various marches, and, of course, Glenn Beck and Jon Stewart’s rallies to restore “honor” and “sanity,” respectively. These last two, both organized by cable television personalities, brought massive amounts of people to the National Mall, so many people that these rallies might be telling us something about our current moment in American political discourse and participation. Let me describe yesterday’s Rally to Restore Sanity and argue that the politics of irony on display are more than “mere spectacle,” but potentially quite powerful.

Left, White and Bigger than Beck
Like Beck’s rally, yesterday’s crowd was partisan and mostly white. It was far less diverse than Obama’s election night celebrations or his inauguration day, a point that deserves its own analysis. It was clear to anyone who attended both Beck and Stewart’s rallies that the latter brought the larger crowd. Current estimates have yesterday’s crowd at around 215,000 people (about 2.5 times Beck’s 87,000). And, of course, Stewart’s attendees were largely on the political left. 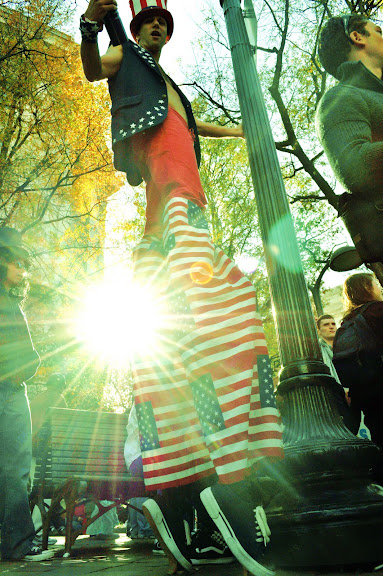 A Postmodern Event
If you have seen any images from the event [here are some photos I took], you know that it was intended to be humorous and entertaining. Yes, there was Stewart and Colbert on stage, their shtick was good as always, but more importantly there were the many hilarious signs and costumes created by the attendees. People watching gets no better than this. The rally was indeed a site for creativity and expression. There was a somewhat incoherent “pastiche” of images presented. If there was a central theme, perhaps it was “irony” -you know, in that weird way we use it to mean “sarcastic.” This event had all the hallmarks of a more postmodern space for possibilities of all kinds, be they intellectual, artistic, humorous, etc, than just a space for political rhetoric.

But is all of this irony and humor “mere spectacle” as my friend and blogger Les Andrist states? He tries to find the meaning of the event by looking to Stewart’s words, which will fall short of being powerful becuase political rhetoric is modern politics, and this is a postmodern event. I will argue that this event followed the logic of the spectacle in a potentially subversive way by inverting its own logic from within. Analyzing such an event means looking well past the words those on stage used. It might even require moving some of our attention away from the stage, that most modern of pulpits, and out towards the crowd.

The Power of Humor
We can start by reflecting on the use of humor in the crowd. Without making this point explicitly, the hyperbolic irrationality of the Sanity Rally serves to mock those who are radical and irrational without such irony (e.g., some of the most ridiculous Tea Partiers, Beck, Palin, O’Donnell, etc). In response to media fear mongering, this rally attempted to be silly; those attending had fun during the day and danced on through the night -you don’t think the rally really ended at 3pm, do you? 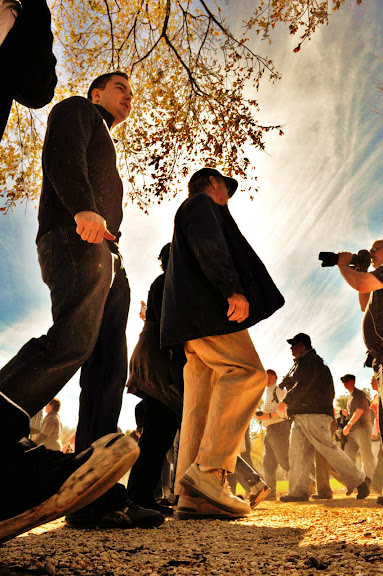 Guy DeBord and the situationists in France in the 1960’s saw the blurring of entertainment and politics as dangerous, and reacted in highly political ways: riots, strikes, debate, violence, etc. However, their rejection of the logic of entertainment-politics was ultimately unsuccessful. Perhaps the Sanity Rally is a different strategy against entertainment-politics. This new strategy accepts that the logic of our moment is spectacle, and attempts to critique the system using its own logic. Sure, it reifies the logic, but it might be the best we can do to reform a political discourse out of control. The Sanity Rally was silly because the people there felt that the rest of American political discourse is increasingly a joke -remember, Stewart may be the most trusted news anchor in America. This was a massive media event lead by a comedian, ridiculous attendees were taking lots of pictures, and most importantly, it was all funny. This group of people all gathered together and ran with the idea of politics-as-entertainment, which, in effect, calls attention to precisely this trend.

Thus, it would be a mistake to dismiss the postmodern politics of irony -the dance, the signs, the costumes, the jokes, the play, the free expression- as devoid of meaning. When politics become synonymous with entertainment we can expect people to use entertainment to fight back. The joke itself is a message, and it is not trivial.

Play is Political
Instead, we should recognize that humor is an incredibly powerful tool of persuasion. Tina Fey’s famous impersonation made the very idea of Palin’s campaign look hilarious, which was potentially more harmful than if one disagreed with her. I believe the Tea-Party’s greatest limitation is not that people disagree with them substantively, but that so many Americans think they are hilarious. To be disagreed with might be tough, but to be laughed at and not be a part of the joke is debilitating.

Thus, humor is a powerful political tool. The silliness of the Sanity Rally can have powerful, substantive, real, material political consequences. If it hinders the Tea-Party, it could impact who our elected officials are, what laws get enacted and so on. In a postmodern politics, play is political.

So, was The Rally to Restore Sanity a joke or a political rally? Both. Did it make a mockery of American politics on the hallowed National Mall before an important national election? Of course, and that is kind of the point. ~nathanjurgenson.com