In Guy Ritchie’s newest Sherlock Holmes movie, European political intrigue abounds as the 19th century wanes. Politically consequential bombings are regularly blamed on anarchists who seem intent on spreading terror and chaos, and anarchists are used as a cover for an attempt at an even more effective disruption of European politics. 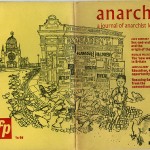 In my last post I reviewed some of these types of images of anarchism, and suggested that anarchism actually provides an interesting opportunity for analysis in terms of its history as a social movement, its trajectory as a political philosophy, and its alternative approach to social order. I use social order to mean the system that governs relations between people and their actions in groups, including how economic exchange takes place, how norms develop, and how conflicts are resolved. The elements of the system may be formal—for example, specific organizations or law— or informal—like patterns of interaction and expectation for interaction. For many anarchists (though again, there is enormous diversity in the philosophy and tactics behind protests labeled as anarchist), anarchism is not about the absence of social order, but about establishing social order that is not founded on coercion and hierarchy; anarchists’ opposition to an authoritative state derives from this principle. An alternative is a social order based on “customs, habits and usages” among all members.

Anarchist protesters have been a part of many of the major social movements in modern European history, from the 1848 French Revolution to the Russian Revolution to the Spanish Civil War. Organizations based on anarcho-syndicalism, which proposes an economic and social system democratically governed by workers, proved influential in Central and South America in the early 20th century. The history of anarchist thought, as distinguished from social movements based on anarchist principles and tactics, is also rich and varied. For example, some have argued that the ancient Chinese school of thought of Taoism is anarchist in nature, in that it argues that there should be no lords or subjects; others saw Greek philosopher Zeno’s work to be anarchist, as he argued that there was no need for states.

In The Sociology of Philosophies (a shorter version of the tome is here), which surveys the social conditions around many of the worlds’ great philosophical traditions, Randall Collins makes a number of points about the when and where schools of philosophy emerge, and the form in which philosophical thought takes. Far from being the product of brilliant, isolated, individual efforts, major philosophical works were clustered in the same time period, within a small number of physical spaces, and around social ties, often arranged as chains of teachers and students. Indeed, Collins argues, the social relations between schools of thought—how contentious or harmonious relations were—influenced the degree to which the philosophy produced was abstract or concrete. Schools of thought relied on the organizational structure—for example, the strength of patronage ties—supporting the people carrying out philosophical work. The history of anarchist thought might be read in light of Collins’ observations as well; a cursory review suggests a great degree of temporal and spatial clustering; from the emergence of Christian anarchism through Europe during the Middle Ages to Enlightenment versions of anarchism as proposed by William Godwin to French anarchist thinkers such as Pierre-Joseph Proudhon, Mikhail Bakunin, Peter Kropotkin, and others who were involved in the revolutions of 1848 and the Paris Commune. (Of course, actually examining whether the schools and strands of anarchist thought developed as Collins’ describes philosophies in general would require a much more in-depth knowledge of the history of anarchism than I have, but Collins’ provides an entry point for thinking about anarchist thought.)

A major criticism of anarchism is that it seems totally unserviceable in light of what we know about how humans create groups and maintain order. Rosabeth Moss Kanter describes one possible result that “Though communes may remove the repressive control of distant, impersonal institutions, they replace it with the control of the intimate, face-to-face group of peers, which is perhaps a more benign kind of coercion, but coercion nonetheless.” However, she argues, though some social order is required, these types of groups attempt to carry out creating and enforcing order in as equitable way as possible.

A number of researchers have pursued studies of social order within anarchists communities—how social order actually occurs. Randall Amster uses examples from utopian experiments, indigenous cultures, and the group, Rainbow Family of the Living Light, and finds evidence that anarchist communities punish members, but are more likely to do so using restorative or restitutive justice. The bottom line seems to be that doing anarchism right is very difficult, and requires a lot of effort and energy from all participants, but there are historical and current examples where it succeeded, including the community in Madagascar that David Graeber, who has been closely involved in the Occupy Wall Street protests, studied for his doctoral dissertation.

For more resources on the history of anarchist social movements and philosophical thought, see Anarchy Archives, which also includes a number of critiques of anarchism, and comparisons between anarchism with socialism.