A lot has changed since the U.S. government signed the IRCA Act of 1986, a policy that changed the face of immigration reform and affected many immigrants. In many ways, this policy coincides with my own personal history of immigration, subsequently influencing the research trajectory I have taken as a sociologist. Among other provisions, the IRCA Act of 1986 gave undocumented individuals who resided in the U.S. since 1982 the opportunity to become legalized. Due to the IRCA Act of 1986, my father was granted amnesty in the U.S. and my mother and I were able to join him soon after. Sociologists have long been interested in Latino Immigration to the United States and current research has largely focused on how migration impacts family dynamics (Dreby 2010). Last week, I attended the American Sociological Association (ASA) Conference in Denver, Colorado and listened to sociologists and other academics speak about the current nature of Latino Immigration to the United States. In this post, I hope to provide a short summary of the talks I attended on issues of Latino Sociology and the Sociology of Immigration. 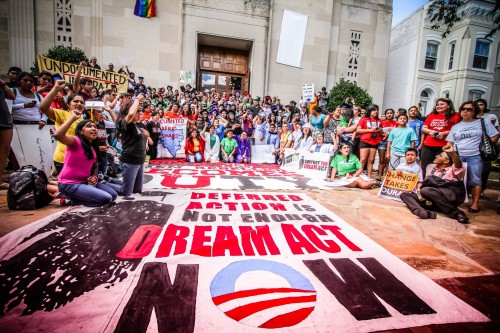 Source: “10 Things You May Know About Deffered Action.”

According to the existing research and news outlets, there is an abundance of “mixed status” families in the United States. However, a look back at the academic literature on immigration allows us to note that this mixture of families is not a recent phenomenon. Academics have long been writing about this blend of families. Almost a decade ago, a study using the 1998 Current Population Survey found that “one in ten U.S. families with children is a mixed status family” (Fix and Zimmerman 2001). Fix and Zimmerman describe a mixed status family as a “combination of legal immigrants, undocumented immigrants, and naturalized citizens.” At the conference, many of the presentations I attended talked about mixed status families, most often alluding to how this gave rise to many student mobilizations around the U.S. However, there were a few talks that revealed the complexity of mixed status families and how Latino families may be experiencing immigration differently. Among these talks was Nicole Lambert’s presentation titled, “Framing Strategies and Negotiations in Two Immigrant Rights Organization in Colorado.” Lambert, a sociology doctoral student at the University of Colorado-Boulder, presented a very poignant and not often emphasized point in immigration scholarship: there are  different opinions among children of immigrants in relation to the “Deferred Act.” One of these opinions is the further divide mixed status families will face due to the “Deferred Act.” Lambert’s research suggests that one of the issues with the “Deferred Act”  was that it would help individuals, rather than families. I thought this paper was unique and illustrated the different opinions youth organizations hold today with regards to immigration reform.

A large amount of literature on Latino immigration focuses on how immigrants are incorporated into American society, and how they fare economically. In recent years, sociologists and anthropologists have emphasized the “transnational nature” of immigration and the ways immigrants negotiate family (Smith 2006 and Boehm 2012). However, all of these studies focus on what happens to undocumented parents in the United States and their U.S. born children. While there are a lot of studies that focus on mixed status families in the United States, there are very few studies that focus on mixed status families in other parts of the world. Dulce Medina, a doctoral student at Arizona State University, presented her findings on mixed status families who reside in Mexico. Her paper, titled “Return Migration: Undocumented “American” Children in Mexico,” illustrates the complex nature of return migration and the ways that Mexican and U.S. policies parallel in dealing with foreign populations. Her findings suggests that U.S. born children have difficulty in obtaining legal residency in Mexico and matriculating in schools. I found Medina’s research very exciting and I think it provides sociologists working on similar issues with a more nuanced interpretation of mixed status families.

Overall, I was very impressed and excited by contemporary research on Latino immigrants in the United States. The “Deferred Act,” which passed through Congress last month, has already infiltrated academic scholarship and impacted the major themes sociologists are addressing in relation to immigration today.  In the future, I expect that a variety of sociological studies will be focusing on the ways mixed status families experience immigration reform like the “Deferred Act” and the complexity of those experiences. Moreover, as some of the presenters at this year’s ASA conferece noted, we need to understand immigration reform at the state and federal levels, underlying the array of interpretation among individuals in today’s society. For more information on immigration reform today, please see the following articles published in Sociology Lens; Local Level Immigration Control: A Necessity or a Justification for Discrimination?, Local Immigration Politics in the Rust Belt, and Immigration Bill Proposal: A Step Further from Equality.