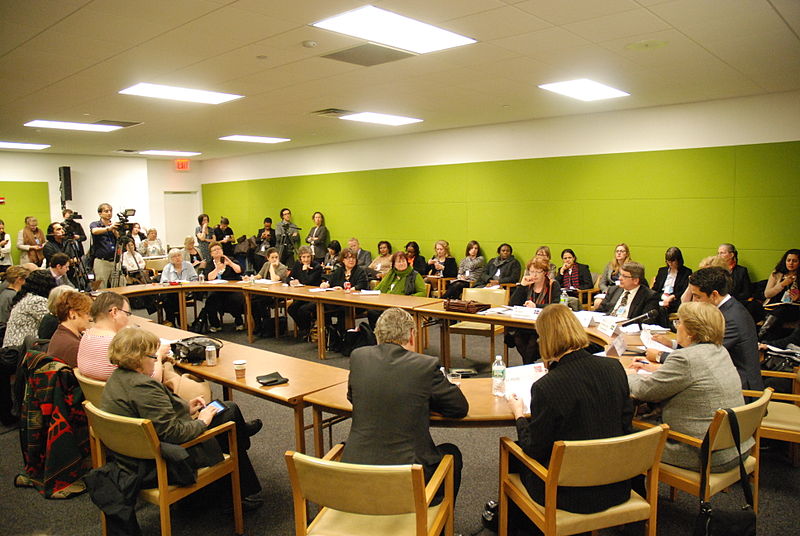 A side-event at the 2012 meeting of the United Nations Commission on the Status of Women. Attribution: Silje Bergum Kinsten/norden.org via Wikimedia Commons

The Huffington Post recently ran an article by Juliana Carlson, Assistant Professor of Social Welfare at the University of Kansas and member of the Mobilizing Men in Violence Prevention research collaboration, on the topic of men’s global engagement in the prevention of violence against women and girls.  She argues that “men and boys have been largely relegated to the sidelines of violence preventions efforts” but that a growing movement “aims to create structural change by engaging boys and men in conversations about equality, gender expectations, family health, fatherhood, and the concrete, positive roles they can and do play, such as sharing caregiving and being a role model for younger generations.”  The proliferation of NGOs doing this crucial work with men and boys extends well beyond the prevention of violence against women and may signal a larger shift in human rights and global development discourse.

Gender has been a part of human rights and development discourse since World War II but the ways in which it has been included in that discourse have evolved over time.  In 1946 the United Nations (UN) established the Commission on the Status of Women (CSW) with the simple purview of making recommendations to the larger UN agencies on women’s civil and political rights around the globe.  But, over time, that purview has evolved to include advocacy for women’s rights and health.  In 2000 the UN produced a series of eight “Millennium Development Goals” (MDGs) and MDG 3 specifically stated a need to “promote gender equality and empower women.”  Since 2000 the MDGs have guided the global human rights and development agenda.  Huge development agencies like the United States Agency for International Development (USAID) and the Swedish International Development Agency (SIDA) have turned to the MDGs for guidance in their giving of international aid and support for NGOs around the world.  Thanks, in large part, to the MDGs, women’s rights and status have been a major international concern in the 21st century.

However, the ways in which gender equality and women’s empowerment are achieved have undergone a number of shifts.  In the 1970s, the conversation took place in what has been called a “Women and Development” framework.  According to Eva Rathgeber, this framework emphasizes “the relationship between women and development processes” and assumes that inequality is a “problem that can be solved by carefully designed intervention strategies that than by more fundamental shifts in the social relations of gender.”  This framework excludes consideration of the ways in which men’s attitudes and behaviors reinforce and maintain inequality.  In the WAD paradigm, work with men and boys was generally not even considered as a potential solution to persisting inequalities.

In the 1980s another framework, “Gender and Development” (GAD), emerged to address the apparent oversights of WAD.  In this new framework, the feminist notion that gender is relational and social is taken more seriously.  If gender is constructed in through our social and relational interactions with one another than work solely with women quickly becomes insufficient to address inequality.  Under this framework efforts to engage men and boys to address gender equalities has become quite popular.  A number of large NGOs that work almost exclusively with men and boys were founded in the late 1980s and early 1990s and have grown exponentially since then.

Many scholars still consider the global development discourse to be taking place within the GAD framework, but some evidence suggests that the pendulum may be swinging beyond GAD to a “Men and Development” paradigm.  In the last decade work with men and boys has seemed to explode onto the global development scene.  The 2004 meeting of the UN’s CSW listed “the role of men and boys in achieving gender equality” as one of its two thematic issues and every meeting of the CSW since then has hosted NGO sessions focusing on men and boys.  In 2006 the World Bank released a book, edited by Ian Bannon and Maria Correia, which addresses men and boys as the neglected “other half of gender.”  Indeed, in 2013 an article in the Journal of International Affairs proclaimed that work to engage men and boys may be a “new transformative development agenda.”

While I certainly advocate for increased attention to be paid to the ways in which men’s attitudes and behaviors contribute to the persistence of inequality, I am not convinced that a MAD framework is desirable.  As increased attention has been paid to men and boys, NGOs that have traditionally served the needs of women and girls have rightfully expressed concerns about the security of their existing funding streams and political spaces.  Is funding for this work with men and boys coming at the expense of programs for women and girls?  Is CSW, a political space developed to ensure a voice in the UN for women, the appropriate space for this work with men and boys to take root?  These concerns, and many others, are a part of the current global development discourse.  But, one thing at least seems to be clear, working with men and boys is a necessary component of efforts for gender justice.

Hendra, J., FitzGerald, I., & Seymour, D. (2013). Towards a new transformative development agenda: the role of men and boys in achieving gender equality. Journal of International Affairs, 67(1).