How do refugee organizations communicate about forcibly displaced people? 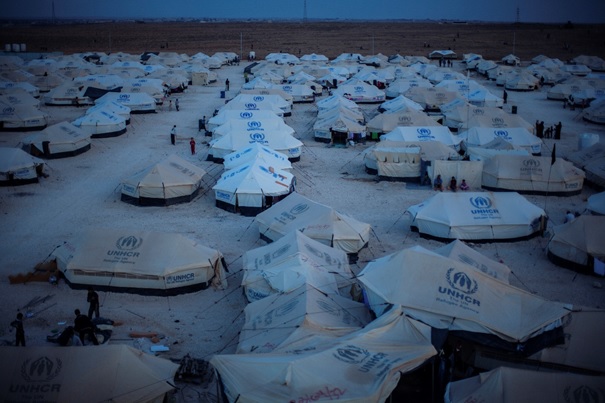 70.8 million. That is the enormous number of people who were forcibly displaced worldwide at the end of 2018. Many of them are confronted with hostility, xenophobia and/or increasingly popular far-right movements.[1] While states have the basic legal responsibility to protect and assist these displaced people,[2] in recent decades, several states worldwide have implemented increasingly restrictive asylum policies.[3] In protecting refugees’ rights and well-being in such a hostile environment, refugee organizations play a vital role[4] and public communication has consequently become essential for refugee organizations’ operations.[5]

Firstly, within press releases – and this is an important nuance explained below – forcibly displaced people are mainly represented as a homogeneous, passive and suffering mass. More concretely, they are represented as collectives (e.g. “Syrian refugees”, “refugees”,…) rather than as individuals. Similarly, the focus is more prominently on what they do – their temporary act of fleeing – than on who they are. Although the former is of course very relevant, their human characteristics and traits are largely ignored in this way.

The study also indicates that they are often quantified and treated as statistics or sometimes even just represented as a phenomenon (e.g. “refugee outflows”, “arrivals”, and “influx”), which has a very dehumanising effect. Furthermore, they are hardly represented – in contrast to the high-ranking employee, the occasional celebrity or other humanitarian actors – as (positive) doers, thinkers or speakers with agency, but mainly as passive beneficiaries depending on international aid and charity.

These representations can be explained by the specific features and the overall format of press releases and their goal to attract media attention. Specifically, there is often not much space to individualize forcibly displaced people in press releases and news media are mainly interested in facts and figures. Likewise, in other media genres (i.e. photos, videos,…) forcibly displaced people tend to be represented in a more positive manner.

How are citizens involved?

Further, the organizations try to obtain public and financial support by responding to the need for self-expression and -cultivation of the general public. Therefore, they use a market-oriented discourse that manifests itself on three levels. First, in self-directed testimonials from celebrities such as the following by UNHCR Special Envoy Angelina Jolie:  “Meeting these children was a heart-rending experience.’” Here, Jolie moves the attention from forcibly displaced people to her own experiences, in order to involve her fan audiences into the theme. Second, celebrities also directly address and thus engage citizens, as well as state leaders, by statements such as “[Jolie]: ‘I ask you to imagine your children going through the horrors in Syria.’” Thirdly, in the context of wide-scale humanitarian campaigns, the focus of the message is directed to the individual audience member and how the latter can be part of the solution.

Forcibly displaced people are in such cases only represented as secondary figures, kept in the margins of the story and subordinated to the “Western Self”. This can be considered as the result of the marketization of the wider humanitarian sector that is partially a response to the increasing competition within the humanitarian sector for limited media, public and political attention and funding.

How do refugee organizations attempt to persuade states?

Finally, refugee organizations try to link refugee protection to weightier state interests, such as migration, security, economics and humanitarianism, in order to persuade states to engage in refugee protection. For example: “‘Imagine the crushing social and economic consequences of this crisis on Lebanon and other countries in the region’ […] ‘They need much stronger international support than they have received so far […].” Refugee organizations opt for this pragmatic argumentation strategy because the aforementioned state interests often strongly determine states’ refugee policies. As such, however, forcibly displaced people are again portrayed as needy beneficiaries and resettlement objects.

In sum, we found that refugee organizations to some extent dehumanize forcibly displaced people and subordinate them to the ‘Western Self’ and national state interests. One can definitely argue that public communication essentially serves (the needs of) displaced people and that informing news media in a numerical (and thus homogenising) way fits the media logic. Although well-intentioned, the use of the aforementioned strategies does not only have ethical implications, but could have broader consequences. Media representations can influence perceptions, attitudes, and behaviours, both at the micro (beliefs about and interactions with displaced people) and macro (refugee legislation and policies) level. Consequently, these strategies could be rendered ineffective in the long term, as they reinforce displaced people’s perceived ambivalence in public discourse.

Therefore, we present various concrete suggestions for more moral, practical communication strategies. First, applying an adjusted human-centred language (such as ‘people’, ‘on the run/move’, ‘fleeing’, or ‘who have fled’) appears important to partially overcome the dehumanising effect of generic terms. Instead of the commonly used term ‘refugee’, which refers to a legal status, we suggest the use of the, in our view, more correct, practical and humane term of ‘forcibly displaced people’. Furthermore, offering (diverse) displaced people a significant, uncensored voice, creating stories with a human angle, providing broader background information, and assisting news media in creating such stories, could increase mutual understanding and knowledge in the long run. Similarly, new media and storytelling genres, hypertextuality, and other digital opportunities could enhance (online and face-to-face) interaction. More generally, training, informing, and debating constructively with various social actors (e.g. civil society, citizens, companies, educational institutions, governments, news media,…) on the importance of humane representations of (displaced) people could support these goals.

It is neither realistic nor socially desirable to think that more ‘humane’ approaches can replace ‘facts-and-figures’ approaches, which have important informational functions. However, both narratives could potentially reinforce one another when, to some extent, combined: facts and figures could be humanised, whereas human interest stories could acquire more relevance.

Stijn Joye is an Associate Professor at the Department of Communication Sciences (Ghent University). His areas of research include international news reporting with a focus on the representation of suffering alongside an interest in issues of domestication, colonial heritage and the practice of artistic imitation in film.