Reality television and the valorization of "rowdy, raunchy women" 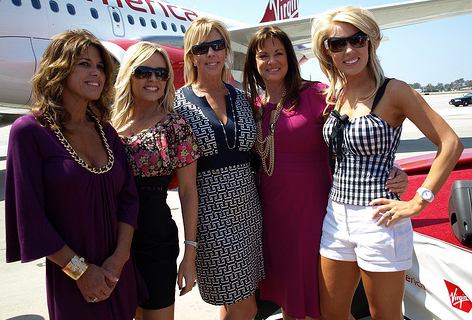 In a recent LA Times diatribe, writer David Kronke instantly reveals his disgust for women within the current slew of reality programming. He writes, “It has become a ubiquitous formula: Round up a gaggle of pert and perky girls who haven’t spent much time considering the world around them and who don’t play well with others, and follow their antics with camera crews. Invariably, they’ll say tings that betray a hilariously stunted worldview. Invariably, they’ll offend anyone with a modicum of decorum.” Kronke’s article critiques shows such as The Girls Next Door, Real Housewives, Bad Girls Club and Bridezillas, highlighting the fact that the majority of these “rowdy, raunchy women” are looking for attention, confrontation, and fame. Using interviews from professors and psychiatrists, Kronke adamantly works to illustrate the notion that the women of reality shows are located within a formulaic, desperate genre and that their attention-seeking behavior is beyond problematic. While Kronke’s concern for the direction and phenomenon of reality television is well taken, it seemed as though something was missing.

Hortense, a writer for Jezebel (a website with a feminist slant to pop culture criticism), immediately picked up on what was missing from Kronke’s analysis. In her response, she writes, “It’s a frustrating piece in that Kronke attacks the “rowdy, raunchy” women of reality television without stopping to also address the behaviors of their male counterparts …” Her piece continues with a critique of his failure to address the larger cultural influences on this female behavior, including the “wedding-industrial-complex” and the continued sexist treatment of women. She writes, “And yet he seems to think that that’s a pattern women fell into on their own: surely the upstanding gentlemen of reality television (and the societal forces that brought them to the mainstream), the murders, the washed up rock stars, the misogynists, and the ‘tools’ who need their own academy to learn how to be decent human being can’t possibly be blamed for the devolution of what we take as ‘reality’ on screen. Men getting away with atrocious behavior while women are condemned for dong the same?” In the end, Hortense successfully opens up the discussion to include men, not just women, when considering questionable behavior in reality programming.

However, while both writers include a critique on the otherwise vapid and destructive condition and construction of women (and men) in reality programming, the question of the audience appears to be an afterthought. Why are audiences so interested in women fighting one another? Why are programs where women discuss their lives as strippers and controlling brides generating such successful ratings? What exactly are the female-dominated viewers of the Oxygen channel getting out of Bad Girls Club? After reading Kronke’s article, the book Backlash: The Undeclared War Against American Women by Susan Faludi immediately came to mind. In this work, Faludi illustrates how media work to create a backlash against women whenever advancements in the workplace, rights, etc. are becoming publicly evident. For example, as women, in large numbers, began leaving the domestic sphere to work in the late twentieth century, studies and articles were published highlighting the notion that women were ruining their families and marriages, as well as becoming more and more unhappy with their new “freedoms” and “responsibilities” generated from the women’s movement.

Are these depictions of women, as well as the large audiences that follow them, an indication that we’re in the middle of a backlash against women? Are these images working to keep women “hysterical” and “emotionally inept” within a culture that has emasculated the male population due to a failing economy? The question remains: what about the audience? Yes, Kronke is correct to point out that the majority of female behavior on reality programming is problematic and yes, Hortense is correct when adding that men are responsible as well. However, this on-air behavior would not be reproducing unless audiences were responding positively to such programming. When did watching emotional, reactionary women become entertainment? How is watching women fight and verbally abuse one another gratifying? It is important to remember that “the media audience” is not a monolithic group. However, due to the success of this controversial content, it is becoming evident that it needs to be understood why audiences, at this historical moment, are drawn to this questionable behavior, in addition to why the actors or producers are participating in its reproduction.

Teaching & Learning Guide for: Toward a Sociology of Reality Television