Each year as part of its annual conference, the Socio-Legal Studies Association (SLSA) runs a postgraduate academic poster competition. In April of this year I was pleased to learn that my poster ‘Developing a Coercive Control Defence’ had been shortlisted. Since then, as well as being delighted that my poster was so well received by the competition judges, I’ve also found myself thinking about the value of participating in such a well-attended event where academic posters are viewed as an integral means of disseminating emerging legal research to a non-expert audience. These types of dissemination activities are particularly important to me now that I have entered the mid-point of my doctoral studies, cognisant as I am of the importance of engaging in activities that will help me to forge a successful future research career in academia.

The focus of my doctoral research at the Open University Law School is the development of a criminal defence in England and Wales for defendants who have committed crime against an innocent third party as a result of being coercively controlled by a domestically abusive intimate partner. This is a niche area that can sometimes prove difficult to explain to a non-expert audience and this is where the use of academic posters as part of my research dissemination activities has proved invaluable.

Even in the absence of an in-depth knowledge of the concept of coercive control as developed by Professor Evan Stark, or an understanding of the recent legal developments made in England and Wales related to coercive control, conference delegates were able to relate with my research because my poster was visually engaging with just enough text to get visitors hooked into a broader discussion of the issues raised. My poster also acted as a prompt for discussions in which I could explain the interplay between research in fields such as sociology, psychology, law, philosophy and neuroscience, and demonstrate how research in these areas can be drawn together to help to address the problems created within the current criminal defence regime for coercively controlled defendants who offend against third parties.

Through my discussions with delegates I was also able to stress the need for change in this area by sharing findings from research done by the Prison Reform Trust in which they conclude that being a victim of domestic violence (including that characterised as coercive control) is a driver into female offending, and that the majority of incarcerated female offenders (57%) have a history as a victim of domestic violence – facts that were often shocking and thought-provoking for delegates. 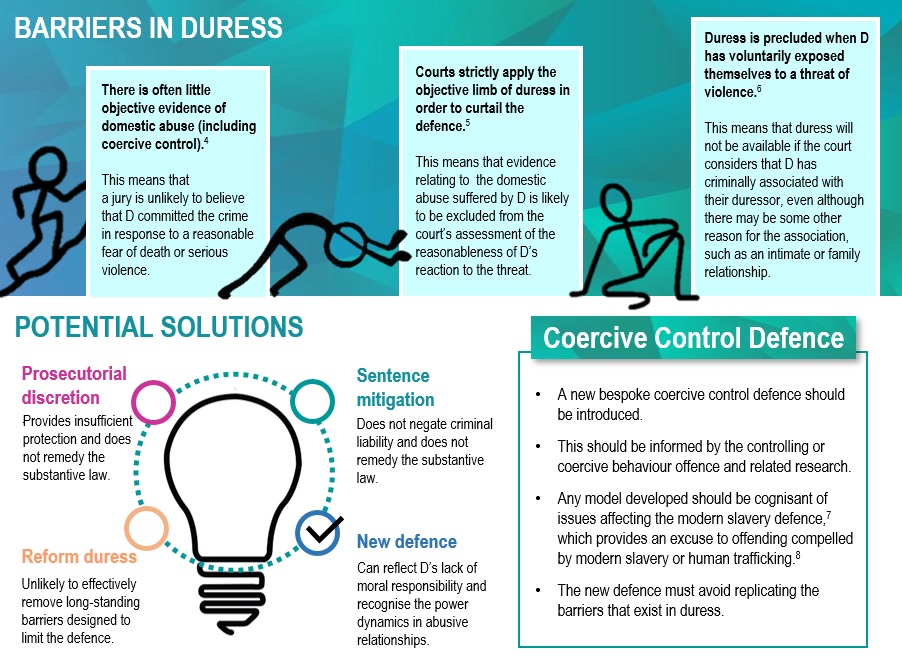 With my poster as a backdrop I was also able to explain my vision for a coercive control defence and advocate for desperately needed legal reform in this area. Currently the only defence available for defendants who have committed crime against a third party because they have been forced to do so by a coercively controlling domestic abuser is duress, a common law defence (i.e. defined in cases rather than legislation) which is antiquated and ill-equipped to accommodate the complex power dynamics involved in coercively controlling relationships.

Calling for reform of duress is unlikely to adequately protect this vulnerable group of defendants because the courts have traditionally been unwilling to recognise the impact of subjective characteristics of the defendant (such as a history of domestic abuse) on their ability to withstand the compulsion that they faced. Instead, the optimal accommodation that I advocate for these defendants would be the introduction of a bespoke statutory defence which would be capable of recognising the reduced levels of agency they enjoy when forced to commit crime by a coercively controlling domestic abuser. Such a proposal would also go further than current calls for coercive control to be recognised as a factor to be considered within existing defences, like we have seen in the Sally Challen appeal in relation to the partial defences to murder. Instead my proposal would be to learn from the problems evident in the application of the duress defence and the modern slavery defence (a statutory duress-type defence introduced in 2015 to provide an excuse to offending compelled by modern slavery), and from there to develop a defence informed by the coercive control research which would provide andefence to criminal offending where this had been compelled by coercively controlling domestic abuse.

So, whether you are a doctoral researcher or further along in your research career I would encourage you to see the value in academic posters. If you’re a researcher who wants to present at a conference, network, and disseminate your research ideas, consider doing so through an academic poster presentation (some useful tips on developing and presenting posters are available here). If you’re a delegate at a conference where there is an academic poster presentation section, then go along to find out more – you never know what you might learn, who you might meet, and where those engaging research discussions might take you! 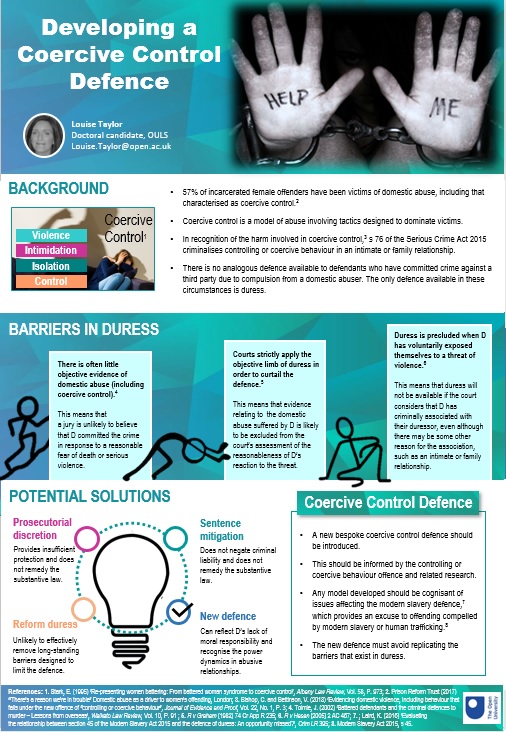