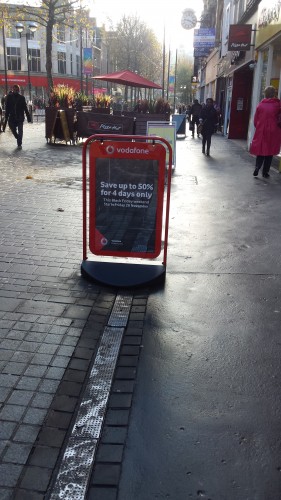 Perhaps it is because I was not in the UK for much of last year, but Black Friday came as something of a shock. Stepping out of my flat on yesterday’s bright November morning, I came across the above signboard, positioned on Croydon’s High Street by inveterate tax avoiders Vodafone. My initial reaction was one of sincere befuddlement – not because I hadn’t heard the term Black Friday before, for I had. Except, the Black Friday I thought I knew was March 12th 1993, the day on which Mumbai experienced for the first time a type of public catastrophe that is now termed a ‘serial bombing’ or ‘multiple coordinated attack’, beginning at the (then Bombay) Stock Exchange. As Vyjayanthi Rao observes, despite there being no memorial as such to Mumbai’s Black Friday, it certainly has a legacy. It was the first time that an urban attack was experienced as a catastrophe, almost a natural disaster.

Like Black Tuesday on Wall Street in 1929, or Black Wednesday in 1992 (when George Soros made some of that money he likes to give away by short-selling the pound), Black Friday unambiguously references a fixed and specific point in time. ‘Black’ days seem to function as calendric versions of what historian Pierre Nora called lieux des memoires – fixed sites to which social memory becomes tethered, and which compensate for the ‘acceleration of history’ that causes a rupture between ‘real memory’ and professional history. (The latter being ‘how our hopelessly forgetful modern societies, propelled by change, organize the past.’) You expect, even, that once a day is designated Black, it is sort of taken out of commission. There can only be one Black Friday, surely?

Well, it turns out there was an earlier Black Friday, in 1910, when Suffragettes marching upon Parliament were assaulted – two were killed – by the Metropolitan Police. (Perhaps that Black Friday has been overwritten in British social memory because of the difficulties involved in reconciling national admiration for both Suffragette leaders, and the then Home Secretary who presided over the brutalities, Winston Churchill.) Still, I was puzzled that Vodafone’s Black Friday seemed to be something that you get excited about (and that even offers you discounts). It fell to the Economist to educate me – and I learnt that the Black in today’s Black Friday could refer to it being the weekend on which American retailers get themselves back ‘in the black’ and out of the red (or, alternatively, it could be because of the shoppers who have died in the rush to grab a post-Thanksgiving bargain). Having started to take off on our side of the pond last year, promoted by Wal-Mart’s Asda among others, it seems this year that Black Friday has unapologetically inserted itself into our seasonal calendar. Rather than something we memorialise, it is promising to be something we do every year on the weekend after Thanksgiving (a festival of collective consumption that we have yet to adopt).

Soon after taking in Vodafone’s signboard, I found myself bombarded by emails offering Black Friday discounts – from stationery suppliers, my anti-virus provider and – bizarrely – the University of Salford. I even received offers to take advantage of a ‘Not Black Friday Weekend Offer’ by Welsh clothing retailer Howies (I confess I can’t tell the difference between theirs and an actual Black Friday Weekend Offer). And while I was previously oblivious regarding this Black Friday, I had heard of Buy Nothing Day, which since 1997 has fallen on this traditional day of consumer excess in the US (and on the following Saturday here in the UK). Buy Nothing Day in the UK is promoted as a day that ‘challenges consumer culture by asking us to switch off from shopping for a day.’ Participate and ‘You’ll feel detoxed from shopping and realise how much it uses up your free time. For 24 hours you’ll get your life back and that’s a big achievement!’ This sounds fairly appealing, but trying to understand it by going through my old notes taken from the anthropological literature on consumption only furthered my discomfort. Because the way that leading anthropologists have understood consumption makes participating in Black Friday hard to distinguish from buying a Christmas present for a loved one, and it is Buy Nothing Day that starts to look like a bizarre and senseless ritual.

David Graeber has argued persuasively against the contemporary tendency to use the term ‘consumption’ (or ‘creative consumption’) to encompass and explain almost any act that is not working for wages – in his words, ‘any activity that involves the purchase, use or enjoyment of any manufactured or agricultural product for any purpose other than the production or exchange of new commodities.’ This tendency, he argues, usually comes with a morality tale, a little touch of self-flagellation by which we admonish ourselves for attending too much to production, and for a snobbish denunciation of consumption that prevents us from paying heed to the processes by which most people today give meaning to their lives. While I broadly agree with Graeber’s argument and conclusions, sometimes we are doing something that can perhaps helpfully be approached through the notion of consumption – call it ‘shopping’ if you prefer.

The most explicit and prolific proponent of the morality tale that Graeber questions is undoubtedly Daniel Miller, who argues that ‘the moralists who need to use consumption for their critique of capitalism cannot understand that for ordinary people consumption is actually the way that they confront, on a day-to-day basis, their sense of alienation.’ By this logic, it is the Buy Nothing Day crowd who get it wrong, since the ‘moralistic critique of consumption actually dehumanizes and fetishizes the consumer, and thereby serves the cause of the very capitalism it claims to critique.’ Well, this is disconcerting. Miller makes his point with reference to his own ethnography of shopping in North London, where he argues that acts of consumption are often the first stage in a type of gift-giving, and are usually designed to ‘address the discrepancy between the normative ideal of the recipient and what you now know about what they, the individual, are actually like.’ You buy something for your husband that mediates between the idealised image of what a wife should buy for her husband, and the particularities of your relationship.

Put this way, shopping starts to look not dissimilar from idealised North Atlantic understandings of Christmas gift-giving, which, as Miller’s sometime collaborator James Carrier argues, should mediate the tension between a desire to be a self-reliant individual, and the desire to merge your identity in some way with your loved ones’ (the recipients’). Such gift-giving should also somehow resolve the paradox created by a mass production society in which gifts should still ideally express not only the recipient’s but the giver’s identity. (And Carrier makes his argument with reference to Henry’s Gift of the Magi.)Carrier’s understanding of gift-giving, though specific to the Christmas context, is in many ways the complement to Miller’s notion that much of what we do when we shop is merely one stage in the preparation of gifts. This is troubling. If you accept Miller’s morality tale (and his ethnography), then maybe it is Buy Nothing Day that is perverse, asking us to forego the constitution of moral familial relationships.

Alternatively, you could read this as a story about a basic and unresolved tension within anthropology, that is only intensified when anthropologists turn their lens upon those amongst whom they live in their ‘own’ societies. This is the tension between extending the courtesy of what Ernest Gellner once called ‘tolerance-engendering contextual interpretation’ to those among whom we research on the one hand, and deploying your comparative anthropological sensibilities to critique and expose the dark genealogies which gave rise to our most familiar and everyday practices on the other. Seen this way, Miller is of course right that for many Londoners, shopping is an eminently moral activity through which alienation can be partially confronted. But then, Graeber is also right (and I recommend reading his piece in full) when he points out that the ‘possessive individualism’ which underwrites the consumption and giving practices that Miller and Carrier describe (and upon which idealised North Atlantic understandings of gift-giving are in fact premised) is the self-same ‘attitude toward the material world that allowed people in certain corners of Atlantic Europe to create [slavery-dependent] colonial empires to begin with.’ To reconcile anthropology’s leading ethnographer of shopping with the Buy Nothing Day campaigners, we could perhaps turn to Alf Hornborg’s commentary on Graeber’s paper, where he observes that any consumption activity ‘implies destroying purchased physical resources in the process of creating meaning.’ Happy Black Friday.