Children’s Experiences of Childcare in Australia

Our article, “Autonomy, Fairness and Active Relationships: Children’s Experiences of Well-being in Childcare” (Cooke et al., 2018), recently published in Children & Society, provides insight into how children view their care, in a context where policy makers and academics agree that children’s subjective well-being in childcare is important, but research on this topic is limited. While some studies have examined children’s experiences of specific childcare settings (e.g. Outside School Hours Care [OSHC], Early Childhood Education and Care [ECEC]), many families use “childcare packages” (Brady, 2016), or multiple types of care concurrently. Our study was the first to examine how children view their well-being in their complete “childcare package”. 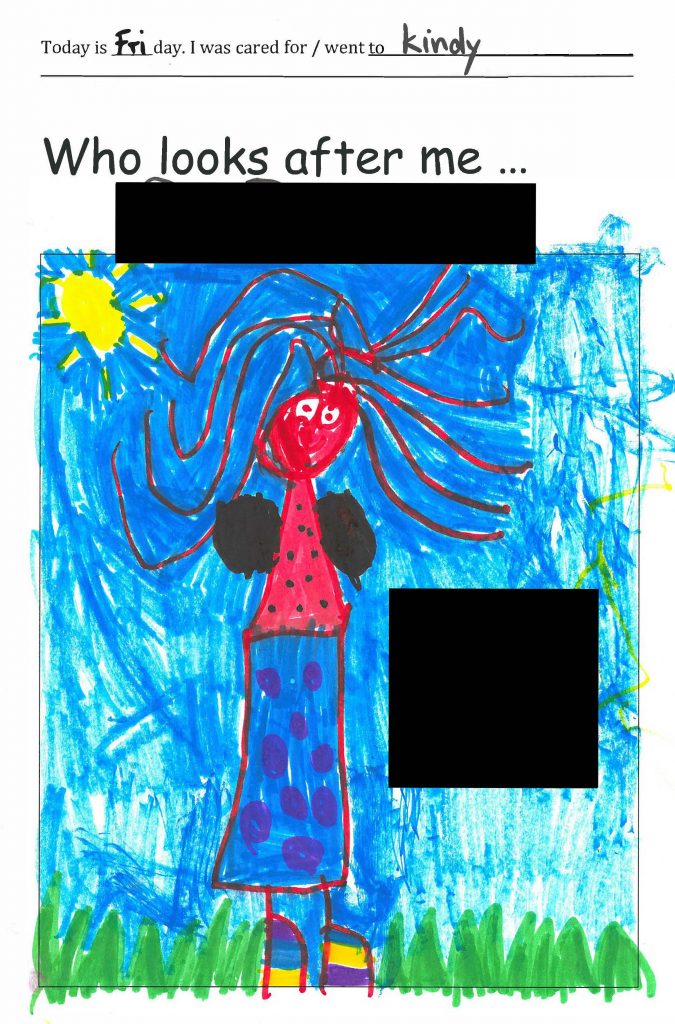 We sampled children of nurses and police because we know that their parents often experience work-life conflict and spillover of work stress into family life (Drury et al., 2014; Sanders et al., 2015; Skinner et al., 2011), yet there is no research on the experiences of children in these families. Furthermore, these families typically rely on ad hoc childcare arrangements due to variable and nonstandard work hours. Our study is therefore timely as such work characteristics are increasingly common for parents across all occupations (Brennan and Adamson, 2014).

Fifteen children from 12 families, where at least one parent was a nurse or police officer, participated in the study. Younger children (ages four to seven) were given drawing diaries and older children (ages eight to 12) were given disposable cameras to produce images over the course of a week in response to questions about who looked after them, who they played with, and their likes and dislikes. These images were then used in child-led graphic elicitation interviews to facilitate children’s ideas and discussion.

Our findings revealed that children valued autonomy in their childcare experiences. Having choice about play and food options was particularly important. The value placed on autonomy by eight-year-old Ethan, who attended OSHC while his parents worked full-time, was typical of children who regularly attended ECEC or OSHC. Ethan explained that he valued having a choice about play options:

What’s good about [OSHC] is we don’t have to stay inside the whole time and we can go outside and play lots of different stuff on the play equipment. . . within that fence there’s a lot of play stuff, a lot.

Similarly, 11-year-old Jacinta, who attended OSHC four afternoons a week, explained that one of the good things about OSHC was the food choices that were available:

Their food is amazing. We get as much food as we want. There’s just a giant platter of fruit. Then there’s a box full of food and you just pick which one you want. Like today, we had sandwiches … Loads of different options we can have.

Children did not dislike rules in childcare as such, but they disliked when rules were not explained to them. Children expressed contentment with rules whose rationale they understood and assessed as fair and, conversely, frustration with rules that were imposed on them without explanation as evident in Aiden (age 10) and Connor’s (age 8) description of the unjustified ‘no iPad’ rule at OSHC:

Interviewer: Do you remember something about OSHC that wasn’t that good?

Aiden: Not [being] able to play on our iPads.

Interviewer: You’re not allowed to do that at OSHC?

Connor: We’re not allowed and I don’t know why.

In contrast to Aiden and Connor, eight-year-old Ethan, seemed satisfied with his mother’s rules regarding household chores because he understood the rationale for them. When the interviewer asked if having chores was a good thing, he explained:

Yeah. Well, yeah, it is. Mum likes me doing [chores] because [then] she only has to do [my four-year-old sister] Jessica’s jobs. So, she doesn’t have to do everyone’s jobs. So, I do my jobs.

In addition, children usually preferred being looked after by their parents at home because they valued time with their parents, and the home setting typically allowed them more autonomy and play options than formal care. However, when children had an understanding of the benefits associated with their parents’ work, such as “shopping … [in which] they have to do work to spend the money” (Kayla, age four) and ‘food’ (Morgan, age 11), they were then generally more accepting of their childcare arrangements, even if they were not regarded as ideal:

Interviewer: Do you wish you could spend more time with one of your parents or with your

Interviewer: Why do you say that?

Morgan: Because she’s usually at work, because if Dad was at work then we’d end up paying

all of Dad’s money to go to childcare, so there’s not really a point, because last

time we did. . . we used to go [to childcare] when Mum and Dad both worked, but

Dad didn’t like working as a chef, so he was studying. But, he put [studying] on

hold because of [my younger sister].

While other studies of children’s experiences in childcare have found that they dislike rules and like having autonomy and choice, we extend this understanding. Our findings demonstrate that children did not dislike rules universally, but rather disliked rules whose rationale was not explained to them. Further, children were willing to relinquish some of their autonomy and comply with rules and childcare arrangements when they felt informed, particularly if they understood that their compliance would help their parents. The variable and sometimes erratic childcare packages experienced by children of nurses and police personnel may have coloured their experiences of autonomy and feeling informed. However, the relevance of our findings extends beyond nurse and police families to include the growing number of families where parents work variable and non-standard hours. In terms of practical implications, we recommend that parents and educators aim to provide children with a range of play and food options during childcare, and inform children about the rationale for rules and childcare arrangements.

Emma Cooke is a PhD Candidate (sociology) at the School of Social Science, The University of Queensland. Her thesis is examining children’s experiences of relaxation and spiritual well-being in Early Childhood Education and Care.

Michelle Brady, PhD, is a UQ Senior Research Fellow in sociology in the School of Social Science, The University of Queensland. Her research focuses on how social policy shapes gendered experiences and divisions of paid and unpaid work. Recent projects have examined childcare flexibility, activation for single parents, paternity leave policies and neoliberalism.

Cheryll Alipio, PhD, is a sociocultural anthropologist and Assistant Research Professor in the Department of Anthropology at the University of Maryland, College Park. Her work examines how different forms of work, such as transnational migrant labor in the Filipino diaspora, children’s work in the Philippines, and professional shift work in Australia, restructures care labor and services throughout the life course.

Kay Cook, PhD, is an Australia Research Council Future Fellow and Associate Professor in the Department of Social Sciences, Swinburne University of Technology, and Co-Director of the International Network of Child Support Scholars (INCSS). Her work explores how new social policies impact relationships between the state, individuals and families. Her Future Fellowship is a comparative analysis of women’s access to child support.