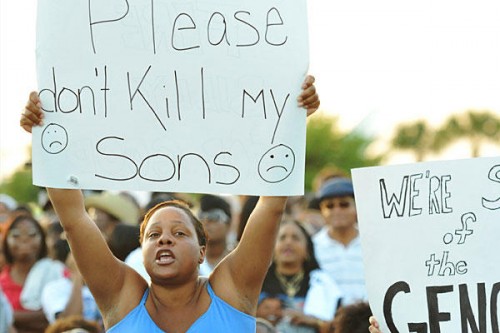 In my last post, I mentioned the larger discussion about blame for racism that cases like Trayvon Martin produce.  One consistent meme that arises every time black people protest the killing of a black person by a white person is: Why don’t black people protest when blacks kill other blacks?  After all, statistically black homicide victims are more likely to be killed by blacks than any other race.  Black on black homicide certainly happens at a far greater rate than vigilante or even police killing of blacks.  So, why doesn’t the black community protest that?  Why is it only when the perpetrator is white?    The questions (rhetorical as they may be) need answers.

These questions imply (or sometimes explicitly state) that blacks are obsessed with finding racism to blame for problems that stem from their own communities.  White people, for the most part, ask these kinds of questions and make these kinds of assertions.  Partly because whites are generally unaware of what happens in black neighborhoods.  There is no lack of protest over inner-city violence among blacks.  For example, a few years ago, there were a slew of protests over the murder of three young men in Newark, NJ.  The story, unlike many other black protest marches received widespread media coverage.  The reason was the innocence of the victims.  The media consistently noted that the kids were “good” kids, college students etc.  The status of the victims was crucial to the outrage and the media coverage.

Americans like to imagine ourselves as masters of our own destinies.  Contrary to the beliefs of many whites, blacks share these beliefs about personal responsibility.  Parents of black boys believe that they can limit the risk to their sons by being good parents, keeping their kids away from drugs, gangs, or “the street,” by earning money and moving to a low-crime area, etc.

When I brought up the Newark case in my Intro class, a student from Newark characterized the perception that blacks are whining or unjustly complaining as insulting.  She pointed out that her father had worked hard to move to the nicer neighborhood in Newark where the murders took place and that her family had a right to be outraged by the crime.  In the Newark case, the parents of the victims were successful in raising “good kids” and they were in a “decent neighborhood”, yet their children still became victims of homicide.  The protests were a realization and a complaint that some risks to their children were out of individuals’ control and therefore collective action on the societal level was required.

The Trayvon Martin case is similar in this regard.  The implication that black people do not value personal responsibility is a persistent racist stereotypes that underlies complaints about black protest.  Such stereotypes also underlie much white denial of racism in contemporary America.  The protests are not an abdication of personal responsibility but a concrete example of the sociological imagination and its corresponding democratic impulse.  Protests represent the realization that larger social forces matter and that such forces are human creations alterable through collective action.  These particular protests are a recognition that while parents can take responsibility for the lives of the children, keep them out of trouble, move to a good neighborhood etc., they cannot take off their son’s black skin nor can they – and this is the crucial part – change the cultural and structural position of blackness without collective action.

Race, Tragedy and Outrage Collide After a Shot in Florida, New York Times