How To Be a Better LGBTQ-Ally Post-Gay Marriage 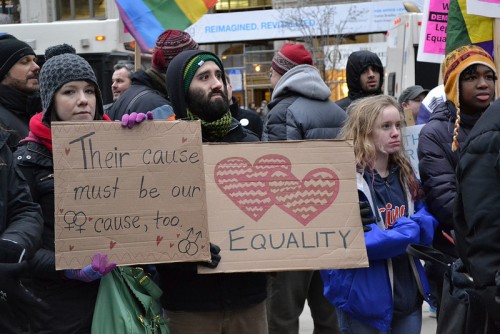 When same-sex marriage became legal, there was an outpouring of support for the gay community. Many self-identified straight men and women took the opportunity to vocalize their affirmation of gay identities and gay rights. Keeping in mind, as well, the recent public discourse around Caitlyn Jenner and the transgender community, I found it compelling to compile a list of tips for LGBTQ allies that seek to sustain and improve their support of the community during this time.

It should be noted that this list is not exhaustive, and I cannot speak for the entire LGBTQ community. These tips are merely a guideline for possible new ways for interested parties to continue their support in the post-gay-marriage world. Even the most earnest allies might find themselves lost with how to improve and continue to help. Though I only speak as a gay cisgender man and supporter of LGBTQ equality, I’ve taken some time to think about new ways and avenues for activism as well as present underrepresented views and problems facing the community at this time. LGBTQ activism can be made stronger by people of diverse backgrounds working in dialogue with each other. The importance of this list is to learn ways to foster dialogue, understanding and empathy for one another, as well as educate others on what some of the issues facing the community post-same-sex marriage are.

It goes without saying that an ally supports same-sex marriage. But it’s important to understand the context of this win. I think one can support same-sex marriage as a legal right without embracing it as the end of LGBTQ activism, nor as the tenant of it. Similarly, marriage may be more or less important to every LGBTQ individual. But, I admit, it was moving to see rainbow Facebook profile pictures. It was moving to see support from straight allies in all forms. But as the subsequent op-eds have pointed out, it is not the end of LGBTQ rights. I don’t think this precludes the historicism of the moment, nor does it exclude various othered-LGBTQ people. What’s important is the context- understanding what this moment signifies to the various LGBTQ people. A good ally should strive to understand context.

Furthermore, as activist Laverne Cox has noted, it is equally important for cisgendered members of the LGB community to be inclusive and active in the concerns of the transgender community.

Gender is a complicated issue; a very complicated one, and one that is constantly evolving. Now that publicly transgender people are just beginning to come out into the mainstream, it’s important to understand the language of how to talk about this issue. Sure, even the most understanding ally can have a slip up or moment of ignorance. This shouldn’t be demonized- I think there is an opportunity now for better education on these issues. We’re in the midst of a political moment to reinterpret what gender means and how we do gender. The first place to start is to undertake the task of understanding how trans and queer individuals have been talking about conceptualizing their communities and themselves. As well as what unique issues are pertinent to their communities.

There have been years of LGBTQ activists. But it should be noted the importance of straight-allies as well. While it would be inappropriate to speak for the community, it’s important to speak up as an ally. This could mean having various conversations with others, engaging in political action, or simply educating oneself about the issues. A straight ally can do a lot to show others how to be more accepting and empathetic to others. A frank discussion with a friend about your beliefs can change minds.

We’re not quite in a post-gay world. You and everyone you know might be “cool with it” but the struggle for LGBTQ rights is not a thing of the past. There is a wealth of work to be done for these causes. There are numerous organizations that have been doing work on causes such as teen homelessness, harassment prevention, making spaces safer, providing services to at risk use and numerous other causes. Supporting any one of these causes can make a strong statement and a significant difference in the lives of others.

LGBTQ allies are important to the community. The LGBTQ community is at a critical time in the political realm where opening minds and making tangible real changes is very possible. The help of allies is invaluable towards continuing to acknowledge and alleviate the oppressions faced by the LGBTQ community. Everything from participating in large structural changes to simply changing one’s behavior and speech can be an important and vital force.

Again, this list isn’t the end of the story. Discourse around the needs of LGBTQ people is always evolving and changing to be more inclusive. Going beyond this list, communicating with LGBTQ people to find out the needs of their specific communities can unveil other more specific ways to be involved.

Why Marriage Matters To Non-Gay Allies