The Conception of the Closet 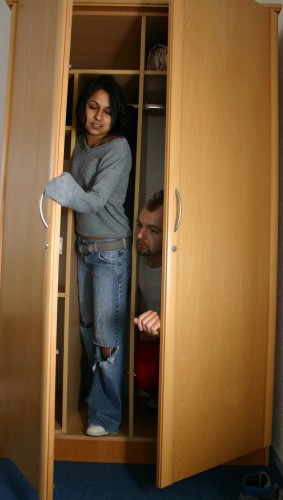 The concept of the “closet,” linguistically, served as the foundation, and means, to identify as a homosexual, or LGBTQ. Within her text, The Epistemology of the Closet, Kosofsky Sedgwick offers numerous ways to define the “closet.” However, there are two definitions pertinent to our understanding of the “closet.” The first definition of the “closet” is described as, “a room for privacy or retirement” (Kosofsky Sedgwick, 2008d: 65) and the second, more appealing, definition of the “closet” has an added word before it: “skeleton in the closet (or cupboard): a private or concealed trouble in one’s house or circumstances, ever present, and ever liable to come into view” (Kosofsky Sedgwick, 2008e: 65). To have something, or to be, in the “closet” points out something that is hidden or kept private from others, never to be discerned. It, also, points to a power relation, or antagonism, between sexualities, and sexuality known as knowledge. Currently, it is common for individuals of the LGBTQ community to ask one another if they are “out of the closet.” Yet, to ask someone if they are “out of the closet” is to pry into their secret: they are asked to elucidate, or bring to life, the sexual identity one feels they must hide and fear.

Although “coming out of the closet” has afforded some visibility for LGBTQ people, Chauncey, author of Gay New York, informs us that before the 1960s, not many gays and lesbians used the phrase “coming out the closet.” Furthermore, Chauncey states:

Given the ubiquity of the term today and how central the metaphor of the closet is to the ways we think about gay history before the 1960s, it is bracing – and instructive – to note that it was never used by gay people themselves before then. Nowhere does it appear before the 1960s in the records of the gay movement or in the novels, diaries, or letters of gay men and lesbians. The fact that gay people did not speak of or conceive of themselves as living in a closet does not preclude us from using the term retrospectively as an analytic category, but it does suggest that we need to use it more cautiously and precisely… (Chauncey, 1994a: 6)

The “closet” may pose a problem for comprehending sexuality pre-1960s, according to Chauncey, but it can prove to be beneficial in observations with past cases of LGBTQ visibility. One must not forget, as aforementioned, that homosexuality was coined in 1870, but sexuality was expressed differently during those times than it is today. Kosofsky Sedgwick, then, furthers Chauncey’s posit as she states, “yet even the phrase “the closet” as a publicly intelligible signifier for gay-related epistemological issues is made available, obviously, only by the difference made by the post-Stonewall gay politics oriented around coming out of the closet” (Kosofsky Sedgwick, 2008f: 14). One can conclude, then, the political and social popularity of the phrase “coming out of the closet” was quintessential to post-Stonewall LGBTQ identity. As both Chauncey and Kosofsky Sedgwick point out, current societal notions of sexuality, more specifically homosexuality and heterosexuality, along with Kosofsky Sedgwick’s notion of the “closet,” could not be understood without the coinage of homosexuality in the late nineteenth and earlier twentieth centuries. Yet, the “closet” serves as a significant symbol in the construction of a LGBTQ identity in general. Kosofsky Sedgwick subsequently leads one to speculate, what is the importance of secrecy in relation to the “closet?”

Returning to Kosofsky Sedgwick’s second definition of the “closet” as the veiling of a reality, one can see the power relations at hand within sexual identity development. In reference to the “closet,” and its power of seclusion, Kosofsky Sedgwick states, ““Closetedness” itself is a performance initiated as such by the speech act of a silence – not a particular silence, but a silence that accrues particularity by fits and starts, in relations to the discourse that surrounds and differentially constitutes it” (Kosofsky Sedgwick, 2008g: 3). Thus, “coming out of the closet” invokes language, and for one to speak the truth of one’s sexuality: to give a name and life to a sexual identity often held as a contemptuous admission. If one dares to not speak about their sexual identity, then one is forever forced to live “in the closet” as a silent, non-existent being. Kosofsky Sedgwick even provides an example of how such silence produces the “closet.”

Kosofsky Sedgwick elaborates about two of her friends, a man and a woman, who have been friends for many years. The man and the woman talked openly about their sexual lives, but never implicated the gender of their sexual partners. However, one day, after years of friendship, Sedgwick states, “what constituted coming out for this man, in this situation, was to use about himself the phrase of “coming out” – to mention, as if casually, having to come out to someone else” (Kosofsky Sedgwick, 2008h: 4). In this instance, it was only until the man admitted, or spoke about it, that he confirmed his identity as a gay man: or in the words of Kosofsky Sedgwick, he committed a speech act of revelation. The man broke a silence that enabled him to give life to his sociality, his homosexuality.

This account is a prime example of the “closet’s” sociality. One is not, truly, living as a LGBTQ individual unless one breaks the silence and is willing to bare it all; to “come out of the closet” for all of society to see. Yet, as with the process of coming out, Kosofsky Sedgwick warns us that, “just so with coming out: it can bring about the revelation of a powerful unknowing as unknowing, not as a vacuum or as the blank it can pretend to be but as a weighty and occupied and consequential epistemological space” (Kosofsky Sedgwick, 2008i: 77). “The closet,” and the secrecy around it, thus led to new implications in regards to sexuality. It created, according to Kosofsky Sedgwick, the epistemologies of homosexual panic and homophobia: both fabricated by the “closet.”