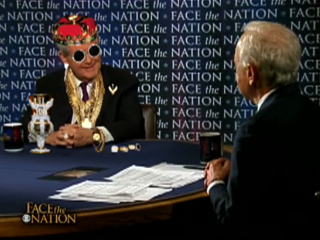 Many political candidates use their wealth as proof of their competence, work ethic, and expertise.  They craft campaign-ready stories about how a successful businessperson wishes to use their immense talents and work ethic to serve the nation.  At the same time, politicians have to convince voters that they share the concerns of the common person.  So, while wealth may be listed on the resume presented to voters, politicians omit the expenditures that accompany such wealth.  Wealthy politicians go out of their way to convince voters that while they may be wealthy they don’t live elite lifestyles.  For example, billionaire Mayor Michael Bloomberg takes the subway, while former President George W. Bush was filmed clearing brush at his ranch.  However, occasionally this façade falls away and one of the wealthy elite ends up answering questions about a 500,000 dollar Tiffany’s credit line.

Americans seem comfortable with extremes in wealth and accept, to some degree, a high level of inequality.  Neoliberal ideology (not to be confused with the American political label liberal) asserts that free markets, left alone, will efficiently and justly reward individuals for their talent and hard work.  Neoliberalism claims that some are rich because they are talented and work hard while some are poor because they are untalented and lazy.  Some consider neoliberal ideology hegenomic.  But, as Newt Gingrich found out, when Politico revealed his 500,000 credit account at Tiffany’s, American attitudes toward the rich and the poor are more ambivalent than simple categories of an undeserving poor and a deserving rich.

Americans make individualized assessments of the rich and the poor, often without altering their overarching beliefs about the poor or the rich or the economic system in general.  While much has been written about the undeserving poor, especially in regards to so-called “welfare queens” and “deadbeat dads,” similar individualistic evaluations can also be applied to the rich. As Parasad et al. (2009) writes, “The markers of the undeserving rich are an excessive appreciation and display of money…” coupled with a claim of moral superiority evidenced by one’s wealth.  Press coverage and public reaction to what the New York Times categorized as a “rich guy foible” accused Gingrich of these sins.

Gingrich’s defense was that he had no debt and was “very frugal.” Newt Gingrich attempted to paint himself as the deserving rich and simultaneously claim that if the US government was as fiscally responsible as him it would be in great shape.  In doing so, he tried to recast his wealth as a sign of success, stating that “I think I have proven I can manage money.”  His attempt to pivot the story into campaign talking points on overspending and fiscal irresponsibility is subject to the fairly obvious critique that it is not very difficult to manage money when you have enough to spend 500 grand on jewelry.  However, beyond Gingrich’s personal political fortunes, the episode reveals both the strength of and a key vulnerability of neoliberal discourse.

On one hand, evaluations of the individual deservingness of wealth (or poverty) crowd out structural evaluations of wealth and poverty and inequality in our economic system.  Amidst all the moral evaluations and the attempts for the super wealthy to claim that they are just like everyone else is the underlying premise that we shouldn’t question wealth.  After “rich-guy foibles,” few ask whether an economic system that produces billionaires and homelessness (regardless of the fairness of “the game” or the morality of individuals) is a morally-defensible (or economically sustainable) reward system.  In other words, the foundations of neoliberal ideology seem to emerge unscathed.

All That Glitters May Redefine Run by Gingrich