Football is for hope, for joy, for peace, and for … trafficking?

Football gives hope to people across the globe, both young and old. Aspirations of being a professional football player signals an opportunity to change the socio-economic circumstances of not just an individual, but potentially a community for generations to come. Football gives joy to those who watch it and play an active role in following their favourite teams through the numerous ups and downs of professional sport. Football has also been used to bring peace to countries on the verge of going to war. However, football has recently been used to traffic foreign minors abroad for the purposes of labour and sex exploitation.

I first came about the phenomenon of football trafficking during the second year of my undergraduate degree at the University of Kent in 2012. I was watching a football match, and at the end of the programme a related documentary was to follow. Now, most times, I wouldn’t bother watching what was after the football, but this documentary was different. It promised to shed light on an issue not a lot of people knew about at the time. 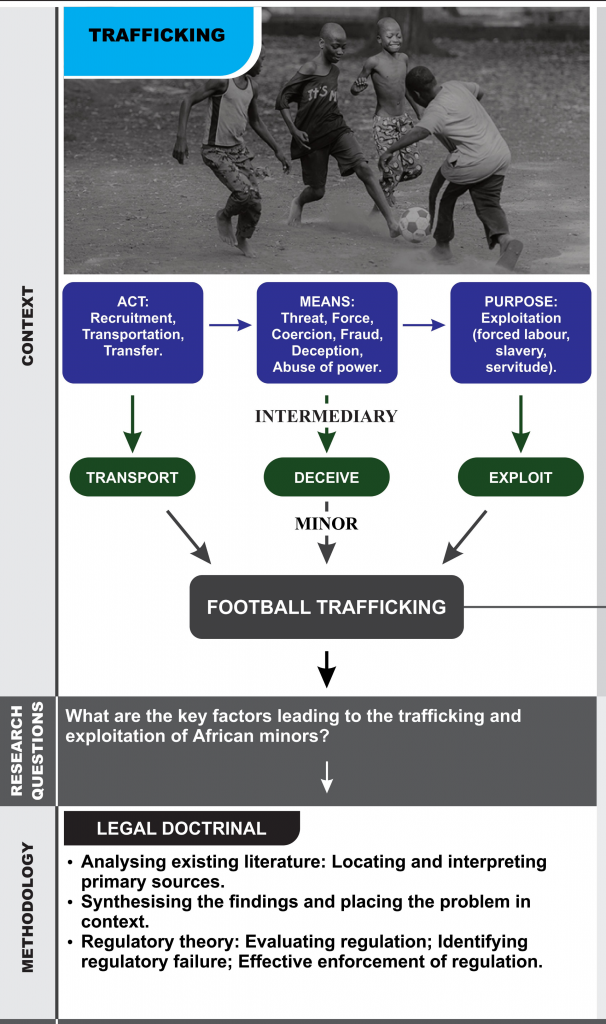 The documentary detailed the life of some African minors who were taken abroad and abandoned at train stations, hotels, and on the streets of various European countries. Unable to speak the language, being underaged without adult guidance and supervision, and lacking any official forms of identification (as the traffickers often confiscate such documents from the victim before absconding), the minors were left to their own devices in the foreign country. Having to fend for themselves, the minors have limited options of what to do in order to survive. Some turn to a life of crime, seeing as they are unable to go back home, and running away from the authorities as they have no legal standing in the foreign country. The minors seek for a means to feed and shelter, as they turn to a life of petty theft or join larger gangs. Other trafficked minors are found and subjected to another layer of exploitation, as at times they are locked away and used as domestic workers or sex slaves.

Recent examples of football trafficking which have been reported by the media includes the 23 West African minors who were trafficked to the Laos side, Champasak United in 2015, by former Liberian international footballer, Alex Karmo. Champasak had no coach, no medical facilities, no provision for education, only fed the players twice a day, and made them sleep on the floor of the stadium. In England, an estimated 2,120 children have been trafficked to the UK to play football but ended up in precarious situations. The BBC reported the story of a Nigerian boy in 2019 who was trafficked for football but ended up locked away and subjected to sexual exploitation. Other boys have been brought and ended up being “made to work on building sites until their bones break”. After the World Cup in 2018, some Nigerian boys were scammed and trafficked to Russia in the hope of joining a professional team, but have been abandoned and left to face the “ugly side of football”. 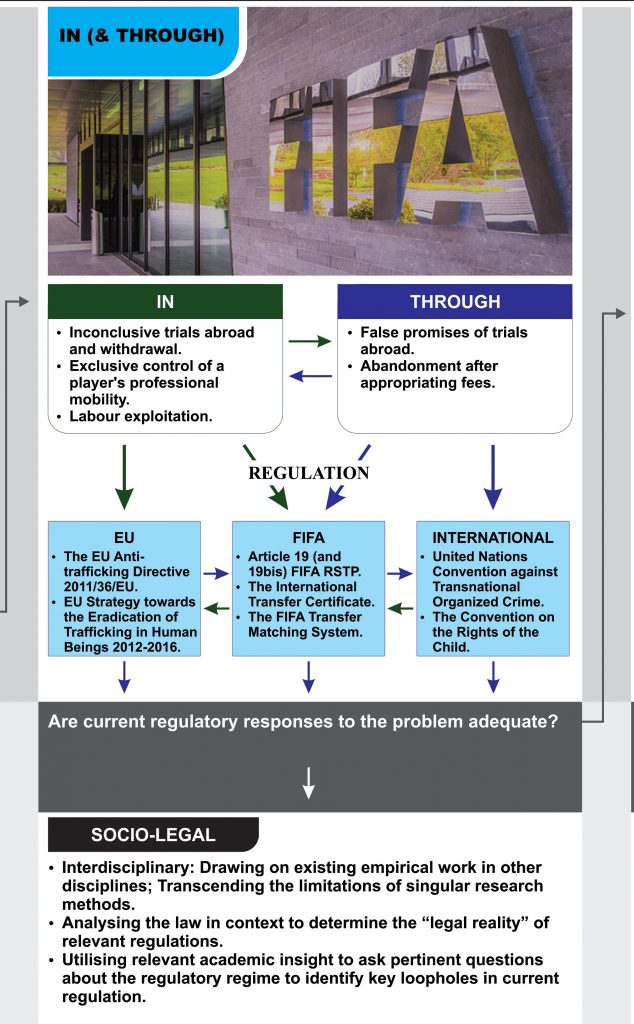 Watching the documentary and seeing the plight of the African boys so many years ago struck a strong chord with me. This combined with the overriding sense of wanting to achieve justice for my fellow Africans, by fighting for those who are unable to do so for themselves. Values that you would expect from any second-year law student in a similar situation.

The documentary embedded a fundamental question for my perspective on viewing this problem. The question was, “what within footballing regulation, has allowed these young people to end up in the hands of unscrupulous intermediaries looking to take advantage of them?” Fast forward some 7 years later, and you will find me in this moment, in the third year of my PhD, continuously reading and trying to find an answer to the question, so as to provide adequate recommendations which I hope will be adopted to offer better protection for this vulnerable group of people.

The reason for my poster, was mainly to inform and educate each and everyone that came across it about the football trafficking problem. I wanted to create a poster that paints a vivid and descriptive picture of my thesis. A poster which plots the main areas of my  analysis and showed how the different aspects are all interconnected in order to devise an appropriate solution to the problem.

This led to the final section within my poster, where I proffer an alternative means of regulating against the football trafficking problem. I do so by applying a method that places a premium on the lives of the young African boys. My research also proposes that football be used as a tool for development of African communities, to inhibit the frequently employed avenues utilised by unscrupulous persons to exploit the African minors. 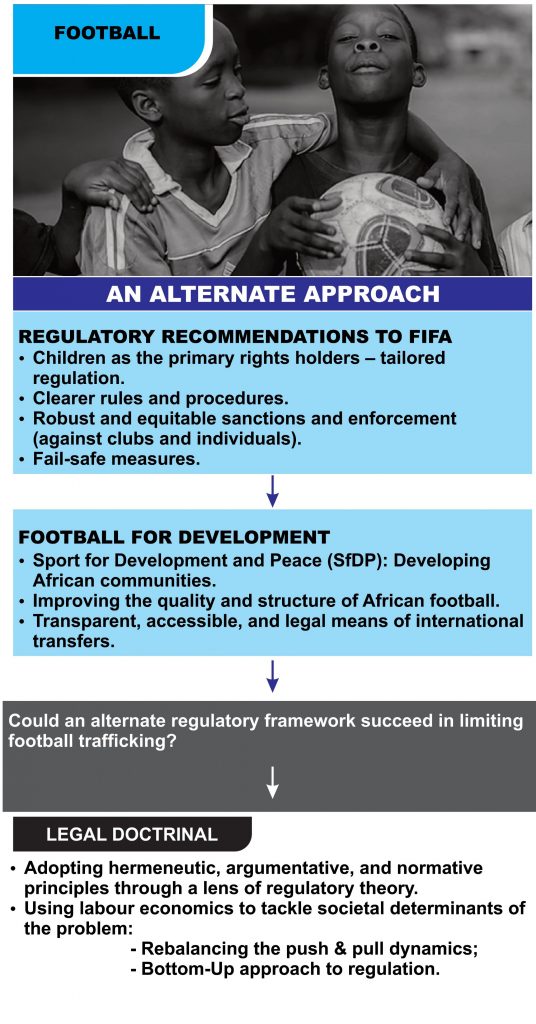 Ultimately, if football can be for hope, for joy, for peace, and for trafficking (as we have seen), then football can also be for development, and it can be used to counteract football trafficking in the long-term.

Ini-Obong Nkang is a third year PhD candidate at Nottingham Law School. Ini is interested in curbing football trafficking through the usage of football as a tool for the sustainable development of various African communities. 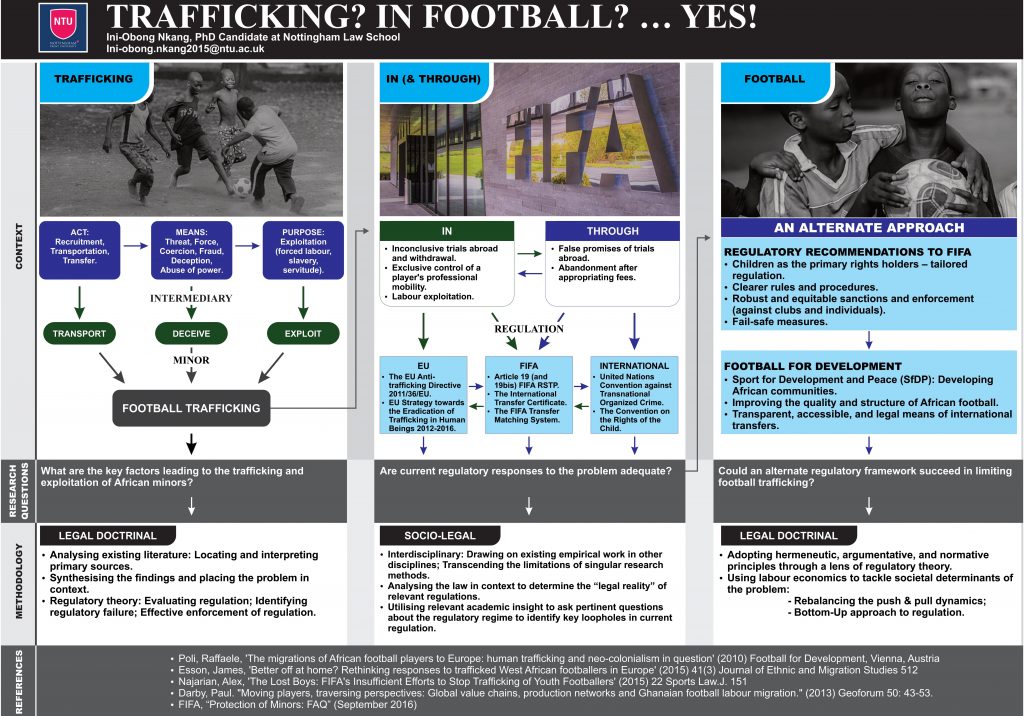