A Makeover for Cosmopolitan? 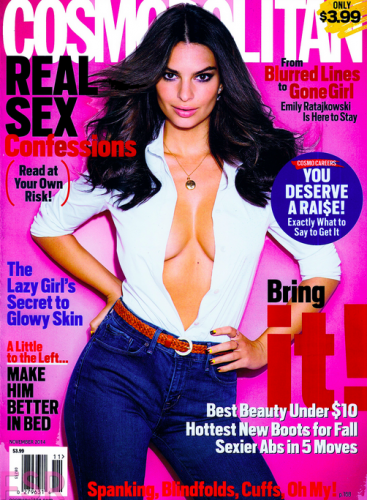 Every day I drive a half hour from my home to my office at the university and a half an hour from the university back home.  Like many of my peers, I pass time during my commutes listening to National Public Radio.  I know it is a bit of a cliché, the doctoral student in the sociology department listening to NPR every morning, but I really do feel as if my 60 minutes of NPR each day keep me on top of current issues in local and global politics, business, science and technology, and global health.  NPR is part of my routine and for the most part it is pretty predicable.

However, last week I was caught off guard by a segment in the special series “The Changing Lives of Women.”  I had heard a couple of other stories in the series.  There was a very interesting interview with the Navy’s first four-star admiral, Michelle Howard.  There was also a piece on female programmer who were pioneers of the computer revolution.  On October 14, 2014, the NPR series focused on Joanna Coles, the editor-in-chief of Cosmopolitan magazine.

My first reaction was to roll my eyes.  To be honest, I was annoyed by NPR.  I could not help thinking, with so many key issues that contemporary women continue to struggle with today, the producers of NPR dedicate 7 minutes and 27 seconds of my commute/NPR time to the editor of a trashy sex magazine.  I was confident I knew all about Cosmopolitan too.  I had spent my late teens and early 20s reading articles about how to get the man to marry you, Julia Roberts’ life, the best places to meet men, as well as excerpts from Danielle Steel novels, and the monthly guide to amazing sex.

My initial reaction was justified.  One of the first items discussed between Coles and NPR host Rachel Martin was rolling racks of clothes, shoes, and the standard stiletto.   The type of discussion I expected at my hair salon, not on NPR.  Then the conversation changed and Coles began to speak about Cosmo’s position on politics, specifically a desire to see more women across the political parties in D.C.  She spoke about contraception, making a strong and very articulate statement on contraception, gender, and politics.  She made a very determined effort to align the magazine with pro-feminist, sex-positive ideologies.  And when Martin challenged her, questioning the contradiction between the proposed position and the overtly sexualized celebrity photographs that are still frequently printed on each monthly cover, Coles responded by stating, “Well, I don’t think anyone would suggest that you negotiate for a raise with your shirt undone to your waist… I think that women’s lives are multi-led. I have no problem understanding that women are interested in mascara and the Middle East. Men are allowed to talk about sports relentlessly and yet we still take them seriously.” 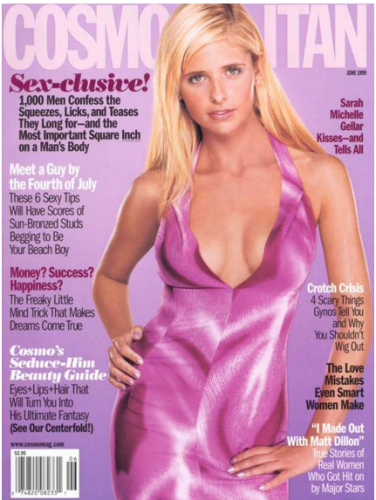 By the end of the interview I was thinking that maybe Cosmopolitan had given itself a real makeover.  After work (and a typical NPR commute home) I ended up at the drugstore.  In the checkout line I saw the bright yellow glossy Cosmo daring me to pick it up.  I could not resist the temptation and wanted to see if Cosmopolitan was a different magazine for young women today than what I used to read in my late teens.  I scanned the headlines: Ten craziest sex moves we’ve ever tried. You’re still obsessing over him…here’s how to stop. Five second stress busters.  Your new secret weapon for hotter sex. (He’ll love it too.)  Emmy Rossum: “Men only need two things – grilled cheese and sex.” Sexy, shameless fashion under $50.  It was the October issue, not the November issue discussed on Morning Edition, but I still felt a little disappointed.  After listening to Coles on NPR, I think I had convinced myself that I would also find more content related to establishing and defending political, economic, and social rights for women along side the articles about how to have the best orgasm of my life.

I did not bother purchasing a copy Cosmopolitan in the drug store that night.  I figured there was probably not that much difference between the article “Ten craziest sex moves we’ve ever tried” in the October 2014 magazine and “Sex-clusive” from June 1999.  And despite Joanna Coles’ interview, I think there are some things that Cosmo does better than others.  If I want to think about politics I will watch Rachel Maddow.  If I want to know where I can find cutout booties for under $50, I might just pick up a copy of Cosmopolitan.