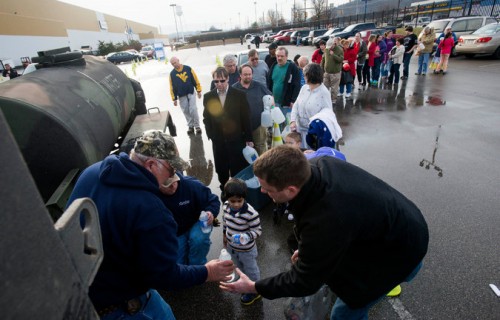 On January 9, 2014 government officials in West Virginia discovered that over 7,500 gallons of chemicals used to clean coal had leaked out of a Freedom Industries’ chemical facility and into the nearby Elk River. The location of the leaking storage facilities was just upriver from the largest treatment facility in West Virginia affecting over 300,000 residents throughout the state. Immediately discovering the leak, government officials notified the residents of Charleston and surrounding areas to stop using tap water. The government warned against water usage for drinking, cooking, and bathing. The chemicals spilled caused skin irritation, nausea, vomiting, and wheezing to several residents.

Simple images of the water showed a thick yellow substance pouring out of faucets days after the spill. Within a couple of weeks the health department notified residents that it was safe to drink. This report was lambasted by local media and citizens, with reports showing yellow water still flow out of water taps. Questions regarding the criminal and civil liability of Freedom Industries were raised and in response Freedom Industries filed for bankruptcy preventing civil suits from being filed. The state took until February 4th to convene a grand jury to investigate criminal charges on the company, a process that will take several more days, if not weeks to conclude. West Virginia has a long history of corporate negligence in the mining industry, and the state’s response is often lenient.

Following the spill, West Virginia Govern Earl Ray Tomblin sought opinions from stakeholders on enacting new legislation meant to prevent future toxic chemical leaks.  One would assume that stakeholders would imply regulators, citizens, health officials, and industry leaders; however, Governor Tomblin only invited industry leaders and trade associations. Governor Tomblin avoided concerns from health and safety officials favoring a pro-business attitude and anti-regulation perspective. This perspective is also supported from Congress, as Speaker John Boehner argued there were sufficient regulations in place to protect the safety of the American people. In his response, Speaker Boehner did not offer an explanation as to why the spill occurred if there were actually regulations in place. While Freedom Industries should being investigated, an understanding of the cause of the spill, the reactions of politicians to the problem requires an understanding of the broader corporate-state relationship.

In the criminological literature, Michalowski and Kramer (1990) proposed the concept of state-corporate crime. State-corporate crime refers to crimes that result from the construction of policies dictating the behavior of corporations and how the corporations influence and respond to these policies. Kramer and Michalowski argue that the state-corporate crime definition refers to all socially injurious acts, allowing for acts that are not codified into law, but are still harmful to society. In the context of the West Virginia chemical spill, state-corporate crime occurred because lawmakers allowed Freedom Industries to place a storage facility to sit on the river and close to the largest water treatment plant in the state. Furthermore, state law did not require the chemical storage facility to be inspected, requiring only chemical manufacturers and emitters to be inspected. Finally, state policies also do not classify the chemical released— 4-methylcyclohexane methane—as a hazardous material. This classification has two implications. First, it assumes that 4-methylcyclohexane methane is not dangerous. Second, state law requires hazardous material leaks to be reported within 15 minutes to prevent contamination. The spill reveals that this particular chemical is dangerous to society, and stricter regulations guiding the reporting of spills could have limited the damage.

In Michalowski and Kramer’s (2005) concept of state-corporate crime, a corporation requires legal frameworks of regulation and oversight that allow them to exploit markets profitably.  The local, state, or federal government provides the legal and commercial infrastructure for the corporations. West Virginia has a long history of providing a favorable infrastructure for resource extraction corporations to exploit natural resources and labor to increase company profits.  Under neoliberal forms of governance, government officials and corporations argue that regulation will restrict economic growth (Harvey, 2005). Politicians rely on corporate fundraising to get elected and in return corporations continue to receive favorable regulatory practices. In some situations the state-corporate symbiosis can lead to social harm (criminal or otherwise) (Kauzlarich & Kramer, 1993).

The cause and consequences of the West Virginia chemical spill cannot be solely laid at the feet of Freedom Industries. While Freedom Industries should be held criminally and civilly culpable for their action (or in this case, inaction), the solution to preventing future chemical spills requires a breaking apart of the state-corporate symbiosis. The question has to be asked as to why the state allowed the chemical and coal industry to get away without inspecting chemical tanks, and why the state continues to allow these industries to exploit the state of West Virginia without repercussions. Unfortunately, breaking up the state-corporate relationship is a difficult challenge and the trend in the United States is a strengthening of this bond.