Is The Sociology Finished Yet? 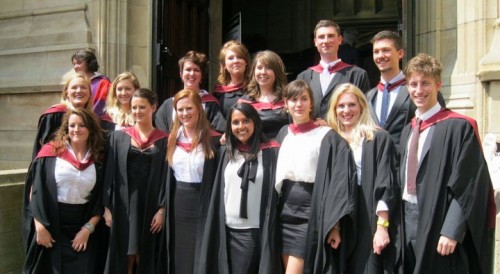 This is a guest post from Guy Sanders.  Guy is a freelance graphic artist living and working in London. He specialises in promotional design and branding for theatre and entertainment companies. He holds a BSc in Sociology and Political Science from the University of Bristol. Guy’s interests include cultural criticism and the deconstruction of nation making. He tweets @GuyJSanders

Is The Sociology Finished Yet?

I completed a BSc in Sociology and Political Science in 2011. What followed immediately was a period of indecision about continuing my studies, and a prolonged period of misplaced commitment to jobs I didn’t enjoy or do well because now this was ‘real life’,and I needed to ‘get a job’. All of this was very un-sociological. Very uncritical. Very driven by having no job and none of the various kinds of capital (economic, social, Starbucks) that came along with having a job. I now work as a freelance graphic designer, helping arts and entertainment companies find images and words that best represent their products. It’s enjoyable, challenging and involves thinking critically. But that doesn’t mean it’s wholly “Sociology friendly”, even if I have, at the very least, ditched the Starbucks.

Ideally, this article would marry narrative coherence and Sociological ideas, or about how Sociology made me a better person AND made my creative work better.
How I blended a long-term interest in the arts with a training in Sociology, effortlessly and to great effect, and how the work I produced was more meaningful and less harmful as a result.  This wouldn’t be the truth. I would love to tell you the truth but I can’t do that either – If Sociology taught me anything, it’s that there isn’t a pot of knowledge or truth at the end of the rainbow, only more questions. If you want certainties, the Philosophers can be found at the other end of the corridor, in a similar, but somehow more romantic, state of disarray.

It is three years (almost to the day) since my graduating class put on mock-archaic capes and listened to absolutely awful organ music in a Simulacrum of Oxbridge tradition. I caught the eye of one of our favourite Sociology professors, who was sitting on stage with other faculty members, and we giggled, both understanding that this enforced pageantry was a wholly inappropriate way to celebrate a successful education in Sociology. “Doing Sociology” right means pulling apart events like this. My wholehearted participation in the ceremony was undermined by a painfully acute sense of irony. It is curious that the graduation ceremony, in its abject rejection of Sociological thinking, was the academic establishment’s presentation of itself to the world outside. Almost as though Sociology wasn’t meant to leave the establishment fully formed.

After the ceremony we took pictures of each other in our black capes and red hoods. Later, in a (very) small act of rebellion,I appropriated one of these photos and photoshopped a red lightsaber in to my friend’s hand. She looked like a Star Wars ‘Sith’. Irreverent messing about, but not Sociology.

Graduating marked my passage from the secure confines of a critical academic establishment in to a world that didn’t give a damn about my skills in deconstruction, credible analysis or demystification. My Sociological lens has come to live in the shadow of life’s priorities (rent, deadlines, clients). This is not to say that my formal training was for nothing, but the discipline operating inside my head has acquired a different, fuzzier character. It plays a part in decision-making, but it doesn’t always win out. Early attempts at blanket-application of sociological thinking weren’t fruitful. Wondering about the extent to which a lack of co-presence with other drivers was preventing me from joining a mini-roundabout did not help me pass my driving test. During a stint as a low level employee an entrepreneurial start-up I remarked to a (more senior) co-worker, “I feel that your assertion of self-determination doesn’t properly acknowledge the roles of structural factors and privilege in shaping your career trajectory”. Unsurprisingly, this didn’t go down well.

If this were a satisfying narrative I would tell you about how Sociology made me a better person. Instead, the spirit of criticism developed in me by studying Sociology is now used to help people sell things. I try to avoid the (re)creation of harmful power structures, and continue to work on producing what I see as ‘sociologically correct design’, but there is room for improvement. I do find, encouragingly, that my scruples about photoshopping people’s bodies are welcomed more than they are opposed, particularly when working in Theatre.

A few weeks ago a friend from University, who I hadn’t seen for the better part of a year, remarked upon seeing me (beard, brown duffle coat, long hair in a bun): “Oh look, you moved to East London and became a Jedi”. I am no Jedi. I could try to defend the wider social merits of selling theatre, but it would be more philosophy than Sociology. What I can say is that having the tools to deconstruct the world around me is still useful – both within and outside of my working life. Meanwhile my ‘Sith’ friend is studying for a PhD in Sociology, attempting to address serious and meaningful inequalities. There is nearly a moral irony here, but it’s incomplete and unsatisfying, because the Sociology isn’t finished.