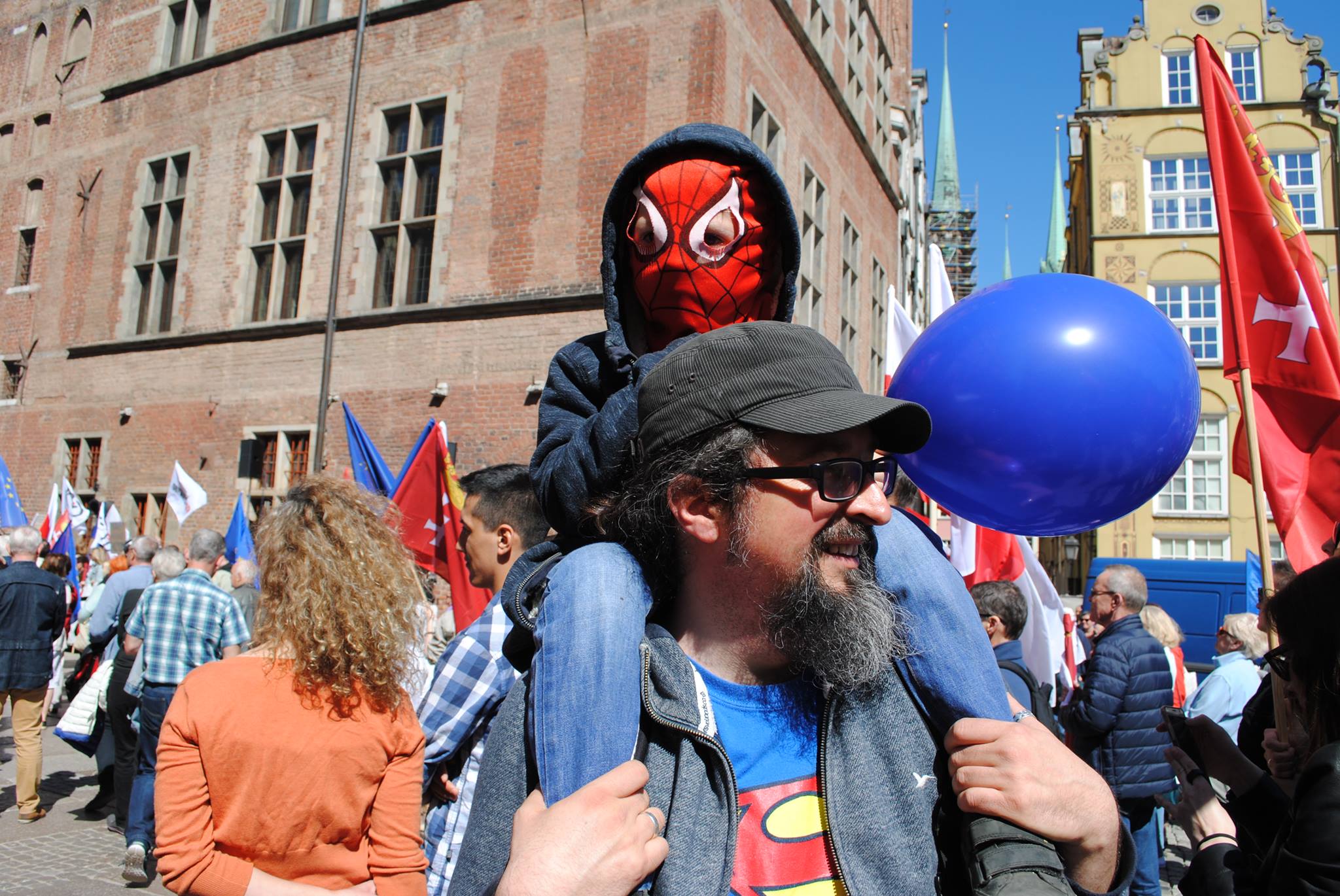 A small boy masked as a superhero on father’s shoulders during an anti-fascist protest in Gdańsk, Poland; own collection

When we see reports from protests, some of us feel uneasy about seeing children taking part. The reasons for this anxiety may vary. But it is interesting to ask ourselves what exactly triggers our reactions. Of course, photos and videos capture a fragment of reality in a specific composition, while the experiences of the participants are more integrated and general. The pictures of children protesting [1] raise in many people the fear that they may have fallen victim to manipulation. Consciously or unconsciously, we tend to question children’s reasons for public participation.

We conducted our research in Poland, where there is a vivid tradition of celebrating children protesting and fighting against foreign occupation in the 19th century and during world wars. Here, young children take part in religious rituals, which include processions in the streets. This pro-participation environment has recently changed after the increase in the participation of school children and youth in anti-government demonstrations [2][3]. In contemporary Poland, perceived not only by its citizens to be an authoritarian regime [4], with propaganda in public media and schools, parents feel compelled to introduce their children to a range of controversial topics that are not discussed at school. These hot topics include:

But small children may not understand the complex political situation. How much should a potential participant of an event know about a given case to question the actions of the authorities or to protest? Perhaps being fully aware of the issue would keep people from getting involved? Children are interesting beings who start from ignorance, unaware of the complexity behind social problems. For them, the demonstration can be an introduction to a topic or… a culmination of preparations. Their participation in a protest could be an act of manipulation or a way of exercising their rights from a young age.

Our recent article ‘Parental meanings attributed to children’s participation in street protests’ published in the journal Children & Society [5] provided an insight into parental efforts to deal with such challenges. We asked the parents who came to protest with their children what it meant for them to do it together. We approached participants of a protest organized by the feminist movement. Our results showed some parents make long-term efforts to make their children want to take part in the demonstration and to make them know the reasons for doing it. It is enough to recall the voices of two mothers to explain roughly what parents would like to evoke in their children and by what means they want to achieve it:

I would like them to be aware that they can influence what is happening around them, that they can decide about themselves and have a right to disagree with something and fight for what they want. [W1]

We show them by our example, being at this demonstration, that it is worth something. That we are citizens, not objects. [W7]

Careful conversations before and after the event are behind the scenes of even accidental participation in protests with children. Yet, some parents of older children refrain from teaching their children about the protest. Instead, they focus on socialization with their peers during demonstrations. We hope our results will be useful for organizers of protests and parents considering participation in protests with children. We do also hope that the paper would be valuable for discussion about protests as events of civic education.

The variety of meanings behind protesting together with children form a pattern and almost chronological sequences of potential learning. The model of learning we present draws attention to the time before and after the demonstration. Hopefully, our diagrams can help activists to turn protests into educational events, and not just to political practice, which such events certainly represent.