Social Movements This Summer: Listen to the Echoes 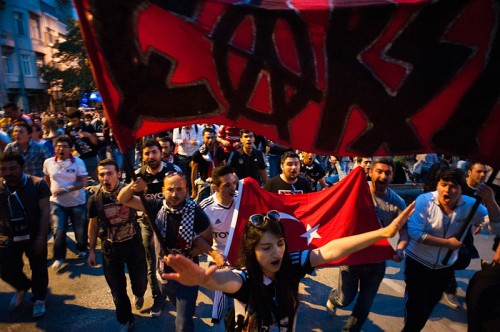 Scholars of political protest continue to attempt translation of social movements that ostensibly took a new turn in the past few years. Inspired by the Arab Spring, this current wave of contention can be traced through the Indignados and other anti-austerity uprisings, and eventually into efforts to Occupy everywhere. These movements share some characteristics: they are less leader-led than many previous movements, and participants often call for democratization but lack a clear, unified set of demands. A common tactic is the occupation and transformation of public places, as participants claim space in which they can experiment with new social possibilities (Castells 2012). This model has gained popularity with protesters in cities around the globe, its features now common in contemporary protest.

For those of us seeking to understand the trajectory and impact of this wave, the events of this summer did not disappoint. In May, protesters occupied Istanbul’s Gezi Park to oppose urban development. After Turkish police attacked the demonstrators, masses of people occupied Taksim Square and plazas in other Turkish cities, in outrage at the brutal state response and to express dissatisfaction with a much wider range of political, economic, and social concerns. Discontent had been brewing beneath the surface, waiting for the opportunity to manifest. In June, the streets of Cairo erupted into rebellion again, a continuation of the Egyptian Revolution, as large numbers of people took to the streets to express dissatisfaction with what they considered inadequate solutions to the underlying problems that spurred them to action in the first place. In the U.S. people continued to build on new energy, post-Occupy, taking over spaces of those in power to protest the further commodification of education, the implementation of policies that restrict women’s rights to bodily autonomy, and laws that continue to institutionalize racism.

The details of these displays of resistance vary depending on context. But the influence of 2011 can still be seen in the tactics and sometimes the echoes can still be heard in the chants, messaging that is intentionally vague enough to be interpreted as either reformist or radically transformative. Intentional ambiguity can build movements while saving space for subversion, making material gains while pushing the limits on what future visions are acceptable or possible. We may have to listen carefully, so as not to miss it.

A number of recent articles contribute to sociological analysis of these shifts in terrain. They suggest to scholars that there is more to these movements than initially meets the eye. Mohammed Bamyeh (2013), in his analysis of the June rebellion in Egypt, points to the underlying logic of the dynamism of the street. He explains, “The street has existed outside the state and organized parties as an alternative form of social and political life…typified by de facto pluralism; spontaneous organization; informal rules familiar to large numbers but not encoded in state law and often contradicting it; local knowledge as primary source of action; mutual aid; and an intuitive approach to solving problems.” Political leaders and intellectuals alike fail to understand this logic, says Bamyeh: “…they do not know how to think of the street as a source of lessons for political life. They think of the street only as chaos that needs to be controlled by those cultivated enough to know better.”

I think we could extend such insight to the chaos of Occupy encampments in the fall of 2011, which could help in better understanding current lingering attitudes averse to attempts at centralization and legibility. What lessons are to be learned from the failures of most Occupies to sustain beyond the encampment phase? Insightful articles (see Cultural Anthropology 2012 and Social Movement Studies 2012) have been coming out over the past two years, dissecting the practices and processes, the structures, the tactics, and the logics of internet-based network communication and their impact on mobilization. But was the failure to eventually produce concrete demands and a sustained organization really a failure at all? Were the breakdowns and impasses truly a result of lacking accountability, or this-or-that form of consensus, or do they point to something deeper? Is it possible they offer a glimpse of a creeping shift in sentiment by masses of people, unsatisfied with easy answers and the usual solutions? Perhaps a distrust of leaders and a hesitancy to congeal around legible policy proposals isn’t so much a breakdown in what form of consensus should have been used but rather an indicator that our imaginations are starting to open wider.

The analyses concerned with structures and internal dynamics are important for learning lessons about what experiments can work in different contexts, identifying obstacles and ways to overcome them. They expand our repertoire of experiments from which we can draw. But I believe we also have to be careful not to see chaos as in need of control, not to be too quick to push for defined measures that limit the unknown. These tendencies not only stem from distrust and fear, but such measures can stifle the creativity necessary to expand possibilities for futures. As one of the prescient messages of the Indignados proposed: Nos movemos despacio porque vamos lejos. We move slowly because we go far.

Bamyeh suggests that, for Egypt, new visions must arise that correspond to the flavor of the revolution, in all of its chaotic glory. He concludes that learning from revolution can produce new imagination, which is vital to creating alternatives. We will continue to feel the impact of this newest wave of contention for years to come. As scholars, we play a role in shaping the narrative of lessons learned. I suggest we take our time and look closely with open minds, as new visions are necessary to satisfy a shift in collective and diverse desires.