One History for All?: Pride 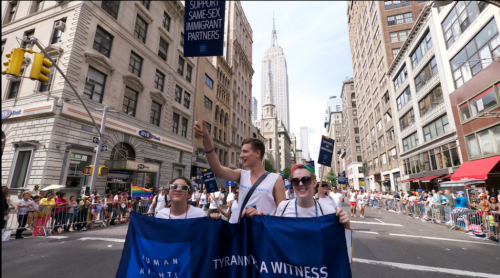 I will never forget my first Pride. I was living in New York City for the summer working as an intern at the Human Rights Watch. The office, last minute, decided to join the parade with people from the office and their families marching with signs regarding LGBT human rights issues. I got to carry the HRW banner (pictured above, I’m on the right) that read clearly “Tyranny has a Witness.” How many people can actually say their first Pride was one that you got to be in the parade, let alone in New York City? The whole parade we walked the behind a float with drag queens that had “It’s Raining Men” on repeat. I’ll never forget watching the people on the sides, decked out in rainbow flags from head to toe, and a few protesters with signs. When we got to Christopher Street, the home of Stonewall Inn, the crowd thickened with hoards of people waiting to party the night away. Being in that parade was electrifying. Being part of an event that celebrated diversity and human rights and my (not then out) self is something I will never forget.

But what is forgotten throughout Pride month is the history of the LGBT rights movement and why we celebrate. (Hint: it’s not about marriage equality). What is lost amongst the corporate sponsorship is the message of visible difference in the street, marching to take back our space and to celebrate ourselves and to celebrate being different. What is erased is the diversity within the LGBT community, along with the white-washing, patriarchal, and homonormative reduction of a group of individuals to a singular community. While my post today is not meant to retell the entire history of the LGBT rights movement, it is important to know that it doesn’t begin with Stonewall. So then, why do we always attribute that last Sunday in June to the riots that served as a “shot heard around the world?” Is the original tradition of Pride dead?

According to Stryker (2008:82), “The ‘Stonewall Riots’ have been mythologized as the origin of the gay liberation movement, and there is a great deal of truth in that characterization, but as we have seen, gay, transgender, and gender variant people had been engaging in violent protest and direct action against social oppression for at least a decade by that time.” She writes of at least three significant protests across the US, beginning nearly a decade earlier than Stonewall, from Cooper’s Donuts in May 1959, to Dewey’s in Philadelphia in 1965, and Compton’s Cafeteria in 1966. In all three instances, some of the most regular of patrons were drag queens of color who lived in low-income (often described as “seedy”) neighborhoods, and were often associated with sex work and drugs. While the motivation for each riot is slightly different, in each instance the patrons were denied some form of service or right to belong due to the nature of their work, their affiliated community, and their gender presentation and/or presumed sexuality, and so they fought back against the management or, even worse, against the police.

So then, if there is a history of rioting, especially among communities of poor drag queens of color and sex workers, why is Stonewall named the birth of the gay rights movement (as we know it)? Stryker explains that each riot was by no means random: each neighborhood, economy, and social environment created a perfect hotbed for a riot. Unlike the previous riots, though, Armstrong and Crage (2006) explain that enough social change had occurred in time that primed large numbers of socially marginalized people to not only riot, but to initiate commemoration, or collectively remember, the Stonewall Riots in 1969 compared to the other riots. The aligning of particular policies and laws, the rates of policing, the coming of age of the Baby Boom generation, the political climate of the Vietnam War, the location of Christopher Street, the involvement with the Mafia all worked together to create enough frustration that the patrons and nearby community fought back at Stonewall and remembered. Unlike Dewey’s or Compton’s or Cooper’s, this time, we were not going to take this violence anymore. So it is this last Sunday in June that we march in solidarity and memory of Stonewall, partaking in a tradition of remaining visible and celebrating our difference, or so we think.

In this collective memory, however, Stonewall has been white-washed, masculinized, and commercialized, erasing the presence and role of trans and POC people in the riots. The Gay Liberation Front, the national organization formed after Stonewall, was often critiqued for its domination by white gay men and, like other organizations such as separatist lesbian feminist cooperations, was critiqued for its perceived marginalization of women, working-class people, and transgender people. For example, the first Pride marches were called “Gay Freedom” or “Gay Liberation” days, completely erasing the wide variation, participation, and individual struggles of other members of the community. In fact, it was not until the 1980s that “Bisexuality” and then even later “Transgender” were even added to the Pride LGBT acronym.

Today, Pride’s meaning has changed drastically from its traditional roots, as I have found that many of my own friends do not even know the history of the riots (or any riots for that matter), or how important of a role race, class, and gender played in the creation of Pride. Rather, Pride is now marked with corporate sponsors such as Amtrak, Walmart (which has been known to also take anti-LGBT stances), Delta, ATT, BudLight, Chipotle, and MasterCard. Even in 2012 when I was in the parade, the words on everyone’s lips were “gay marriage,” not the wide array of  (intersecting) political and social concerns regarding “the” LGBT community including immigration, suicide, adoption, employment discrimination, or healthcare access. How quickly has Pride, which has such a positive message and rich history, become a large party and celebration  for those to celebrate who they are, while forgetting where we have come from, who has been there along the way, and where we still need to go.

When I sat down to write this post, I had originally decided to critique Pride and its erasure of trans and POC history as well as its rising corporatizing and homonormative messages. I still believe that is all true. But I also think that Pride serves as one space that we can witness this amazing thing- queer individuals taking the streets, refusing to be the same, and celebrating who they are.  I think the bottom line for me is, we need to remember our past to keep moving forward, but also never apologize for our differences. Pride to me is more than a celebration, it is an achievement of liberation, claiming the old chant and call to action: “We’re here, we’re queer. Get used to it.”

Kates, Steven M. 2001. “The Meanings of Lesbian and Gay Pride Day: Resistance through Consumption and Resistance to Consumption.” Journal of Contemporary Ethnography 30(4):392-429.