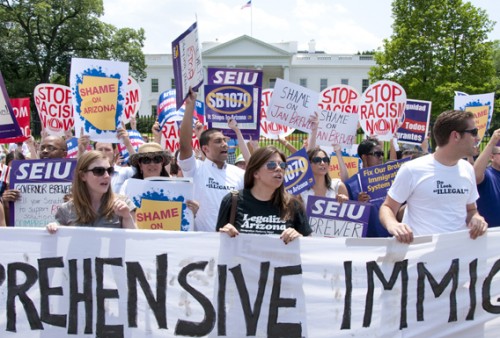 A few weeks ago, John Tanton, who I’d previously not heard of, made the front page of The New York Times. Tanton has been central to founding and nurturing prominent anti-immigrant groups like Numbers USA, FAIR, and the Center for Immigration Studies – groups now aligned with America’s right-wing.  What caught my eye, and what likely made the story front page worthy, was that Tanton originally intended to form centrist/liberal organizations to combat immigration.  However, as the report notes, “most liberal groups saw immigrants, even illegal ones, as minorities to be protected, rather than economic rivals.  Unions saw potential members; Democrats saw voters.”  Tanton and his groups would find needed support on the political right and unwanted support on the far right as white supremacist groups made anti-immigration a central piece of their agendas.

Anti-immigrant groups’s failure to persuade key interest groups affiliated with the Democratic Party like labor unions, environmental groups, or black civil rights groups meant that the immigration debate would not pit foes on environmental or economic issues against one another.  Instead the pro-immigration and anti-immigration forces would battle on the field of racial politics rather than environmental politics or economic politics.  For example, instead of an economic debate between business elites who want cheap labor and labor unions who want to protect workers from labor competition, both business and labor oppose the stance of groups like FAIR.

In the past, unions were receptive to protectionist appeals.  Today, labor union support of pro-immigration policies is not simply about “new members” but a challenge to the basic economic argument that immigrants drive down wages.  Labor unions now insist that a disempowered work force leads to lower wages and that illegal status not immigrants themselves disempowers migrant workers and drives down wages.  Here unions cast the problem as one of social position rather than inherent characteristics of migrant workers – a decidedly anti-racist framing that casts inequality as the result of social structure rather than innate characteristics.  The departure from the racist positions unions took in the past reflects the alignment of unions with the pro-Civil Rights coalition that found a home in the Democratic Party in the 1960s.

While Tanton himself has flirted with (if not wholly endorsed) white supremacy and the pseudo-science of racial eugenics that help fuel early 20th Century anti-immigrant sentiment, anti-immigration activists insist that their calls for mass deportation and greater border security have nothing to do with racism or race.  However, if we look to institutional actors, racialized politics seems to play the largest role in determining whether those actors are pro or anti immigration.  The question that arises is whether these coalitions will hold if our nation ever moves beyond anti and pro immigration to seriously debating the particular issues of immigration reform.  Or will the racialized politics that drive myths about crime waves and conspiracy theories about a Mexican takeover of the Southwest, or Muslim’s preparing to enact Sharia Law, prevent the public from engagement with the specifics of immigration reform?

Tanya Golash-Boza – A Confluence of Interests in Immigration Enforcement: How Politicians, the Media and Corporations Profit from Immigration Policies Destined to Fail