Visualising the social space of housing in England

How can we represent sociological relations in a meaningful and visually appealing way whilst at the same time capturing the complexities of social and economic life? At this year’s British Sociological Association conference in Manchester, my poster aimed to address this question by bringing together elements of the work of the two sociologists Pierre Bourdieu and Otto Neurath. In brief, my poster depicts how their thinking can help to visualise and thereby help to better understand the social space of housing in England. While Bourdieu has provided me with the conceptual and methodological framework on the concept of social space, Otto Neurath’s work on pictograms offers a novel way of integrating pictograms in correspondence analysis (CA), a visual statistics method deployed in my analysis.

By drawing on Bourdieu’s and Neurath’s work my aims was to interrogate the social and economic positions of individuals and households in relation to how they are housed, both in terms of housing tenure but also in terms of the type and age of the dwelling they occupy. To what extent does social class, income, age or household type influence the ways in which people are housed? As an exploratory statistical technique, CA allows for an interrogation (via a visualisation) of the data in order to discover underlying patterns, which can then be looked at in more detail. To begin with, Bourdieu’s concept of social space has been very helpful in this regard.

When Bourdieu talks about social space, he doesn’t refer to any concrete physical space but rather to the positions individual agents or social groups occupy in relation to others in a given social and economic context. Most characteristically, Bourdieu draws on the statistical technique correspondence analysis in order to produce visual representations of such social spaces. Bourdieu, himself, has actually pointed out that his thinking in terms of social spaces is closely linked to correspondence analysis.

Correspondence analysis is essentially a statistical technique that transforms a cross-table into a two-dimensional map, in which the categories of the table are plotted according to their statistical association. This means that (row and column) categories of a table with similar distributions will be represented as points close in space and categories that have very dissimilar distributions will the positioned further apart. Let me illustrate this with a specific example.

The starting point is the following cross-table which shows household level data taken from the English Housing Survey 2014/15. The row categories show the categories household type, occupational class (NS-SEC), income quintile, age of household reference person, dwelling type and dwelling age, whereas the column breaks down the data by housing tenure (i.e. social renters, private renters and owner occupiers). Correspondence analysis transforms the variance captured in this table into a two-dimensional (social) space, along an x and y axis. 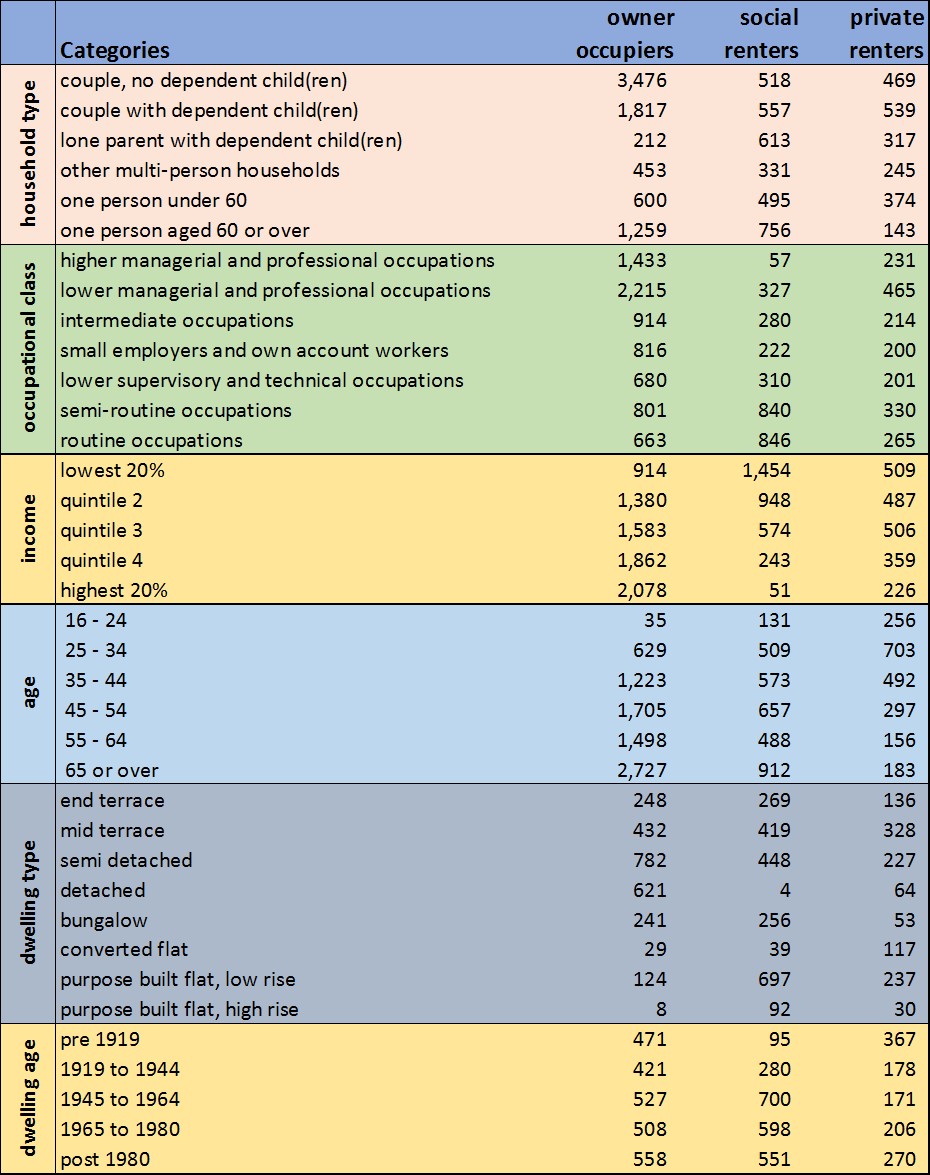 A new use of Neurath’s pictorial statistics

Before turning to the interpretation of the visualisation, let me briefly talk about the symbology used in the correspondence analysis map and how it relates to the work of Otto Neurath. Neurath’s aim was to develop a new symbology and visual language in order to ‘represent social facts pictorially’, as he put it. To achieve this he developed a broad range of symbols, also known as ISOTYPES (International System of Typographic Picture Education), which he used in his graphs. As Vienna (in the 1920s) was the place where he developed many of his initial ideas, his visualisations also became known as the ‘Vienna Method of Pictorial Statistics’. The graph below provides an illustration of such pictorial statistics, depicting the transformation of the weaving system in the England of the early industrial revolution. In the given example, each ISOTYPE symbolises a certain number of workers or production output, as indicated in the graph below. 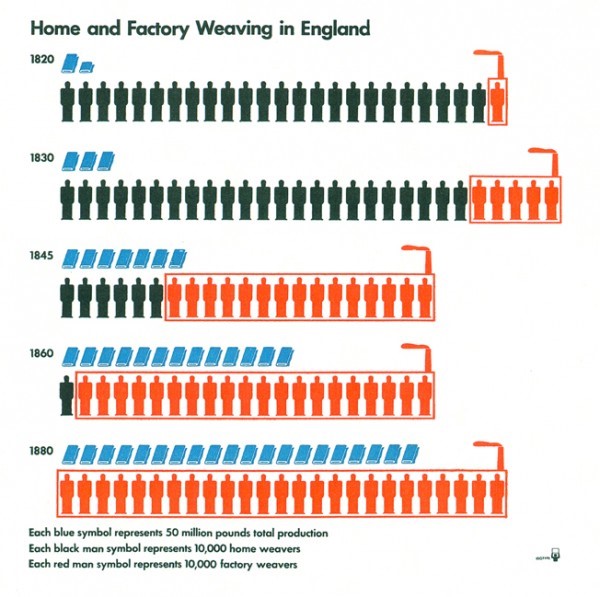 In relation to the CA maps, Neurath’s ‘pictographic language’ will serve as an inspiration rather than as a strict guideline. Wherever possible, Neurath’s symbology will be adapted in order to represent the categories of the variables used in my analysis. These include the following:

The CA map and its interpretation

Having performed the CA using the previous table, we arrive at the following visualisation, also referred to as CA map, as the aim of this analysis is to map the social and economic relations of housing in England. 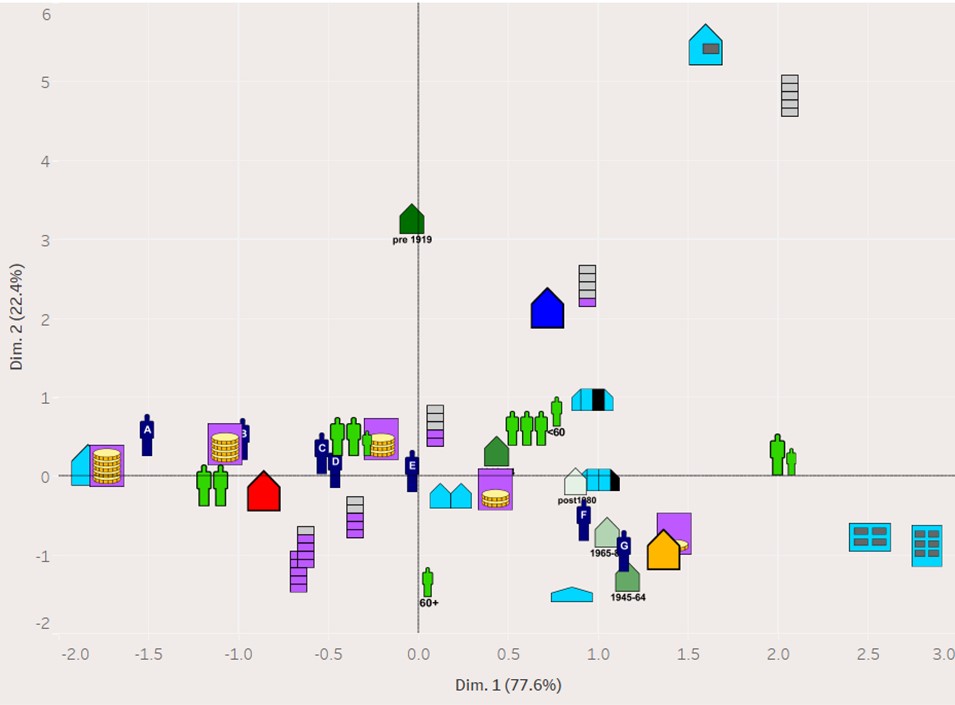 The map captures a broad range of the statistical relations of the aforementioned table. The following points are some of the main findings that the map illustrates: