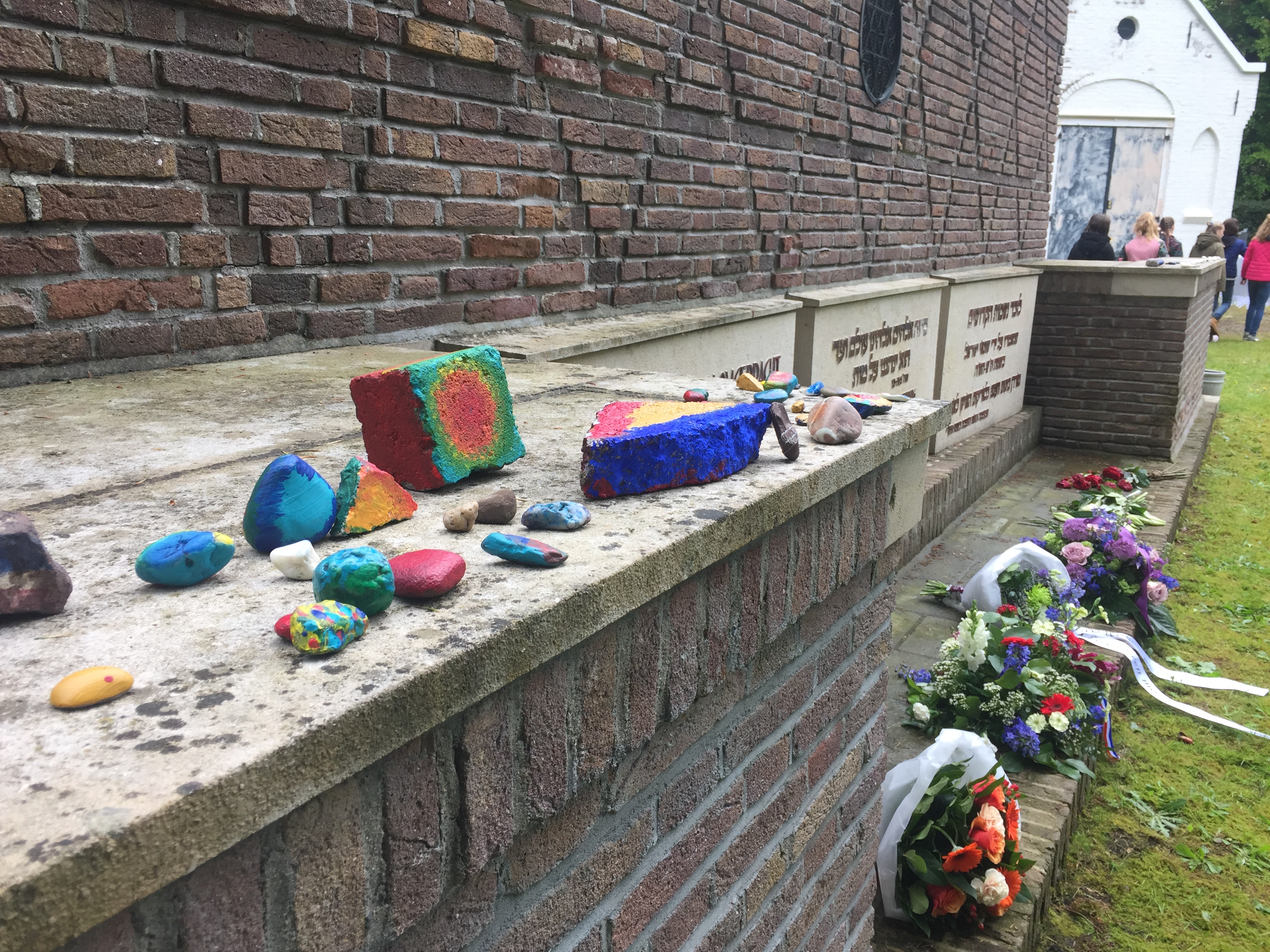 The children are busy with the finishing touch when I enter their classroom. “Lest we forget”, is written in the middle of the poster that they just made. Around, multiple hands are drawn in which every child has written why commemorating World War Two (WWII) is important to him or her. I’m joining this primary school class today to ‘their’ monument, a Jewish graveyard with a WWII memorial. At the graveyard, all children place a painted stone in front of the memorial. Every year, class seven and eight (10 to 12 year old pupils) design their own commemoration at this memorial, to reflect on the war and remember the losses.

It is a common phenomenon in the Netherlands. Up to the present day, 76 years after its ending, WWII is still vividly remembered. New memorials are still being built and the number of people attending commemorations is growing. Especially children and youth are actively involved in many remembrance events, as they are considered the next generation that should take the baton and keep the remembrance of WWII alive.

However, what does it actually mean to this third and fourth generation since WWII to remember a war, that, most often not even their grandparents experienced? Why would they prefer to remember and commemorate this period in history? And how? In our study, recently published as ‘The post-war generation remembers: A mixed-method study exploring children’s attitudes towards World War II commemoration’ in Children and Society 1,we searched for answers to these questions. Through group interviews as well as questionnaires, we gained insight into the perspective of many  children and youths  on war remembrance.

The main aim for children in the Netherlands to commemorate was to ‘learn lessons from the past’.

Girl, 18 years: We should never forget what happened in the past. When you forget the past, you are doomed to repeat it.

This is in line with our collective narrative of WWII. This narrative, taught in educational settings, museums and during commemorations, focuses on WWII as a moral compass, and its remembrance to learn citizenship values like tolerance, democracy and equality. Scholars have raised their concerns about this portrayal of WWII, which limits critical thinking about the war in its own context.

Besides learning lessons, children also commemorate because it is a cultural tradition. This suggest that, in line with the theory of Assmann2, cultural memory in which history is transferred by monuments and rituals, is becoming increasingly dominant.

Lastly, children relate to commemoration on a social and emotional level. Social aspects play a role when children explain their reasons to commemorate.

Girl, 16 years: The commemoration became more important for me in the last two years, with all the terrorist attacks and so on. (…) I think you have to come together in difficult times, because together you are stronger.

How do children want to remember WWII? Rather than the performance of specific rituals, children mention various general aspects that contribute to meaningful commemoration. Firstly, it is crucial for them to comprehend: to understand the context of who and/or what is commemorated and to be able to attribute meaning to the rituals performed. Children often expressed their agreement or discontent with a ritual based on their comprehension of the meaning. Secondly, war is an abstract concept for many children. They have a need to make the concept of war tangible, to be able to imagine or visualize what it is like to experience wartime.

Boy, 11 years: I think it is good that soldiers are present. Some are very old, and some are even injured. If you see that, you can imagine even more what they did for us.
Boy, 10 years: They also have medals. You start thinking: Why are these people there?
Boy, 12 years: Imagine that you were a soldier and that you had to try to liberate everyone. And that you just had such a thing [a weapon]. That really intrigues me.

Thirdly, the topic of inclusiveness was raised often in connection to meaningful commemoration. Opinions about who should be commemorated varied broadly. Notably, children reflect discussions and opinions that are present in public debates around the national day of commemoration in the Netherlands. Lastly, most children had strong opinions about how a commemoration ought to be. The ‘right atmosphere’ was linked to feelings of sadness, dignity, and respect.

Girl, 13 years: Sadness is one of the words that commemoration is associated with most. The atmosphere needs to be suitable, which means not too cheerful.
Girl, 14 years: Just do it as it ought to be. So not inventing so many things, but just as it has always been.

In conclusion, our study provides guidance for local parties involved in the organization of WWII remembrances in how to organize and involve children in meaningful commemorations. Openness towards critical perspectives should be stimulated, so children can decide, well-informed, how they continue and carry the memory of WWII forward. Results from the present and further studies may elevate discussions and bring societies a step closer in worthwhile remembering with post-war generations.

Do you want to dive more into our findings? Check out our research article.