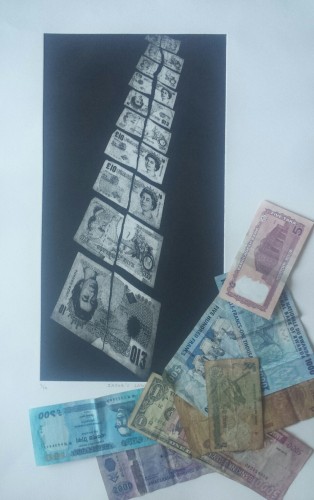 In my post a fortnight ago, I picked up on a topic that Johannes Lenhard had engaged with on Sociology Lens earlier this year – the apparent immateriality of new monetary forms. From paper money, now unbacked by gold and promising the bearer nothing more than an ‘identical replacement of itself,’ up to the monetary ether that circulates in the rarefied market for foreign exchange derivatives, back down to London’s increasingly cashless public transport system – money takes on a disembodied, virtual and almost ghostly character. Cryptocurrencies like bitcoin might seem like the epitome of monetary virtuality. And, as I discussed in my last post, attempts to embed bitcoins – which exist only as records of balances and transactions between bitcoin ‘addresses’ – in physical tokens may be treated as an unwanted distraction by cryptocurrency enthusiasts.

So what is bitcoin? The (very) short answer is that bitcoins (with a small ‘b’) are tokens native to a payment system called Bitcoin (with a capital ‘B’). This payment system was designed explicitly to do away with the need for trust – or ‘trusted third parties’ – in monetary relationships. The monetary infrastructures that we find ourselves enmeshed in today, organized around sovereign currencies like the pound sterling or the US dollar, tend to rely on two types of trusted third party: central banks or central government, and private commercial banks. We trust the central banks not to ‘debase’ our currency (or lower its value in relation to goods and services we need), and we trust private commercial banks to handle our transactions (and ideally to not profit excessively or unjustly from doing so). And we (sort of) trust these private banks not to contribute to monetary crises that may ultimately lead to the debasement of our currency. Bitcoin (the payment system) solved a problem that had been theoretically dealt with by those whom Bill Maurer might term ‘money nutters’ in the late 1990s. This was the ‘double-spending’ problem, which arises in any decentralized payment system that does away with intermediaries like central banks and commercial banks. In short, if you have no trusted third parties (or clearinghouses) for your monetary transactions, the following situation may arise: you have $100 in your account, and owe $100 to two separate parties. You send your $100 to them both. Without a trusted third party (such as your bank, or their bank) mediating the exchange, there is no way to determine whose claim upon that $100 is legitimate, and you may appear to have discharged both your debts, while only one of your creditors is able to spend the money you sent to them ‘both’.

The Bitcoin solution is in the ‘blockchain’, which is in effect a complex accounting ledger held on the computers of each person running the Bitcoin software. If A wishes to transfer bitcoins to B, that transaction is broadcast to everybody on the Bitcoin network, who is invited to check that A’s balance has not previously been sent elsewhere. The transaction is then time-stamped and added as a new block to the blockchain, secured against later tampering by what is known as a ‘proof-of-work’ algorithm. The first computer to complete the proof-of-work puzzle (and so secure the network) is rewarded with a new batch of bitcoins (this is called ‘mining’). Thus another problem faced by decentralized payment systems and currencies is solved: the absence of a central issuer like a central bank. Bitcoin’s commitment to getting rid of trusted third parties (and identification of a link between untrustworthy private banks and untrustworthy central governments) is quite literally written into the first block of the blockchain: amidst the code is inserted the line “The Times 03/Jan/2009 Chancellor on brink of second bailout for banks” (see here). And in successor projects to Bitcoin, like Ethereum, which seeks to apply the blockchain technology to areas such as corporate governance and financial contracts, the commitment to trustlessness is made clear: ‘one of the primary purposes of a cryptocurrency is to eliminate the need for trust.’ So, if not trust, what makes Bitcoin work? In the words of the Bitcoin Foundation – a steering group roughly analogous to the Internet Society – ‘as a non-political online money, Bitcoin is backed exclusively by code.’ One way to make sociological sense of this is to treat Bitcoin not as immaterial or virtual, but as an eminently material currency and payment system, rooted in the materiality of the code. This is the approach taken by Bill Maurer and his colleagues, who argue that cryptocurrency enthusiasts are ‘digital metallists.’ Paralleling the discourses of advocates for gold-backed money, they background social relations of credit and foreground materiality as a source of value and monetary freedom. Still, these digital metallists don’t entirely do away with trust – for them, Bitcoin is ‘about eliminating the need to trust governments and corporations and about learning to trust the Bitcoin algorithm instead.’ Dispense with trust in social relations, and trust the code.

The sociologist Nigel Dodd, as part of his ongoing research into bitcoin/Bitcoin, has expressed his doubts about this approach, arguing that the refusal on the part of some digital metallists to accept the fundamentally social nature of money may doom their project to failure. At the launch of his book The Social Life of Money, Dodd argued that Bitcoin is a little like our current economy on ‘acid’ – and I am inclined to agree. While Thomas Piketty describes a situation in which the rate of private capital growth is faster than the rate of broader economic growth, and one-sixth of the European population is likely to inherit more than the lifetime earnings of the bottom half of the same population, Bitcoin ownership is even more unequal. The neoliberal economy has the Forbes Rich List; so too does Bitcoin (as indeed does HoboNickels, a cryptocurrency that actively rewards hoarding). But the hyper-neoliberalism of the Bitcoin is even more visible in the ‘Bitcoin 2.0’ projects like Ethereum and Counterparty, which apply the blockchain to purposes other than currency transfer. The Ethereum protocols do deliberately bypass the tendency, apparent in Bitcoin, for mining to become centralized and reliant upon ‘millions of dollars of capital to effectively participate’ – and this is commendable. But the emphasis placed on decentralization and trustlessness leads Ethereum’s developers to endorse Robin Hanson’s futarchy concept – whereby democratic policy setting is delegated to market speculation – as a path towards creating ‘decentralized autonomous organizations.’ And with Counterparty, ‘trustless’ financial contracts can be entered into using the Bitcoin platform (Ethereum has developed its own separate blockchain). Taking Maurer’s point about trust in the code further, this video shows Chris Ellis from Feathercoin talking about using the blockchain’s timestamp function to replace trust in journalistic claims, and to develop what Aditi Bagchi calls ‘parallel contracts’, whose terms are not fixed at the moment of entering into contract, but continuously altered in line with the contractor’s communicative acts. (Where Bagchi imagined the state judicial system would determine the applicability of a given communicative act, here the embeddedness of each communication in the time-stamped blockchain does away with the need for the state).

And it is here that Émile Durkheim, grandfather of modern sociology, for all that he is unfashionable, can come in handy for making sense of crypto-utopias. Brett Scott has recently argued that cryptocurrency enthusiasts try to replace the state (a Hobbesian Leviathan) with code as a kind of techno-leviathan, ‘a deified crypto-sovereign whose rules we can contract to.’ Durkheim objected to Hobbes’ notion that men, as discrete individuals, authored the machine of their own domination. Equally, though, he rejected Herbert Spencer’s notion that society was simply a set of contracts entered into with each other. (And I would argue that Bitcoin, especially Bitcoin 2.0, might be more techno-Spencerian than techno-Hobbesian). For Durkheim, ‘everything in the contract is not contractual’, and in the ‘non-contractual elements of the contract’ true social solidarity can be found. As Keith Hart has argued, an emphasis on the non-contractual element of the contract might form the basis for a more hopeful monetary utopia. And as one of Nigel Dodd’s students has remarked, ‘money is cool now’ – but it needn’t be quite so cold.