Forward March: The Next Destination for Feminism 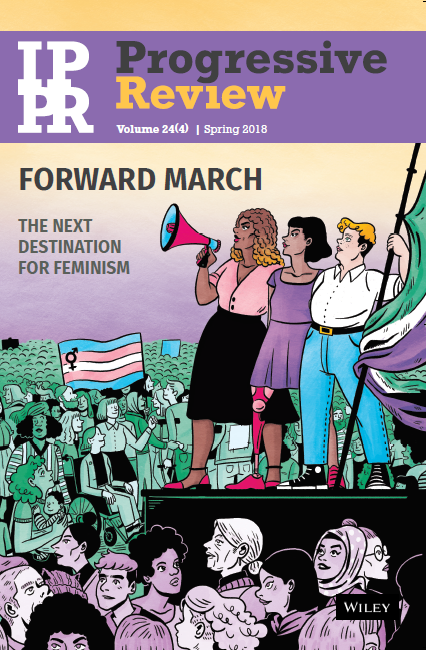 An estimated five million people around the world marched on 21 of January 2017 to protest the sexist behaviour of the incoming US President, Donald Trump. Even as these marches took place, the scope seemed to expand and something shifted in the way that everyone, and especially women, were thinking and talking about feminism. This is an abridged version of the editorial from the most recent issue of the IPPR Progressive Review, which is free to read until the end of April.

In the year since these marches, gender has been at the forefront of political debate on both sides of the Atlantic. The #MeToo campaign, started by Tarana Burke, which took off in the wake of allegations against Harvey Weinstein, has encouraged women around the globe to come forward with their stories of sexual harassment, highlighting the prevalence of their experiences. Cabinet ministers, political appointees and journalists in the UK have had to stand down in light of their past misconduct. While still abhorrent to many, such behavior would not long ago have gone unchallenged by those with in powerful positions, and been accepted by many as par for the course. And the rights of trans men and women are finally being discussed in mainstream debate, through discussions on how institutions – from schools to political parties – can be fully inclusive regardless of gender identification.

At the end of 2017, the Merriam‐Webster dictionary declared ‘feminism’ the word of the year. Brilliantly 2017’s Time Person of the Year was the “Silence Breakers” – people from all over the world who spoke out against sexual assault and harassment, acknowledging the dam-busting nature of the year’s bravery and revelation. As one ‘silence breaker’, Megyn Kelly, put it: “I always thought maybe things could change for my daughter. I never thought things could change for me.”

This new energy in the debate and in activism on gender equality presents progressives with a challenge and an opportunity. Placing the advancement of the position of women – as well as men who suffer from patriarchal systems – at the heart of the progressive project would require a major break from the status quo. Doing so, as well as being the right thing to do, could bring new activists – who may have protested for the first time at the women’s marches, for instance – into broader and party politics. There are therefore pragmatic as well as moral and economic reasons for progressives to prioritise gender in their political project.

But the task is a challenging one. Changes in the public acceptability of sexist behaviour and sexual harassment in politics, as well as media and policy attention on issues like the gender pay gap, create an impression that the pendulum is swinging towards gender equality; a sense that the tide is turning or, as one campaign puts it that “Time’s Up”. But, while it is buoying to see things like women wearing black and taking female dates to the Golden Globes to celebrate their solidarity with those who have experienced sexual assault, it is worth asking, what has really changed? Of course, things take time to change, but in a year of great unrest in Hollywood, the Academy still felt able to nominate only men as directors at the Globes, and at the Grammys only one woman went home with a gong while attendees wore white roses as a nod of support to #TimesUp. In Britain it took an excruciating week of media trawling through Toby Young’s Twitter history before he eventually resigned from a government role – but the fact remained that a British government led by a woman still felt able to appoint a man with a penchant for Tweeting about women’s breasts in the first place.

And so there is a long way to go. 100 years since the first women in the UK got the vote, just six out of 23 full members of the UK cabinet are women and only 32 per cent of our MPs are women. While 2017 saw the first trans woman on the cover of British vogue, it remains the case that almost half of trans school pupils in the UK have attempted suicide and, according to new Stonewall research with YouGov, two in five trans people have experienced a hate crime in the past 12 months. Official statistics show that men earn 18.4 per cent more per hour than women1 and more recent gender pay gap reporting (a step forward in itself) has found that, of the 967 large British employers that have reported so far, 84 per cent paid women less than men per hour.2 With little over a month to go until the 4 April reporting deadline, only just over 10 per cent of firms expected to need to report have reported. Female journalists at the BBC were silenced for raising the issue of huge disparities in pay at the public broadcaster. And this is before one considers violence against women in the UK in its many forms, the prevalence of everyday workplace sexism in sectors less visible than politics, and the stubbornly gendered division of unpaid work.

Globally, too, the past year has seen a mixed bag of successes for feminism as well as setbacks. New Zealand has the first pregnant Prime Minister, for the first time women are allowed to drive in Saudi Arabia, and Serena Williams became the first person to win 23 Grand Slam singles titles, winning the Australian Open final while pregnant without dropping a set. But, in 72 countries around the world same-sex marriage is still illegal,3 and across Central and West Africa four in 10 young women were married in childhood. Depressingly for the UK, given the cross-pollination of political ideas and shared political experiences across the Atlantic, there are three quarters of Trump’s Presidency left to go, and he still commands substantial support with approval ratings of around 40 per cent approval ratings. And this is before one considers violence against women in different communities in the UK, the fact that women of all classes can expect to earn less than men, the prevalence of everyday workplace sexism in sectors less visible than politics, and the stubbornly gendered division of unpaid work.

What is occurring in both national and international public debate and attitudes is therefore less an unstoppable wave of feminism, steadily turning over each stone of the patriarchy, but a battle of ideas and ideologies about the world and how it should be. Progress can be made and battles can be won, but those wins are by no means inevitable; they are also reversible and so must be defended. An observed decline in democratic values amongst young people shown in the World Values Survey,4 and the rise of anti‐immigration sentiment and authoritarian beliefs in the West, all show that the road to progress can face blockages, or indeed turn backwards. That means it is urgently important that progressives respond to the current moment of renewed interest in the feminist agenda, and make a politics of gender equality foundational to the project they seek to advance.

The goal should be nothing less than an emancipatory politics of gender. That means freedom from violence, expectations about identity, and discrimination, as well as equal power and independence.

Achieving these goals will require understanding the different experiences of diverse women and men, and including everyone in the movement to greater gender equality. Any other kind of progressive politics or activism cannot claim to be emancipatory. Although the #MeToo campaign and the women’s marches inspired many thousands of people (predominantly but not exclusively women) to take to social media and the streets, both have faced criticism for not recognising the contribution of, nor including and mobilising all women (or men). Last year’s march faced controversy over who it was for and whose interests it served; particularly whether the largely white, often middle class, and pussyhat-wearing crowds were truly open to women of colour, working class and trans women, and cognisant of the multiple disadvantages those women face. Although the American organisers of the Women’s March changed the goals to include civil rights for other minorities, when it came to issues that didn’t directly affect large swathes of the same women who took to the streets for those marches – such as Black Lives Matter, or the Dakota access pipeline protests – people asked where the rest of the movement was. These debates have served to highlight profound questions of what it means to be a woman, whether and what criteria should be set to determine membership of the movement for gender equality, and what goals the movement should have.

Crafting an emancipatory politics will also necessitate understanding and rethinking our political economy of gender as well as key sectors of the economy that women experience – such as care and socially reproductive services. While the entry of women into the labour market and hugely improved access to good jobs are certainly progress on the previous status quo, the move from the ‘family wage’ of the 20th century to the ‘two-earner family’ left little space for care and social reproduction, which are now pushed to the margins, either privatised or outsourced depending on class, and which remain highly gendered. Women – – especially ethnic minority and working class women – are more likely to be low-paid, to do care and housework in unpaid time, to require care later in life, and have been most affected by austerity-driven cuts to state support. Achieving equality will require ensuring women’s jobs provide equal security, and enable all people – men and women – to lead a life which includes family and community. Care, and the current crisis of care, are central to this; our current economic system rests on exploitative relationships of care, but the boundaries of economic and social reproduction can and have been changed in the past.

The most recent issue of Progressive Review seeks to contribute to the above goals and debates by examining three questions.

The issue is free to read until the end of April, and we hope it inspires you to join us as we march on.

Follow and join in the conversation online, including through further pieces bringing in more voices from across and around the feminist and progressive movements at ippr.org/insights/ippr-progressive-review%20#IPPRfeminism