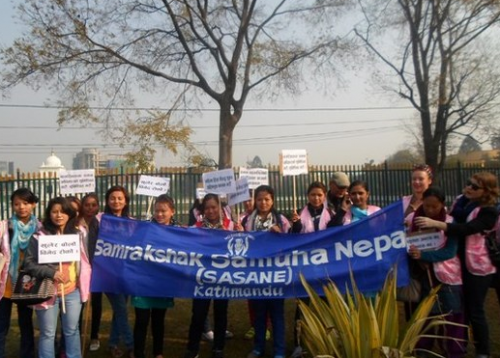 In ten days I’ll get on a plane from New York and travel for 15 and a half hours to Kathmandu, Nepal.  I’ll stay in Nepal for four weeks, living in a volunteer house with 13 foreigners, all volunteering at various organizations and institutions in and around Kathmandu.  Some volunteers will work in hospitals or medical clinics, while others will teach English in local schools, community centers, and orphanages.  There is even a program through the Ministry of Agriculture Development Department of Livestock Services to work on livestock breeding projects, disease prevention, and animal health policy.  I’ll be working at Samrakshak Samuha Nepal, SASANE, an anti-trafficking NGO established in 2008 by a group of former Nepalese victims of human trafficking.

The sexual exploitation of women and girls in the developing world has once again become a global campaign since the abduction and rumored mass marriages of over 200 schoolgirls by Boko Haram in mid April.  A-listers from Michele Obama to Ellen DeGeneres have been photographed holding the “Bring Back Our Girls” hashtag.  And a recent report from Amnesty International suggested that authorities in Qatar have failed to protect female migrant workers from abuse, including forced labor and human trafficking.

Ironically, I have no background in human trafficking or the global sex trade.  My interest was in Western volunteer abroad programs that provide temporary staffing to women’s NGOs in developing nations.  I expected to be sent to a school or similar educational setting.  However, I was placed at SASANE because I requested a position in the most popular organization under the umbrella of women’s empowerment programs.  This was the first thing I learned about what women’s programs were the most appealing to foreigners volunteering in the developing world.  Even before Boko Haram and the report on migrant workers in Qatar, it seems that saving women in developing nations from sexual exploitation was a hot topic.

What makes sexual exploitation the most desirable volunteer assignment for foreign philanthropists is something I plan to explore through ethnographic observation and in-depth interviewing.  At this moment I’m thinking through a different question: how will my personal and academic background impact my volunteer service at SASANE this summer?

I have several issues that I struggle with regarding my placement at SASANE.  Beyond issues of neoliberalism and the questionable effectiveness of the skill sets taught to women in developing countries, I also struggle with an issue of cultural positioning and point-of-view.  As a feminist and student of the social construction of sexualities, I have learned to view the sex industry from a sex-positive frame.  Obviously, I do not support sexual violence or sexual exploitation but I also know that many women enter the sex work voluntarily.  In Nepal, the line between voluntary and forced sex work can be blurred by moral and cultural norms.  Legislation such as the Human Trafficking Control Act of Nepal of 1986 conflates sex work with sex trafficking, making it legally challenging to separate sex trafficking from volitional sex work.  In addition, as in many countries, in the event of a raid or arrest sex workers are punished more frequently and more severely than traffickers and customers (Subedi 2009).  Although NGOs have stepped in to assist in the termination of sex trafficking, the moral discourse and rhetoric associated with some anti-trafficking NGOs has been criticized by sex workers, scholars, and policy makers; even former workers and volunteers have questioned their effectiveness (Heron 2007; Tiessen 2012; Vodopevik and Jaffe 2011).

I’ve done research and I know SASANE is a well established and respected organization. Therefore, I’m more concerned about my upcoming emergence into this organization.  What role will I play?  What role should I play?  How do I bring my experience, education, and understanding of global gender structures into this organization, in this current time, while still respecting the cultural, traditions, and values of my host environment.  How do I avoid becoming just another middle class white woman traveling overseas to save poverty-stricken brown women from brown (and white) men?  Can a western volunteer really impact the day-to-day lives of women in the developing world?  Can I promote sex positivity in a conservative culture?  As is frequently the case for me, I have more questions than answers.  However, in a few short weeks I might have a better way of not only answering these questions but proposing many more.

Tiessen, Rebecca, and Barbara Heron. 2012. “Volunteering in the Developing World: The Perceived Impacts of Canadian Youth.” Development in Practice 22(1):44–56.

Vodopivec, Barbara, and Rivke Jaffe. 2011. “Save the World in a Week: Volunteer Tourism, Development and Difference.” European Journal of Development Research 23(1):111–28.