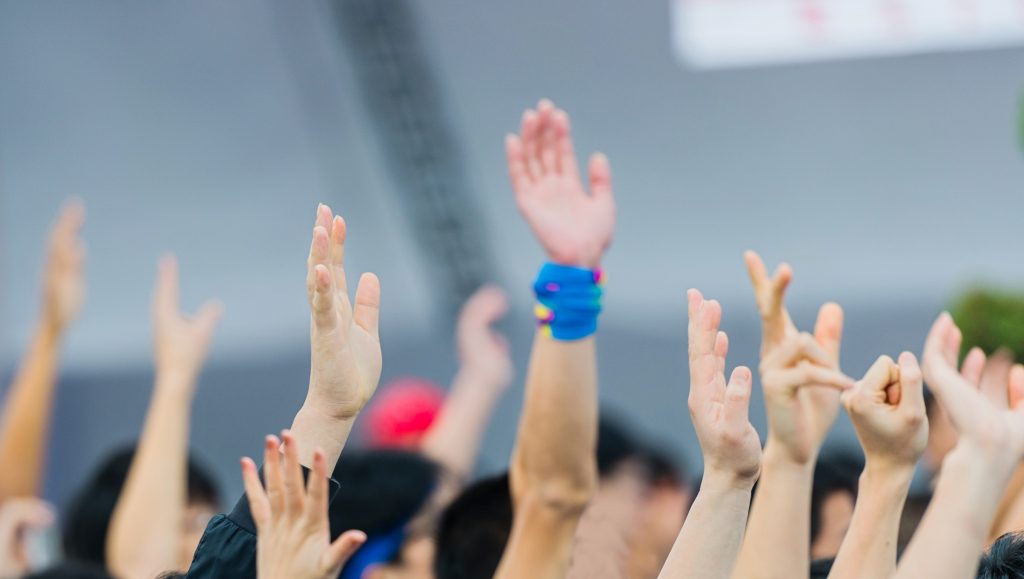 Following World War II, sociologists became particularly interested in collective behavior, or what was sometimes referred to as the “psychology of the crowd”.  Fueled by their disbelief of the spread of Nazism and authoritarianism, these scholars sought to understand how collectives could come to widely uphold authoritarian tendencies-even if they had never previously engaged in similar political activity.  These early studies largely focused on individual psychology, comparing crowd behavior to a contagion that spreads and possesses otherwise harmless people.  This narrative changed in the 1960’s and 70’s during the Civil Rights movement.  Rather than a destructive force, crowds were reframed as social movements able to rationally use resources to their own ends.  Unlike early collective behavior theories, contemporary research focuses on the productivity and rationality of such movements.

While this epistemological shift has introduced new ways of thinking about crowd behavior, Fuist and Williams (2019) have recently asked sociologists to reconsider how we might use “outdated” collective behavior theories in the contemporary context, particularly their focus on authoritarianism and collective irrationality.  “’Let’s Call Ourselves the Super Elite’: Using the Collective Behavior Tradition to Analyze Trump’s America” (2019)[1] discusses how the 2016 election and Trump administration has brought back old concerns about authoritarianism and collective behavior.  Certainly, Trump’s 2016 rallies drew attention nation-wide and sparked concern over the candidate’s ability to energize and sway crowds.  News outlets frequently reported on the inflammatory chants that swept over rally crowds, such as “Build the Wall!” or “Lock her up!”[2].  Moreover, these rallies frequently provoked violent confrontations between Trump supporters and Democratic protestors[3].  It’s thus unsurprising that the 2016 election caused Americans to consider whether our capacity for political dialogue had broken down or if there was something potentially dangerous about the collective nature of the alt-Right.  Given this, Fuist and Williams revisit previously abandoned collective behavior perspectives to understand the Trump administration and the extreme behavior of its political supporters.

In short, the authors argue that we can characterize our current political moment in relation to mid-century collective behavior frameworks that centered authoritarianism.  However, rather than relying on psychological accounts to explain why individuals are collectively motivated to be violent, the authors focus on how broader discourses and group identities fuel collective political behavior. First, the authors argue that we can characterize our political moment by the growing support for right-populist politics-particularly among those that feel disaffected.  Drawing from a wealth of literature on populism, Fuist and Williams affirm that our current political moment is unique not just because authoritarian figures have risen in prominence, but because of the populist rhetoric they wield.  Generally, populist ideology uses an “us-them” rhetoric to argue that power should be in the hands of the people rather than untrustworthy elite establishments.  The authors indicate Trump uniquely mobilized this ideology:

“Republicans who supported Trump, Cruz, and Rubio all displayed highly authoritarian tendencies.  What separated Trump voters from all supporters of other Republican candidates was a populist mistrust of elites.  Bernie Sanders voters scored high on anti-elitism as well, yet Sanders supporters trusted experts, though not authorities, while Trump supporters mistrusted both….there is a set of variables, including authoritarian tendencies, mistrust of elites, and mistrust of experts, which may have shaped voters’ choices” (p8).

It is these sentiments that drove disaffected voters-those that perceive themselves to be alienated by American elites-to vote for Trump.  Unlike traditional Republican candidates, the authors argue that Trump was able to tap into this emerging populist discourse and speak to a block of voters who did not necessarily feel represented by “expert” politicians.  As the authors state, “While bragging about having better boats is a strange kind of populism, we nonetheless see that Trump, here, rejects a hierarchy that would disadvantage his base, casting himself as the embodied representative of popular will against the failure of the elites” (p10).

Fuist and Williams (2019) additionally indicate that the collective behavior surrounding the 2016 election was partially motivated by racialized resentment, strain, and perception of declining class status.  Like many other political commentators and social scientists, the authors point to the correlation between support for Trump and perceptions of global threat.  The perception of whites’ declining status in comparison to racial minorities and immigrants led to a very real resentment of other races and rising xenophobia.  Moreover, literature on collective behavior tells us that perceived threats are as motivating as real threats; Trump-a man very talented at stroking fears-was thus able to fuel this racially-charged narrative and gain support.

Finally, our political climate can be characterized by new, emerging norms regarding appropriate political action.  Following Trump’s election there has been a rise in hate crimes in the United States[4]. This rise is due, according to the authors, to the fact that Trump’s formal political position allows him to legitimize perceived threats and justify other’s violent actions.  This argument is in line with early collective behavior theories that used social norms to explain seemingly irrational behavior.  Similarly, the rise in hate crimes and untraditional political behavior of the Trump administration can be explained via the development of new norms regarding public and political behavior.

Thus, the authors are able to apply the authoritarian roots of collective behaviorism to explain our current political moment.  However, Fuist and Williams do so without falling into the trap of pathologizing the alt-Right. Rather than using this model to explain the psychologies of Trump-supporters, the authors focus on the emerging discourses in this movement and their role in constructing individual and collective identities.  In short, the authors avoid pathologizing these individuals as xenophobic, racist, or irrational and instead look at how they are impacted by and mobilize populist and xenophobic discourse as well as how they adopt legitimized norms.

In addition to its theoretical significance, Fuist and Williams’ argument may be a useful lesson for handling political conflict for Americans more generally.  Reactions post-election have frequently used psychological explanations to characterize Trump supporters[5] [6]. Moving forward, focusing on discourse and collective identities rather than individual motivations can help us understand how to create widespread change.  Moreover, it can give us insight into similar trends in different contexts that we can learn from.  For example, many political commentators have drawn explicit parallels between the American alt-Right movement and Brexit.  Medhi Hasan, for example, stated that the striking similarities between these movements “…relate to illiberalism and authoritarianism; nationalism and racism; anti-intellectualism and anti-elitism.  The votes in favor for both Brexit and Trump, for example, had much less to do with economic anxiety or poverty, and much more to do with cultural anxiety and racial resentment”.  Again, Hasan’s comments lead us to consider Brexit as a result of widespread discourses and collective trends, rather than individual psychologies.  Fuist and Williams’ framework’s also illuminates the motivating factors behind Brexit.

For example, Brexit supporters share much of the populist discourse rampant in America, including distrust of experts and the feeling of being disaffected.  Joe Twyman, the head of political and social research at polling firm YouGov, is quoted as saying, “What we’re seeing is a rise in the number of people who are dissatisfied, disapproving, distrusting of political institutions, political parties, the establishment, the media and, wrapped up with that, the experts.”[7].  Additionally, many attribute Brexit to rising racialized resentment and xenophobia.  Vox reports that British immigration doubled between 1993 and 2014, largely due to the financial opportunities available in the European Union. Consequently, anti-immigration sentiments have been linked to resentment of the EU[8].  Moreover, these tensions have driven new norms regarding political behavior and hate crimes.  For example, Mark Lander of the New York Times writes that Prime Minister Boris Johnson’s unusual and aggressive political behavior “keeps propelling the country every deeper into uncharted political territory, where centuries of unwritten rules and conventions are giving way to a brawl over the future of one of the world’s democracies.”[9] Norms concerning political behavior are thus shifting, making room for previously unheard of inflammatory actions.  Moreover, Brexit has been credited with giving individuals a sense of freedom to air racist sentiments, as evidenced by the steadily increasing rates of British hate crimes[10]. The xenophobic nature of Brexit has consequently loosened Britain’s norms concerning the acceptability of expressing hateful rhetoric.

Brazil’s recent election has also made American headlines and repeatedly drawn parallels to our current political climate, with some even referring to Jair Bolsonaro as “Brazil’s Trump”[11].  Brazil has also seen a rise in populist discourse, such as increasing conversations regarding the failings of mainstream media[12].  Bolsonaro’s popularity is partially fueled by deep racial resentment, specifically towards black lower-middle class individuals whose income has dramatically increased due to efforts like collegiate affirmative-action programs[13].  Moreover, Brazil’s political norms have shifted in similar ways to our own. Bolsonaro, like Trump, has unabashedly spoken out against social minorities with a striking lack of restraint, for example, notoriously once saying that Afro-Brazilian communities “aren’t even good for breeding anymore”.

Thus, although shocking, this politically conservative moment in America is neither unprecedented nor unique.  Rather, these phenomena-populism, racial resentment, and new political norms-can similarly be found around the globe.  By using the collective behavior framework proposed by Fuist and Williams (2019) we are able to attend to broader trends and the collective forces behind authoritarian movements rather than focusing on how individuals are psychologically motivated to adopt authoritarian behavior.  In essence, we are able to move away from pathologizing radical individuals and towards seeing how they fit into emerging cultural phenomena-in short, towards a truer sociological analysis of collective behavior.