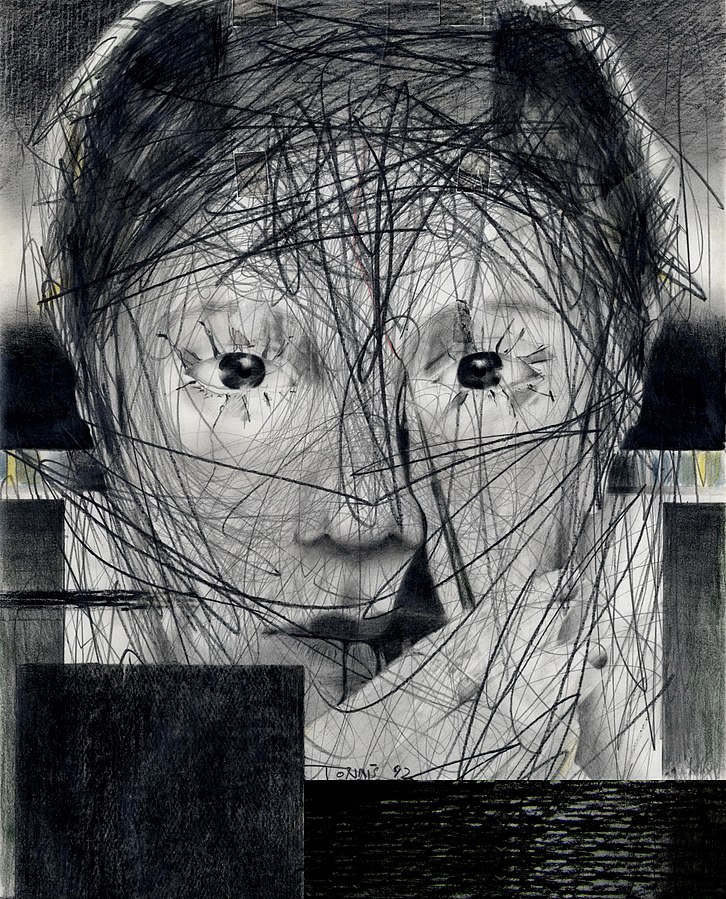 Sam was 12 when she began cutting herself.[i] She had been grounded by her parents after she pierced her ears without their permission. ‘I don’t know if it was revenge’ she explains, ‘[but] I felt like “you’re not letting me be who I want to be. I’m an individual, I should be able to do what I want to do.” You know? . . . I felt so upset that no one was listening to me.’ Her frustration led her to a razor blade removed from a pencil sharpener: ‘I didn’t question it, I just did it. It was like “Ahh, oh god that felt good! Ahh, that was such a release” you know? And it just went from there.’ At the time of our interview Sam was 21 years old and brimmed with energy and humour as she sat in a quiet corner of a London pub and talked openly about her experiences. She talked about how she still cuts herself occasionally, but not as much as when she was at school. ‘I would need to go to the [school] toilet’ she remembers, ‘and by the time I came out my whole arm [would be] just completely bleeding and . . . [I’d] be like “oh, thank god, and in a couple of hours I’ll do the same.”’

Unfortunately, Sam’s story is not uncommon. Since nonsuicidal self-injury[ii] first came to broad public awareness in the 1990s it has become a sadly familiar practice, used by many to experience and express feelings of distress, unhappiness and estrangement. A recent study found that the number of people using self-injury increased steeply over the first two decades of the new century. And there is good evidence to suggest that levels of self-injury increased dramatically during the covid-19 pandemic. But while Sam’s story may not be uncommon, it is nonetheless an individual and a very personal story. So what has sociology got to do with such a story? And what has sociology got to do with self-injury?

The sociologist C. Wright Mills (2000 [1959]) famously argued that troubles, no matter how personal, cannot be approached as purely individual affairs, but must be understood in their proper social context. Human beings, after all, are intensely social animals whose ‘I’ only emerges within the ‘we’ of a social community. We fashion our individual selfhood out of the social fabric of our common language, as well as the shared ideas, values and practices that make up our culture. Given this, we can expect that even a personal trouble as seemingly individual as self-injury will have its sociological dimensions.

But it is important to recognize that this does not mean denying the personal, or replacing psychology with sociology. Rather, as we argue in a new article in Sociology Compass, ‘The Personal is Social: Four sociological approaches to nonsuicidal self-injury’, the personal and the social go together, and must be understood together. So, for example, while language and culture are unquestionably social phenomena, they would not exist if it were not for the individuals who continue to use, embody, and reproduce them. It is important to understand, then, that the personal is always already social, and that the social is always already personal. And, as a result, finding the sociological dimensions of self-injury, far from denying or downplaying its psychological dimensions, works to put them into their proper context and give them their full meaning.

While our article for Sociology Compass is a survey of the sociological literature on self-injury, the social dimensions that are described in that literature are rooted in real people’s lives; and indeed we can find traces of these dimensions all through Sam’s story. They are there, for example, in the fraught family dynamics that led her to feel that she could no longer communicate with her parents, and that contributed to her turning to an alternative language of blood and wounds (‘it was just one of the most toxic environments that a child could have been brought up in’). They are there in the social institution of the school that both cultivated her anxiety, and draw her into a group of likeminded friends who also self-injured and experienced problems with their mental health. And they are there in the interactions she has had with clinical psychologists, psychiatrists and other medical professionals (‘I’ve seen lots of them . . . I can’t count them on all my fingers and toes’), including a ten-month stay at an inpatient psychiatric unit for adolescents. ‘They checked you for sharps’ she recalls. ‘Now most of the time that wouldn’t stop me but when I didn’t have them to hand I would punch walls.’

But it is not just the network of personal and institutional relationships that surround and shape a case of self-injury that gives it its social dimensions. As the Swedish social work scholar, Nina Veetnisha Gunnarsson, has recently made clear, self-injury is intimately connected with the very social feeling of shame (2021). And while, contrary to popular myth, self-injury is not about ‘attention-seeking’ in the sense of a selfish social manipulation, some consideration must be given to what attention a person who self-injures may legitimately need, as mental health activist Louise Pembroke has pointed out. ‘[I]f “attention” means being listened to and taken seriously’ she explains, ‘then along with the rest of the human race I’m attention-seeking’ (1996, p44–5). Perhaps, then, it would be better to think less in terms of ‘attention-seeking’, and more in terms of recognition-seeking (Steggals et al, 2020). Sam comments, ‘I feel [it] was a cry for help, and [you could] call it attention seeking. Yeah, well, I kind of did need attention. But it’s the way, it’s that way that you say it, isn’t it.’ She makes clear that, ‘sometimes [self-injury] really is just for yourself . . . a very private pleasure . . . [but] sometimes, yeah, you do want other people to understand how you’re feeling . . . and not necessarily [by] doing it vocally’.

There are also much deeper questions about self-injury, and the kind of self who self-injures, that sociology can help illuminate. For example, it might be tempting to think that self-injury has always been around, that it is just a part of what it means to be human. But a number of sociologists and historians have disputed this. They argue that self-injury is less a medical disease, or a psychological mechanism built-in to our brains, than a kind of cultural idiom: a practice that is historically and culturally specific and that resonates with a lot of people in late-modern society, giving voice to the contemporary experience of distress and estrangement. Consider that Sam’s self-injury seems to be strongly tied to her sense of individuality (‘you’re not letting me be who I want to be. I’m an individual, I should be able to do what I want to do’) not to mention the feeling of separation this sense of individualism emphasises between her inner-self and the outer-world. When she talks about her distressing feelings, she explains that they ‘need to be shown, because I need to get this out of me because this is just killing me now.’

More than this, while she sees the inner world of emotions, blood and wounds, as ‘genuine’ and authentic, she sees the outer world as dishonest and inauthentic: ‘what I struggle with as well [is] normal society, I don’t get it. I get it [but] I don’t agree with it . . . I just think we all should stop lying to each other . . . and we need to actually get to the point of what’s actually important in life, what’s, what’s real and what’s important, because half the things that we think are, are really not important.’ Self-injury gives Sam a way to mediate this characteristically modern ‘Western’ dilemma. She refers to her self-injury as so many ‘big statements’ about ‘how shit everything is. I just have to represent how sad I’m feeling about everything I see. Other people can brush things off, but me, oh my god, it hits me three times harder.’

Sam sat and sipped her drink as she continued to reflect on herself and her experiences. She is, of course, a unique individual; her story is distinctly her own. And in her lively personality, her demand for authenticity, and her oversized army surplus jacket, nose stud and multiple piercings, her individuality is confidently undisguised. But as the cultural critic John Berger puts it, the ‘”I am” includes all that has made me so’ (Berger, 1992 p370), and in this way we can recognize the effect of the social in Sam; not despite her individuality, but precisely within its shape and character. And if we ask ‘what is sociological about self-injury?’, we can answer that it occurs and unfolds within a whole network of close social relationships and institutional contexts; that it is, at least some of the time, as much about social communication and recognition-seeking as it is about venting anger, interrupting intrusive thoughts, or overcoming depersonalization; and that it may well be a kind of learnt practice that makes sense only within a certain kind of cultural context, and is of use only to the kind of self who emerges from within this context. In all of these ways, self-injury is as social as it is personal, and as sociological as it is psychological. The point is less to put sociology in opposition to psychology (and much less to create sociologically-derived therapies for self-injury) but rather to understand the personal better by understanding it more fully; by understanding it, in short, within its proper social context, as C. Wright Mills suggests. And at the end of the day, when it comes to self-injury, it is understanding that is most needed.

Peter Steggals is a visiting researcher at Newcastle University. His work focuses on the sociocultural dimensions of mental distress and disorder. He is the author of Making Sense of Self-Harm: The Cultural Meaning and Social Context of Nonsuicidal Self-Injury.

Ruth Graham is Senior Lecturer in Sociology at Newcastle University, UK, specialising in medical sociology. A key strand of her research focuses on sociological understandings of distressing life events, incorporating work on experiences of reproductive loss and understandings of mental distress.

Steph Lawler is a Reader Emerita in Sociology at the University of York. Her work largely centres on the relationships between identity and inequality.

[i] We have been working on self-injury over a number of years, trying to better understand its social dimensions. Sometimes it is more useful to convey what self-injury means by drawing on the words of those who have experienced it. In this blog we draw on Sam’s story to help illustrate what it means to take a sociological approach to self-injury. Sam (which is a pseudonym) was interviewed as part of a 2016/17 pilot study funded by The Wellcome Trust (ref: 201617/Z/16/Z). The authors are indebted to this institution for their support. And, of course, we would also like to thank Sam for generously providing her time and energy to help us explore this important issue.