Mirror, mirror on the wall… which one of the healthcare team am I? Understanding healthcare practitioners’ professional identities and what role professional regulation plays 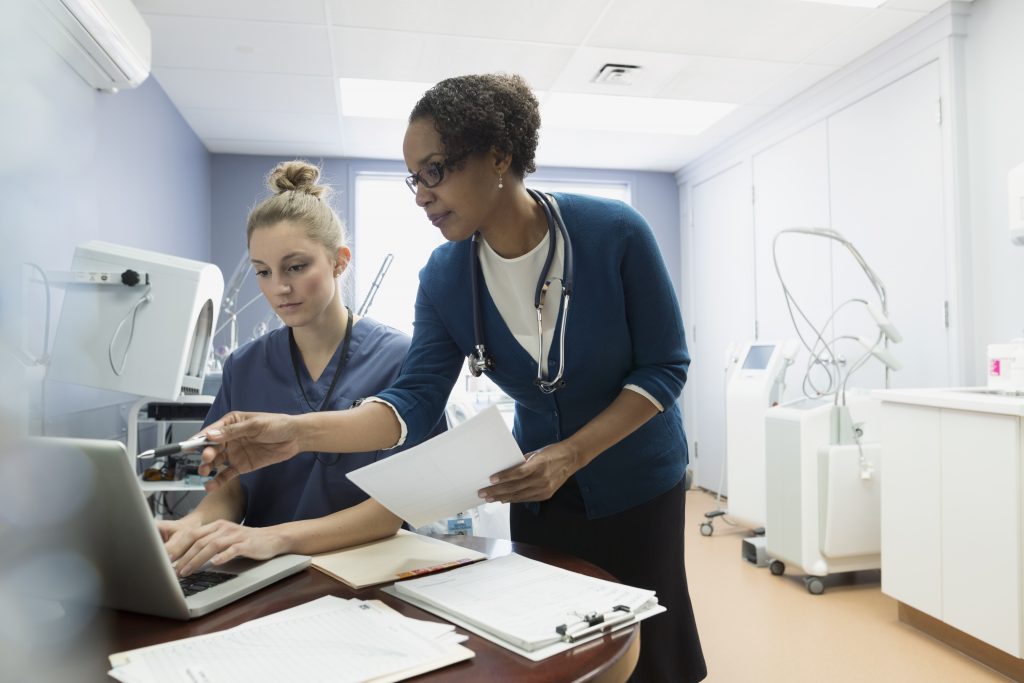 In this article, Policy Adviser Michael Warren outlines some of the themes and challenges that arise from the Professional Standards Authority’s work on understanding professional identity and regulation. The research can be found here.

Think of it, someone comes up to you and asks: “who are you?”. Where do you start? It’s a query that calls into question your entire identity. One place to start is your occupation, or ‘professional identity’. You may even have more than one professional identity, for example it has been suggested by one academic that a pharmacist can hold up to nine identities, such as ‘medicines maker’ and ‘manager’.[1] An identity can also be held across a team or over a whole profession. It is fluid and dependent on individuals’ own interpretations.

‘Relatively stable and enduring constellation of attributes, values, motives, and experiences in terms of which people define themselves in a professional role.’[2]

The Professional Standards Authority has been exploring professional identity and understand what, if any, effect professional regulators have on the professional identity of healthcare practitioners. Professional regulators work to protect the public by ensuring all practitioners on its registers are safe to practise. Many occupations, such as doctors, nurses and physiotherapists, are legally obliged to be registered with their regulator in order to practice. However, people wanting to practise occupations such as psychotherapy and acupuncture are not required by law to be regulated. The Authority was keen to learn if regulatory status had an effect on identity.

Regulation is just one of many factors affecting how practitioners develop and affect identity. Some of these factors are shown below. 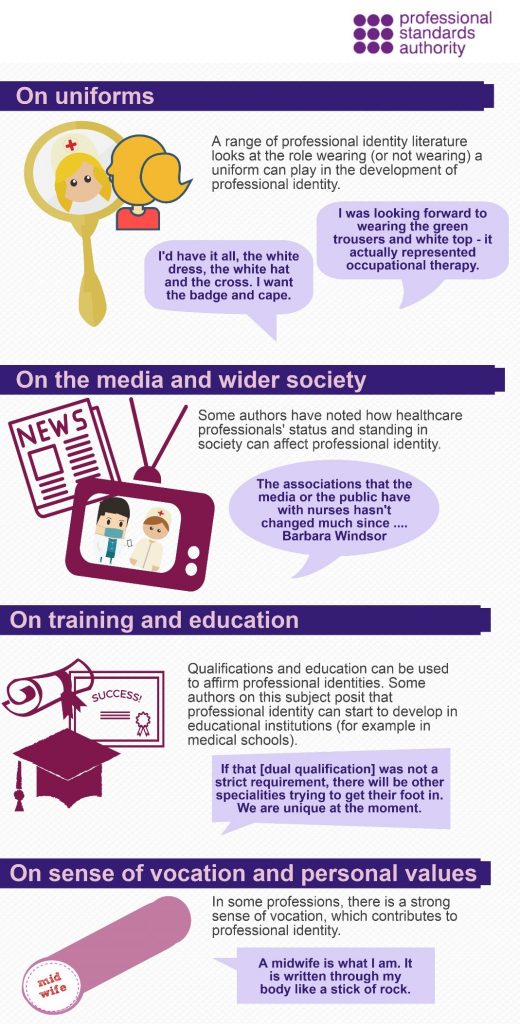 Our literature review found that, generally speaking, factors local to practitioners have the greatest effect on identity. Regulation does not often affect practitioner’s day to day practice and is not at the forefront of practitioners’ minds except in a crisis or out-of-the-ordinary circumstance like being disciplined by the regulator.

Our scan of the literature found that there was little primary research on practitioners’ views of regulation in identity. We commissioned Simon Christmas and Alan Cribb to interview physiotherapists, pharmacists, psychotherapists and acupuncturists.[4] These occupations were chosen for their mixture of regulatory status and to depart from the previous identity literature which is overwhelmingly focused on doctors and nurses. 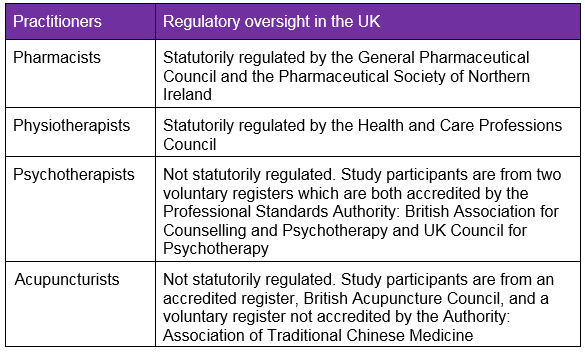 We found that as identity is how a practitioner sees themselves, regulatory registration has the capacity to validate and invalidate this self-perception. An individual practitioner can validate their own sense of professional identity through identity alignment with a wider community of like-minded practitioners via a register. Arguably the register is a record of the alignment of identities by those inside the community and an exclusion of those who do not align to these identities.

I do, therefore I am?

One of the factors we found to be important in creating identity is ‘doing the job’. For example, physiotherapists can carve out a unique professional identity in a multi-disciplinary team by applying specific skills of musculoskeletal healthcare.[5] However, enacting the skills of a practitioner is not enough on its own for a practitioner to gain a professional identity. Christmas and Cribb’s research posited that a healthcare practitioners’ identity comprises two components: a fundamental commitment to help, and a professional stance. The latter is defined as ‘an underpinning, coherent way of understanding and intervening in the world, which is more than just the mere aggregation of knowledge and skills’.

For most of a professional’s career regulators will be a validator, not creator, of identity but can have a more direct influence on identity through education and fitness to practise. The former recently come into focus in the General Medical Council’s report on professionalism education for doctors, which includes the suggestion by one education institution that ‘further work needed to be done on professional identity formation’.[6] Regulators could also consider how curricula best support the formation of identity across their respective professions. However, in this age of interprofessionalism, overlapping professional boundaries and ‘hybrid roles’, regulators may also benefit from looking at how curriculums can forge identities across teams and locations, as well as professions.

[1] Rebecca Elvey, Karen Hassell and Jason Hall, 2013, Who do you think you are? Pharmacists’ perceptions of their professional identity, International Journal of Pharmacy Practice, pp. 329-30.

[2] As summarised by Ibarra in: Ibarra H (1999) Provisional selves: experimenting with image and identity in professional adaptation. Administrative Science Quarterly 44: 764–91

[4] How does professional regulation affect the identity of health and care professionals: exploring the views of professionals, 2017, Simon Christmas and Alan Cribb

[6] Audit of the teaching of professionalism in undergraduate medical education, Point of Care Foundation, 2018.