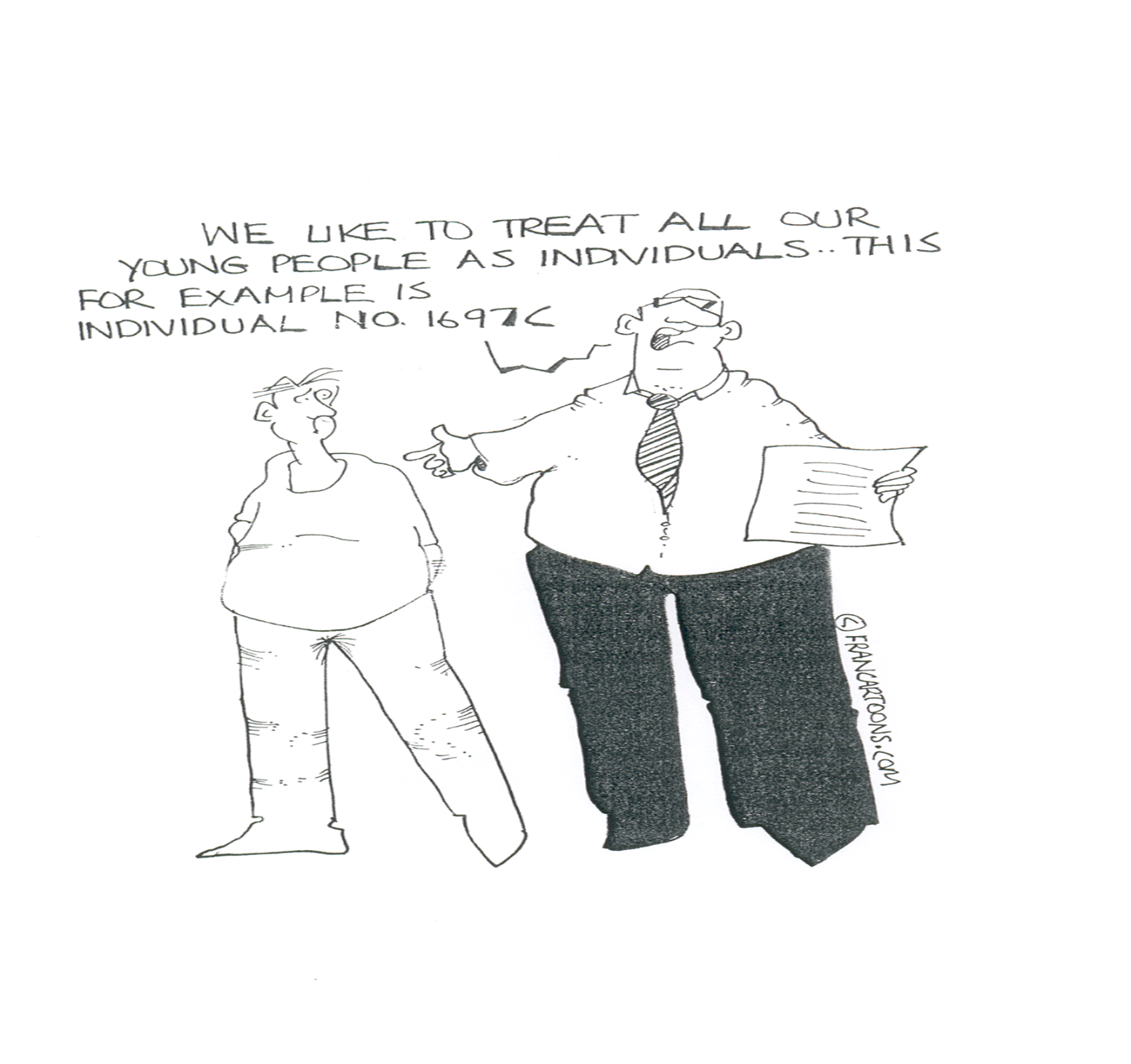 This cartoon is by Fran Orford from p.25 of Care Less Lives, the story of the rights movement of young people in care (Stein 2011).

The evidence has been well publicised: young people who have spent their formative years in public care are less likely than their peers to be in gainful employment, and more likely to become homeless, to become involved in crime or prostitution or to become long-term dependent on the state.  A closer inspection of the data tends to reveal a much more nuanced picture: a small group of care leavers are ‘movers on’ who achieve educational, employment and wellbeing outcomes that are similar to those of their peers in the general population. A much larger group are survivors: they enter care significantly behind their peers in key areas of development and although, given the right support, they make progress, it takes time to narrow the gap, and their achievements, occurring relatively late in life, often go unrecognised.  Only a relatively small group of care leavers fit the stereotype and struggle with very poor outcomes.

Nevertheless, we need to understand why, despite more evidence of success than is often acknowledged, the transition to adulthood from care can be problematic for too many young people who have been the responsibility of the state.

Papers in a recently published  Special Issue of Child and Family Social Work : Young people’s transitions from care to adulthood: exploring historical narratives explore the history of such concerns and the attempts that have been made to address them in six countries: England, India, Northern Ireland, Norway, Romania and  Switzerland. The papers present new empirical evidence concerning common issues that have persisted over time, with the object of introducing better understanding of the past  to the development of future policy and practice. The papers are written by members of INTRAC (International Research Network on Transitions to Adulthood from Care).

The individual papers each raise specific issues, related to the economic, social and political contexts of the different countries on which they focus. These include factors such as colonialism, the consequences of industrialisation, the transition from a communist regime, institutionalisation and the emergence of the children’s rights movement. An introduction is available here.

However a number of common themes run through all the papers, indicating that there is much to be learnt by exploring what the experiences of care leavers from different countries have in common, and how different societies have attempted to introduce policies designed to meet their needs.

Concerns about poor outcomes for care leavers are clearly a global issue: they have been raised in most European countries, the USA, Australia, Asia, Africa and South America and provide a common driver for policy initiatives. They are also long-standing – in England, for instance, the issue was first formally researched in 1874.

From at least the sixteenth century, and in every country studied, entry to care has been associated with poverty, stigmatisation and other forms of disadvantage.  In countries and at times where extreme destitution is common and there is inadequate welfare provision, many children would die if they did not enter care. However while care systems may increase the chances of survival, they are rarely able to offer sufficient therapeutic support to enable children to overcome the consequences of earlier adversity, including maltreatment which many have suffered. In this context it is unsurprising that too many care leavers fail to achieve ‘normative’ outcomes.

Moreover, not all children who enter care are protected from further harm. There is widespread global evidence of sexual, physical and emotional abuse within care systems. Although this has only become known over the last forty years or so, it is evident that it has occurred over a far longer period.  Now that this issue has come to light, the abuse of children in care may be less prevalent – we do not know how extensive it continues to be. However, historically, poor outcomes can be related to failures to address abuse and its consequences both before and after entering care.

The abuse and stigmatisation of children in public care could only happen because poor and socially excluded parents lacked both power and powerful advocates. This was particularly true of the parents of illegitimate children, who are over-represented in care populations and who, until the late twentieth century, were deliberately stigmatised in most Western societies. Parents’ powerlessness made it possible to introduce policies designed to sever the relationship with their children. Many children were placed in institutions to which parents had no access, and where the strict regime was designed to suppress individuality and enforce conformity to the norms of the dominant culture – in India under the Raj to Christianity, in communist Romania to a socialist ideal. However when they left care these young people were ill-equipped for independence and dissociated from their culture and traditional family links; with no one to support them as they made the transition to adulthood it is not surprising that many floundered.

Many of these persistent concerns reflect unresolved issues that come to prominence at different times in different societies. The purpose of care is often unclear: should it be to protect troubled children or to protect society from the trouble they cause? (Norway); should it be to instil conformity or to promote individual opportunity? (Romania, India, Switzerland, England 19th Century); should it be to provide food and shelter or to help children fulfil their potential? (England 20th Century, Northern Ireland).

One of the most difficult questions concerns the problem of ensuring that care leavers are adequately supported into adulthood while at the same time reducing dependency on the state. If children in care are sent out to work early they are less expensive to keep, but at the same time they may be less able to cope with independence. In England and Northern Ireland until the late twentieth century this conflict was exacerbated by the ‘less eligibility’ principle, which stated that it was unfair for the state to give more to pauper children than the ‘independent labourer’ could provide for his family. In countries with strong welfare regimes, such as Norway, this argument was inverted – it was unfair to give care leavers more than the state would provide for other children.

This question is still unresolved. Care leavers are no longer expected to become independent at 13 or 14, as they were 150 years ago in England and Northern Ireland. However pressure to reduce dependency means that in most countries they still tend to experience compressed and accelerated transitions, having to cope with leaving home, leaving school, starting work, managing their own cooking, cleaning and finances and sometimes becoming a partner or a parent simultaneously, while their peers achieve independence in stages and at a much older age.

The last fifty years or so has seen some progress. Children are no longer stigmatised because they are illegitimate, and physical and emotional abuse are no longer generally regarded as acceptable forms of punishment. Perhaps the greatest change has been the recognition that children have rights as well as needs. The United Nations Convention on the Rights of the Child has provided an incentive to provide better support for care leavers in India and Romania, while the rights movement engendered by young people in care has given care leavers in numerous countries the agency they needed to drive forward changes and to advocate for themselves.

All six countries represented in the Special Issue have now introduced legislation specifically aimed at supporting care leavers; however not all have had the resources to implement it. There is also evidence of new systemic injustices: in England, for instance, increasing numbers of 16-19 year olds have been placed in unregulated, semi-independent placements. Globally, the Black Lives Matter protests are a powerful reminder that the legacy of Empire and colonialism includes a spectrum of racism which many Black and minority ethnic care leavers have to confront every day. Also, following the financial crash of 2008 there has been an increase in indicators of exclusion and disadvantage such as homelessness and poverty in many societies. These are likely to be exacerbated following the Covid-19 pandemic and will disproportionately impact on those who are most vulnerable. Care leavers are included in this group, and their experiences illustrate the adage that: ‘any society, any nation should be judged on the basis of how it treats its weakest members – the last, the least, the littlest’.