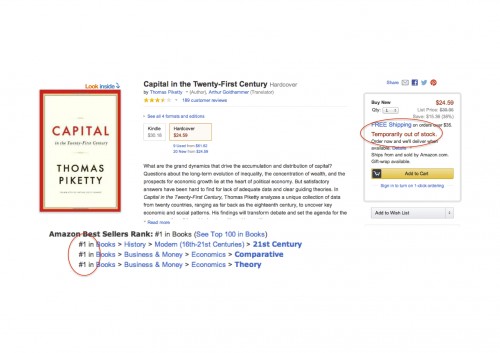 Piketty is everywhere. Both the French professor himself – always impeccably dressed in smart suits and equipped with the cutest French accent imaginable – and his latest book ‘Capital in the Twenty-First Century’ are all over the media, intellectual book-clubs and university common-rooms. He is #1 on Amazon (or on several Amazons in the US, the UK and France) and the hard cover version is sold out both in French and English. Piketty spoke on Reuters TV, CNN Money, MSNBC, WNYC and gave talks at the IMF, the GAO, CUNY, Columbia and NYU – all within his two days promo-push in Washington and New York last week.

Not only did Piketty himself get overwhelmingly busy recently, but every columnist, opinion writer and wanna-be journalist felt the need to grab a sniff of the new wunderkind of academia. Hundreds of reviews, comment pieces and op-eds have been written about the man and his theses. The most prominent among them might be Krugman’s highly NYRB piece and Daniel Shuchman’s rather critical WSJ review.

Piketty’s thesis is too complex and fine-grained to be replicated in any review and enough people have already attempted to pay tribute to his breathtakingly extensive statistical analysis. In simple terms, however, it reads as follows: capitalism is not fair. It does not distribute income equally, but to contrary allows wealthy dynasties to become even wealthier. His solution is technically simple but politically impossible, almost utopian-idealist: a progressive global tax on private property. Piketty confirms what Occupy and much popular intuition have always known, but so far failed to translate into sustainable action.

But who is it that reads this 700-page-mammoth-book (or the chatter about it) on inequality? Justin Wolfers analysed Google-Correlate data to answer this question at least for the US. His findings are not surprising: it is the liberal cities and states (hosting Ivy-League unis) such as Washington D.C., New York, Massachusetts and California that drive the volume.

Google, however, is only really helpful when it comes to big, big countries, with a lot of people using the internet; it fails already in Europe. Here, Google is blunt enough to point out that is mainly in Paris and London where people are interested in the search term ‘Piketty’. In Germany, there wasn’t even enough volume to come up with any statistics at all (no wonder: Germans really don’t like reading English or French). So I looked at news outlets to see what the book does in Europe.

One of the first articles in the British press was Andrew Husseys’s longform piece in the Guardian on April 13. It got 33k shares on Facebook, 1,500 Tweets and 500 comments onsite. Surprisingly, most other news outlets, commentators and usual propagandists remained silent. The Telegraph eventually condescended to write a blog-post about an apparent flaw in Piketty’s argument – almost two weeks after the Guardian and without much engagement from readers. No mention in the Times at all. Even the Economist published a blogpost (not even close to a full-length piece) only two days ago.

The picture is mirrored almost accurately in Germany: it is liberal newspapers such as the Zeit, the Munich daily Suedeutsche and the leftist-intellectual staple der Spiegel which report on Piketty. Not a single – even critical – mention from the conservative guardians of public moral at FAZ, Focus and Co until today.

I am not expecting the Daily Mail, the Sun or the German equivalent of the Bild to suddenly become interested in left-wing economics. Selective exposure theory or confirmation bias arguments have for years provided a credible explanation: people don’t like to read things that would challenge their values and opinions. A conservative (or Republican) is unlikely to even engage in Piketty’s discussion. No need to print a piece on it at all then.

For me, Piketty’s reception so far raised a much wider question of what the ‘working class’ is doing – and who they are following. Piketty is making a claim about inequality, but most people that are interested in this claim at the moment are part of a very solid middle if not top part of the income pyramid. Where are all the people using commuter trains to New York, London and Paris every day (and where were they during Occupy)? True, some of them were too busy earning the little money they could rather than turned round to engage in intellectualism or protesting. And obviously, high-pitched economic ideas need a while to trickle down but as The Economist comments, socialist France so far still hasn’t reacted very much to his new rock star economist even though the book had appeared there already in 2013. The potential main reason: Piketty is not saying anything new. Debates about inequality and the importance of the welfare state have been central to some European countries for years (in Germany’s case more than a century to be precise). In a way Piketty is not left-wing enough to stir any serious attention.

But is that really true? Might it not rather be a problem of demand? I would think that this is again a slightly distorted view that academia – or an intellectual class – has of itself: ‘The Europeans all know how unequal everything is. We really don’t need to talk about that anymore.’ Does the general readership of the Sun think about inequality a lot? Let’s assume they do, does the Sun then only not report on Piketty because his suits are too expensive and as such render him inauthentic? Wouldn’t they want to tell their readers about Piketty’s ideas that could help them to be better off in the future if they were actually ‘believing’ in inequality already (according to the selective exposure theory)?

Perhaps, the working class is not left-wing anymore – at least not when it comes to inequality.  They have a lot to do defending the UK against too many immigrants and the EU (see UKIPs recent campaign). And they also like their dreams (the European version of the American one). This is what makes them love looking at pictures of celebrities, expensive jewellery and fashion (in the Daily Mail). Piketty might actually be too left-wing for a nowadays in this sense right-wing working class.

So, even the hope that the mass-reception of Piketty’s book in Europe is really still to come doesn’t really stand up. It is true: while in the US, the New York Times reported at least 9 times about Piketty’s book over the last three weeks, only 4 of the last 50 news pieces on Piketty came from Europe. At least, Piketty is in London today (and returns in June).  Perhaps the Daily Mail will print an analysis of Piketty’s tasteful suits on page 17 tomorrow. Let’s make him a celebrity first and then slowly think about his arguments. One step at a time.